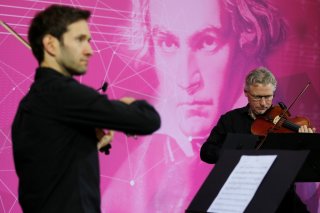 This year marks the 250th anniversary of the birth of Ludwig van Beethoven. In just forty-five years, he wrote approximately 750 works. Even people with little interest in classical music will most likely have heard at least one of them, whether Beethoven’s wonderful “Symphony of Fate” (his fifth) or his “Eroica” symphony (his third), or perhaps one of his many piano sonatas, such as the Moonlight Sonata, or his piano composition, “For Elise.” Even if someone is unfamiliar with these masterpieces, there is almost nobody who hasn’t at least heard Beethoven’s Ninth Symphony, which was first performed in Vienna on May 7, 1824. The performance was officially conducted by Michael Umlauf, although Beethoven shared the stage with him. It is reported that the great composer tried to reproduce the expressive content of the music with wild gestures, flailing about with both his hands and his feet. The musicians, however, ignored the almost totally deaf Beethoven, who could no longer hear his own music and certainly could not conduct it.

Beethoven, who came from a family of musicians, had begun his musical career as a pianist and originally set his sights on becoming a conductor rather than a composer. Then a health problem sent his life in a different direction. In the beginning, his hearing difficulties were apparently harmless: the first symptoms appeared in his left ear, but soon his right ear was also affected. Fortunately, he didn’t have any problems playing the piano, although he did find it increasingly challenging to conduct conversations as he found it more and more difficult to follow what other people were saying. He even experimented with various home-made ear trumpets, but they proved ineffective. As Beethoven’s deafness became more pronounced, he asked his piano maker to construct louder instruments. Conducting also became more and more challenging because he could no longer hear the orchestra. At a rehearsal for his only opera, Fidelio, he created such chaos and confusion that he had to be removed from the conductor’s pulpit. As his hearing continued to deteriorate, he found he could only communicate if other people shouted directly into his ear. When even this approach failed, he resorted to communicating in writing, in what he called “conversation books,” which have today become a unique historical resource.

But, like all great and successful people, Beethoven succeeded in turning this disadvantage into an advantage. Successful people, just like everyone else, are constantly confronted by crises and challenges, but what makes them different is that they are able to seize opportunities as they emerge, even during a crisis. Despite falling into temporary despair and, fleetingly, considering suicide, Beethoven’s deafness in one respect actually turned out to be more of a blessing than a curse. Since there was no way he would be able to forge a successful career as a concert pianist, he devoted himself exclusively to his work as a composer. As his hearing failed, Beethoven actually benefited from the fact that he was increasingly forced to retreat into himself and draw inspiration from his own imagination. This allowed him to concentrate on his music, which many at the time described as unusual—and for some ears quite unfamiliar—independently of prevailing tastes or external influences. When he composed his Ninth symphony he was already deaf and, as many people might not know, half-blind.

Among the secrets of his success were his unwavering focus and his habit of delegating as many things as possible to other people. Most of the time, his income was by no means small, but he also spent a lot of money to ensure that he could focus entirely on his compositions. He employed domestic assistants, copyists and lawyers, and occasionally had his brother conduct contract negotiations on his behalf. Other composers earned additional money as teachers, but Beethoven did not want to be distracted by this either. It was only for exceptionally talented students or pretty young women that he liked to make an exception. And, although he was often madly in love, he never married or had children.

Beethoven, who dedicated his entire life to music, died on March 26, 1827, and was buried a few days later. Tens of thousands of people lined the streets for his funeral cortege. His life is an example of how, with the right attitude, disadvantages can be turned into advantages. In doing just this, Beethoven has a great deal in common with brilliant scientists, musicians, artists and writers such as Stephen Hawking, Ray Charles, Andrea Bocelli, Frieda Kahlo and Helen Keller, all of whom prove that the mind can overcome any obstacle if people see themselves not as victims of adverse circumstances but as forgers of their own destinies.