Lindsey Graham: The Avatar of Fear 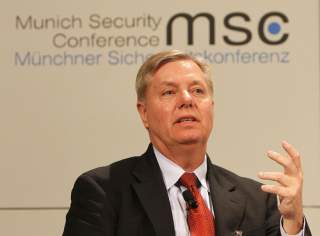 Over the past several months, Americans have heard many dire predictions about the magnitude of the threat presented by the Islamic State of Iraq and the Levant (ISIL). This weekend, on Fox News Sunday, Senator Lindsey Graham made one of the more extreme assertions yet. Arguing that President Obama’s plan to fight ISIL through air attacks was insufficient, he warned that calamity would strike unless the United States deployed ground troops in Iraq and Syria. ISIL “will open the gates of hell to spill out on the world,” he said. Graham concluded, “This president needs to rise to the occasion before we all get killed back here at home [emphasis added].”

This, of course, was absurd hyperbole. But it’s par for the course for the South Carolina senator. Whenever there is a crisis somewhere in the world, you can count on him to take a real threat to the United States or international security and wildly exaggerate it in order to scare the bejesus out of the American people. Lindsey Graham is the closest thing U.S. politics has to an avatar of pure fear.

Consider some of Graham’s other statements over the past year and a half:

—July 2013: “We live in the most dangerous times imaginable.” No, we don’t. You have to have a basic lack of knowledge of history (not to mention lack of an imagination) for that assertion to make any sense. Consider, for example, the two world wars, or any number of close brushes with all-out thermonuclear war during the Cold War. Or, say, the era of the Black Death, which killed a jaw-dropping one-third of the entire population of Europe in the 1300s.

—September 2013: “Chemical weapons in Syria today means nuclear weapons in the U.S. tomorrow.” Graham did not try to spell out the chain of logic by which the former would actually lead to the latter, which is probably just as well, because it would take a Glenn Beck–style chalkboard diagram to do so.

—January 2014: “The world is literally about to blow up.” As of this writing, about eight months later, the world has not yet literally blown up.

—March 2014, on the Ukraine crisis: “It started with Benghazi. When you kill Americans and nobody pays a price, you invite this type of aggression.” So, according to Graham, because America did not respond forcefully enough to a tragic attack on its consulate in Libya, Vladimir Putin felt emboldened enough to invade Ukraine. It almost goes without saying that there’s not a shred of hard evidence to support this claim. Using this logic, one could just as easily claim that any aggressive action taken by any country on earth since September 2012 was due to Benghazi.

There are plenty of additional examples, but there’s a larger point to be made—namely, that this kind of rhetoric has consequences. And Graham is far from the only prominent figure to use such rhetoric with regularity. As Micah Zenko and Michael A. Cohen observed in Foreign Affairs in 2012, threat inflation is endemic among leaders across the U.S. political spectrum. The result, unfortunately, is that the American people come to believe a lot of badly mistaken things about world affairs. According to a 2010 CNN poll, for example, 71 percent of Americans wrongly believe that Iran currently has nuclear weapons. A Gallup survey in 2013 found that 47 percent think that the United States “is only one of several leading military powers” as opposed to “number one in the world militarily.” And let’s not forget that as late as August 2003, 69 percent of Americans still told the Washington Post that they thought it was “very” or “somewhat” likely that Saddam Hussein “was personally involved in the September 11 terrorist attacks.”

ISIL—the current number-one object of America’s fear—is without question an appalling, monstrous organization. Yet it does us no good to exaggerate the threat that it poses. 71 percent of Americans told CNN recently that they believe ISIL currently “has terrorists in the United States.” As Slate’s David Weigel pointed out, voters “could not possibly know” whether this was true or not, and there’s no clear reason to think that it is. It’s little surprise that they did come to believe it, however, after a series of months in which declarations that ISIL was “an imminent threat to every interest we have,” as Secretary of Defense Chuck Hagel put it, were commonplace from American officials.

When citizens come to believe inaccurate things about the world as a result of threat inflation, that can’t be good for public policy. Or, as Lindsey Graham might put it, we’d better start to cure our addiction to threat inflation before we all get killed back here at home.