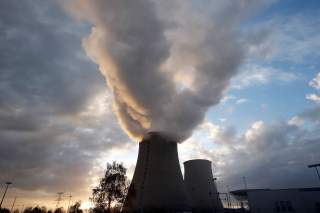 President Donald J. Trump loudly opposes the Russian Nord Stream 2 pipeline, quoting the threat of European dependency on Russian energy. Meanwhile, Moscow is using every opportunity to boost its clout on the continent, while the European Union’s decision makers are up at night worrying about energy security.

However, Western energy security policy needs to distinguish between strategic responses and vested interests, which post-Soviet elites combine with the centuries-old fear of Russia.

The North Stream 2 stand-off is a part of a tug of war going on in Europe over energy security. For instance, there is also a geopolitical and environmental struggle over the prospect of a Russian-built nuclear power plant near the Belarusian town of Ostrovets.

On one side is Lithuania which is vehemently opposed to its construction. The Lithuanians claim that the power plant is not safe and that it is being used as an ‘unconventional weapon’ against their country. They also say that once completed the plant would be used as a geopolitical tool by Russia to increase the region's dependency on Russia's energy supply.

To avoid that scenario Lithuania wants Brussels to subsidize a disconnection from the former Soviet grid: a total break in power supply from Russia and Belarus. As Brussels seems to hesitate to embark on a multibillion blockade project, Vilnius is calling on the U.S. to intervene.

Lithuania’s calls for a new electricity ‘iron curtain’ is wrapped in the banner of Western solidarity against Belarus and Russia. However, a close look would discover that all new nuclear reactor projects in the world face resistance. Anti-nuclear groups like Greenpeace or the Friends of Earth, along with countries like Germany and Austria, claim that reactors are not safe.

However, last week the EU nuclear safety regulators group (ENSREG) gave the Ostrovets nuclear power plant an “overall positive” assessment. This conclusion followed stress-tests designed by the EU to ensure compliance with the strictest safety standards. It was the latest in a series of international inspections, including a number of missions by IAEA, which noted that “the plant's design parameters accounted for site-specific external hazards, such as earthquakes, floods and extreme weather, as well as human-induced events."

Lithuania is still not impressed. As an EU official once put it in an interview with the WSJ, “you will never satisfy the Lithuanians, they simply don’t want the project.”

Maybe Lithuania's geopolitical fears make a better argument?   Indeed, if the Russians or its allies control a share of electricity capacity sufficient cause a power supply disruption in a NATO member state, it may be a significant energy security vulnerability.

Yet, the figures tell a different story. According to Eurostat, the EU statistics agency, as of 2015, Lithuania had almost 3.6 GW of net installed power generation capacity of which, about 2 GW was natural gas. The LitPol and Nordbalt interconnection links with Poland and Northern Europe add 1.2 GW resulting in 3.2 GW of perfectly dispatchable power supply, independent from either Belarus and Russia. Maximum capacity demand in Lithuania at peak load in winter is estimated to be between 1.8 and 2.3 GW. This implies a significant energy security safety margin and means that even if Russia or Belarus decided to cut Lithuania off, Lithuania would hardly notice. Neither Russia nor Belarus would have any leverage to use interruptions in power supply as a threat to influence Lithuania politically.

On the contrary, the Ostrovets plant, paradoxically as it may seem, helps to reduce the region’s reliance on energy supply from Russia by diversifying its energy mix away from natural gas.

In fact, the fuss over the Belarusian nuclear project may have commercial, not strategic roots. An apparent anti-nuclear ‘awakening’ in Lithuania coincided with the construction of the Klaipeda floating LNG Terminal launched in 2014. That terminal is suffering from heavy losses, with no more than 20 percent of its capacity being used.

Having invested almost half a billion euro in the LNG terminal alone, Lithuania even introduced "purchase obligations" mandating utilities to buy its share of LNG supplies from Norway and the United States to keep the project afloat. Moreover, the current electricity prices in the region are still too depressed to burn natural gas, and it is cheaper to import electricity from neighboring countries. For example, last summer Lithuania imported about 80 percent of its power.

The West must be more cautious in offering its support, be it the money from Brussels, or the political clout from the United States. The threat of Russia abusing its energy market power in Europe is real, but not in the nuclear sphere.

Lithuania’s resources are limited. They should be deployed to protect the common good—not financial interests of sectoral business elites.

Dr. Theodore Karasik is a Non-Resident Senior Fellow at the Lexington Institute and a national security expert specializing in Europe, Eurasia and the Middle East. He worked for the RAND Corporation and publishes widely in the U.S. and international media.

Image: Steam rises at sunset from the cooling towers of the Electricite de France (EDF) nuclear power station at Nogent-Sur-Seine, France, November 13, 2015. The nuclear industry argues world leaders at the COP21 conference in Paris next week should not have to choose between nuclear and renewables but between low-carbon energy, including nuclear, and fossil fuels. Paris will host the World Climate Change Conference 2015 (COP21) from November 30 to December 11. Picture taken November 13, 2015. REUTERS/Charles Platiau TPX IMAGES OF THE DAY