The Little-Known Loophole in the Nuclear Nonproliferation Treaty 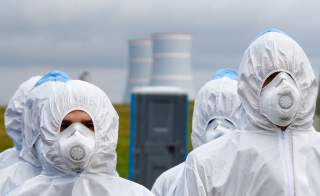 In four short months, U.S. officials will be engaging representatives of 189 other members of the Nuclear Nonproliferation Treaty (NPT) on how to strengthen the agreement. Washington has previously pushed policies at odds with the treaty—giving India a waiver on nuclear trade and opposing treaty-backed Middle East Nuclear Free-Zone talks—and has limited diplomatic clout to gain support for stricter rules at this April’s NPT review conference. State Department negotiators would do best to focus on the one NPT-failing the department already has identified—tightening the treaty’s overly lax withdrawal provision and eliminating the uncertainties about continuing International Atomic Energy Agency (IAEA) inspections if a state does withdraw.

In a 2018 speech on the Nuclear Nonproliferation Treaty, Assistant Secretary of State for International Security and Nonproliferation Christopher Ford identified these failings as a major gap in the protection the treaty provides against nuclear proliferation: “On the issue of withdrawal, the nonproliferation regime clearly has not yet fully learned or adapted based on the lessons of experience.”

North Korea’s cavalier rejection of its NPT membership in 2003 is a prime example, but many saw it as a case not applicable to most member states. However, more recently, Saudi Arabia, and Turkey and Iran (which, after the killing of Maj. Gen. Qassim Suleimani, is looking for new ways to upset Washington), have gone so far as to layout terms under which they would leave the treaty and even obtain nuclear weapons, statements without precedent in the treaty’s history.

A number of otherwise respectable member countries, such as South Korea, also have political parties in their legislatures that advocate treaty withdrawal and acquisition of nuclear weapons.

We have to take seriously the possibility that—without international action to arrest this tendency—the already frayed bonds that tie countries to the NPT and the pledge not to acquire nuclear weapons may not hold. This would presage a world with many more nuclear states and a vastly increased risk of nuclear use.

Part of the responsibility for this state of affairs must surely land at America’s doorstep. If the United States doesn’t care enough to do something to firm up the treaty, then it won’t happen. The long-term problem is reducing the incentives for countries to seek or even to threaten to seek to obtain nuclear weapons.

But first things first. The immediate problem is to hold the treaty members together by making withdrawal a much more difficult and unattractive option. That has not, so far, been a successful endeavor. Some member states still jealously guard their legal right to withdraw and agreement on tightening the rules has, in Secretary Ford’s description, “remained elusive.”

It’s vital, at the very least, however, to eliminate one of the seeming attractions of treaty withdrawal. It seems hard to believe, but it is still unclear what happens to the inspection agreements between members and the IAEA if a country withdraws from the treaty. On the face of it, the validity of the basic IAEA agreement with a country is tied to its adherence to the treaty.

One wants to make the application of IAEA inspection perpetual so that a country cannot withdraw and use previously inspected facilities for military purposes. There is a good deal of sentiment among members in this direction but no specific agreement has been made. Additionally, neither the U.S. president or his top advisors have come down firmly on these matters.  Progress, though, won’t be possible without them weighing in.

There is not even agreement on the status of safeguards for cases like North Korea, which left while in violation of the treaty (for preventing IAEA inspection of waste sites that would likely have revealed plutonium production in excess of what North Korea told the IAEA). When North Korea announced its withdrawal from the treaty, there was a great deal of international hand-wringing, yet apparently no one thought of insisting that a country in violation of inspection provisions could not legally free itself of its obligations by withdrawing. It matters even to a rogue state whether it is clearly branded in continuing treaty violation.

What would the NPT community do about a country that is abiding by the treaty but that also wants out of it and is willing to continue IAEA inspections on existing energy facilities? Some countries (e.g., Turkey) may opt for this course, not to build weapons immediately but to get more elbow room for doing so sometime later, or perhaps just out of frustration with the dominance of the five authorized nuclear powers.

Remember, the treaty itself does not bar NPT members from selling to nonmembers, so countries withdrawing, depending on their alliances, may not necessarily suffer for departing the treaty.

Unfortunately, the nuclear community is so absorbed with possible repeats of the North Korean withdrawal-and-crash program and the possibility that Iran will quickly produce a bomb that it is ignoring the possibility of a slow leakage of membership that could render the treaty inoperative.

That said, despite harboring concerns about these issues, U.S. credibility with the NPT community is limited. It did not help, for example, that the George W. Bush administration cooked up a 2008 deal with India, which had fiercely opposed the NPT. That deal essentially gave it all the privileges of NPT membership while retaining its nuclear weapons. It did not help that President Barack Obama trashed the convening of a 2012 conference to discuss proposals for a nuclear-free Middle East—because Israel didn’t like it—even though the 2010 NPT Review Conference proposed it and Obama’s conference representatives voted for it.

Because America’s political capital on nonproliferation is limited, Washington’s ability to persuade other countries is limited, too. The State Department should use the upcoming 2020 NPT Review conference as an opportunity to concentrate on its most immediate concern: closing the gap in the NPT system that Secretary Ford pointed to—the current overly lax provision for a withdrawal and eliminating the uncertainties about the continuation of IAEA inspections. Right now, nothing related to the NPT is more important.

Victor Gilinsky is program advisor for the Nonproliferation Policy Education Center (NPEC) in Arlington, Virginia. He served on the Nuclear Regulatory Commission under Presidents Ford, Carter, and Reagan. Henry Sokolski is executive director of NPEC and the author of Underestimated: Our Not So Peaceful Nuclear Future (second edition 2019). He served as deputy for nonproliferation policy in the office of the U.S. secretary of defense in the Cheney Pentagon.