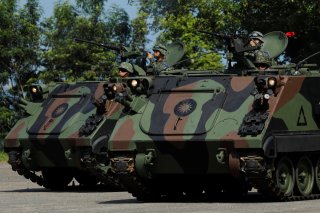 It is 2028 and Xi Jinping has begun his fourth term as president of the People’s Republic of China (PRC). After a month of threats, he sends wave after wave of the Chinese People’s Liberation Army (PLA) to invade Taiwan. Scholar Lyle Goldstein writes, “Between parachute and heliborne forces, China could quite reasonably hope to put 50,000 soldiers on the island in the first wave and well over 100,000 in the first 24 hours.” This is the common conception: China launching a massive conventional assault on Taiwan. But what if China did not attack with conventional troops? What if it used covert forces trained to win without fighting? Such a scenario presents vexing challenges for a conventional mindset. Already, U.S. intelligence officials are warning that the PRC wants to peacefully take Taiwan and is “working hard to effectively put themselves into a position in which their military is capable of taking Taiwan over our [U.S.] intervention.” Thus, as America considers how to defend Taiwan against conventional forms of invasion, it must also pay significant attention to attack along non-traditional vectors.

Although the PRC has never controlled Taiwan, it has consistently claimed the self-governing island as its own. Beijing’s lack of amphibious capability and fear of U.S. intervention have kept Taiwan free thus far. However, the PRC has focused decades of effort on remedying these deficiencies. Under Xi’s centralized rule (and particularly during Covid-19), Beijing has intensified its pressure on Taiwan. For a leader who exalts himself as a new Mao deity, the prospect of such a glorious prize lying a mere hundred miles off his coast and the bitterness of its growing estrangement from the mainland makes Taiwan a tempting target.

In defending Taiwan, Washington’s goal would not be to comprehensively defeat China, but rather to defeat the invasion — to deny China its goal of subordination. America, Taiwan and any other partners willing to enter the fray would need to concentrate on stopping the invasion, putting every available hindrance in the way of China’s armada and aircraft. Think sea mines and anti-ship and anti-air missiles launched from various platforms on land, at sea and in the air.

Indeed, conventional warfare between large states has seemed unlikely to many prognosticators. Russia’s invasion of Ukraine should dispel this belief. Moreover, as seen in the 2020 Nagorno-Karabakh clashes, substantial strategic thought and planning is needed to anticipate future unconventional methods and new technologies, which can upend traditional ways of fighting.

When PRC leaders decide to act against Taiwan, it will be asymmetric, swift, and ambiguous to avoid a conventional conflict with the Taiwanese military and its allies and partners. Since the Russian invasion of Ukraine, Beijing is likely learning “Taiwan Invasion Lessons” and rethinking its invasion strategy, plans, and tactics. While some commentators are drawing conclusions for how Taiwan might better defend itself from a future PRC invasion, these analyses assume a primarily conventional assault, like Russia has done in Ukraine.

Based on recent Homeland Defense Institute fieldwork in Ukraine and Baltics, this article presents a potential Chinese invasion of Taiwan scenario, initially created during a Fictional Intelligence workshop with August Cole and Peter W. Singer. The scenario, dubbed “Little Red PRCs,” was red-teamed with over a dozen irregular warfare subject matter experts. We have adjusted and updated it as a thought experiment reflecting a plausible multi-domain assault on Taiwan, premised on Chinese goals of minimizing the danger of third-party intervention. As best described by Chiu Kuo-cheng, Taiwan's defense minister, “The Russia-Ukraine war has informed all countries, including our own, and our enemy is no exception … We have a very good opportunity to learn, and we will use it.”

Successful land grabs, such as Russia seizing 20 percent of Georgia in 2008 and Crimea and the Donbas in 2014, Turkey taking a third of Cyprus in 1974, and even the Mexican-American War (1846-1848), required the aggressor to act with speed and ambiguity and for the weaker state to be experiencing societal upheaval and state weakness.

The Republic of China (ROC) has come a long way since establishing its government in Taiwan in 1949. From initial PRC plans of retaking the breakaway ROC island with paddleboats in the 1950s to the U.S. military serving as a buffering patrol force (1950-1979) in the Taiwan Strait, observers view recent PRC military exercises through the lens of a “large-scale amphibious invasion” against Taiwan. However, with the main island of Taiwan having few suitable sites for an amphibious landing—not to mention these regions being heavily fortified and defended—there is no reason for PRC leadership to rely on a military maneuver resembling D-Day.

A future PRC intervention scenario based on deception, intent, capabilities, past behaviors, and current conditions could play out in a multi-domain fashion against Taiwan like this:

To maximize ambiguity, PRC planners would align their irregular assault on Taiwan to take place during a projected space weather event (solar activity impacts can be predicted up to two weeks in advance). To avoid suspicion, a large number of forces would already be in the region due to monthly military exercises between Southern (南部战区) and Eastern Theater Command (东部战区). A multi-domain strategic campaign against Taiwan would alleviate pressure to deploy conventional forces as quickly.

With global awareness about pending impacts to electrical grids, GPS, and a host of systems that utilize the electromagnetic spectrum (EMS), the Chinese military would begin a massive EMS operation against critical infrastructure in Taiwan to degrade various services (e.g., internet, cellphones, electricity, etc.). Simultaneously, China would selectively restrict data flow in its Pacific undersea cable networks and the twenty-one undersea cables connected to Taiwan. With Taiwan isolated and many services denied, disabled, and degraded on the island, cyber and EMS operations would target and spoof military and civilian radars and GPS tracking capabilities. This would enable commercial aircraft and civilian ships—each filled with “Little Red PRCs” (covert Chinese troops wearing Taiwanese livery and Red Cross patches)—to quietly land and dock at the twenty-two airports and thirteen seaports across Taiwan.

As these “Little Red PRCs” egress their aircraft and ships, a massive sociopolitical-information warfare campaign about a dangerous viral outbreak in Taiwan would spread across Taiwanese social media and also on Twitter accounts in the United States and Europe. Chinese EMS operations would align with influence operations in sending out an official looking text message from the ROC government telling everyone to shelter in place due to a medical crisis. Such actions would include fake news and deep fakes inserted into Taiwanese news websites and social media to make the humanitarian crisis appear real to citizens and international observers. Specific Taiwanese government, military, and infrastructure-associated individuals considered critical to certain operations would receive large Bitcoin payments from PRC agents as “United Front work” to enable ease of access to certain systems and prepare for follow-on governance.

With the “Little Red PRCs” rapidly seizing critical government facilities, radio, and TV stations; air and seaports; and materiel depots; reports of Taiwanese unrest begin to leak. Initial reports from the international community show troops in ROC uniforms wearing Red Cross patches on their shoulders and driving around in military vehicles with Red Cross flags appearing to have the situation well in hand. These early successes inspire Taiwanese turncoats to assume positions in the new government of Taiwan to negotiate its unification treaty.

The new Taiwanese leadership acts quickly to relocate foreigners and other “black hand” elements on the island, evacuating them to their countries of origin. Better to keep out foreigners in the early days of the Taiwan seizure than give Western governments an obvious casus belli to militarily intervene. Moreover, with PRC troops posing as a humanitarian mission, Western military leaders struggle to plan military action against an opponent already embedded within Taiwanese society. Many netizens readily buy into the PRC-shaped global narrative.

With the international community struggling to leverage instruments of power (i.e., diplomatic, information, military, and economic) to respond to Chinese aggression, multinational corporations—heavily reliant on Taiwanese semiconductors—begin heavily lobbying Western political leaders to accept Chinese domination because over half of the world’s semiconductors are produced in Taiwan. PRC leadership promises to immediately begin producing and exporting cheap semiconductors to countries not sanctioning Mainland China. Foreseeing tremendous economic damage and a lack of public interest in mobilizing the military for a risky Taiwanese intervention, U.S. and international leaders acquiesce to the socially and digitally constructed reality: Taiwan is now under PRC control.