Look Out, America: China Wants Its Own Vertical Takeoff Jets 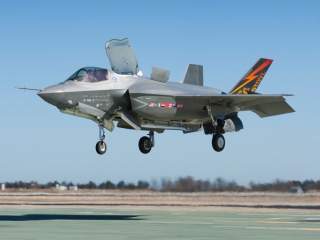 Writing in China’s premier military journal China Military Science [中国军事科学] last year, People’s Liberation Army Air Force (PLAAF) senior captain An Peng writes: “In the last few years, certain great powers have encircled and contained our country, mainly by pushing the ‘rebalance strategy’ . . .” He outlines a strategy to employ “asymmetric advantages” [不对称优势] in order to “break the enemy’s naval encirclement” [破敌海上围堵]. That’s all conventional wisdom among Chinese military officers, but he goes on to assert that “surveillance flights against us are increasing in frequency year after year.”

The article gets more interesting when he explains, “whoever seizes the aerial advantage will have an even greater strategic initiative in the naval military struggle. . .” In calling for a “mighty sea air military force” [强大的海空军事力量] An is not unique in Chinese military circles, to be sure, but for an air force captain to advocate in Beijing’s most prestigious military forum to focus on the “maritime direction” [海上方向] demonstrates an impressive unity of purpose.

In this Dragon Eye series, the issue of Beijing’s concept of “air-sea battle” has been addressed, in particular focusing on an array of new missiles (e.g. YJ-12) and land-based strike aircraft (e.g. J-16) that are already filling out China’s arsenal. This column will examine two additional aircraft that may join China’s air forces sometime after 2020, but that could impact the overall naval strategic balance. These platforms are the J-18, a prospective Vertical and/or Short Takeoff and Landing (V/STOL) aircraft, as well as a tilt-rotor transport, notionally identified as the “Blue Whale” [蓝鲸].

A few scattered reports have emerged in Western news outlets over the last couple of years regarding the J-18 V/STOL fighter, but newly available evidence lends additional weight to the theory that China has a third fourth generation fighter program (in addition to J-20 and J-31 that are well known already). The Chinese military press reported out in mid-2015 on the announcement of a contractual agreement between two major Chinese aviation industry entities to partner on the so-called “short takeoff project” [短垂项目]. There had been a Jane’s report a couple of years back that was related to an interesting Internet photo. And there may even have been some disappointment among PLA-watchers after the September military parade in Beijing, wherein the PLA declined to show off any new combat aircraft—though some Western defense media had predicted the J-18 might even be revealed. Unquestionably, there is now a surfeit of articles, both strategic and technical, concerning V/STOL aircraft now appearing in Chinese journals, such as the Journal of Propulsion Technology [推进技术].

To be sure, this tidal wave of current writing about V/STOL is, at least in part, related to the U.S. Marine Corps and its reasonably successful debut of the F-35B STOVL variant last year. However, the editor of the Chinese magazine Aerospace Knowledge [航空知识] saw fit to lead off a mid-2015 issue with some thoughts about a “Chinese STOVL” aircraft. He first discusses the Chinese aircraft carrier Liaoning’s relatively small fighter complement and suggests that future iterations will not exceed 50 fighters, but those numbers will not afford China the requisite firepower. He brings up the Falklands case, moreover, and notes that Great Britain’s force of Harriers prevailed even though the U.S. Navy allegedly predicted at the time that Royal Navy airpower was too weak. While professing no special knowledge about “whether the J-18 type [fighter] . . . exists or not,” he suggests that the urgency is high for Chinese naval aviation and the outlook bright for a Chinese STOVL fighter, concluding: “. . . perhaps in the near future, we will get some really good news. [I] hope that’s the case.”

Another report from about the same time in China Defense News [中国国防报] did not mention the J-18 by name, but appeared in this official military newspaper under the headline “How Will China Develop a Short Takeoff Fighter?” This piece makes several interesting assertions, including that China has been working on V/STOL technology since the 1960s and also that Beijing apparently acquired a Russian V/STOL Yak-141 prototype fighter to tinker with and study back in 1994. The author touts the qualities of the Russian aircraft and further suggest that China has “many times” proposed joint research and production of that fighter with Moscow. In the end, this analysis concludes that V/STOL fighters flying off of amphibious attack ships are the logical choice for any navy’s second line of defense (behind the big decks).

And what of China’s planned tilt-rotor transport? The same military publication summarized above also ran a 2015 story (by the same author) on the “Blue Whale”—along with a photo of a model from the Zhuhai airshow. The striking aspect of the design from the photo is that it has four engines (instead of two in the V-22 Osprey) mounted on two wings (instead of one on V-22). The article summarizes the expected characteristics of the Chinese design: a cruising speed of 538km per hour, a range of 3,106 km and the capability to heft 20 tons of cargo. The piece is not modest about Blue Whale’s objectives: to exceed the performance of the V-22 Osprey with an aircraft that is “lighter and more clever, simple and direct, [more] effective with lower cost, and easier to maintain. . .” [更轻巧, 简捷, 高效能, 底成本和维修方便. . .] On the other hand, a detailed article covering Osprey accidents (including one from May 2015) in the official China Air Force magazine [中国空军] injected a note of skepticism into Beijing’s pursuit of tilt-rotor aircraft by reminding Chinese aerospace analysts not to simply look at the advantages of the Osprey, but also its “defects” [缺点]

It remains to be seen if these Chinese aircraft projects will ever take wing, but the balance of probability is that they will. After all, one obvious characteristic of a cold war is the mechanistic effort to surpass the opponent in every aspect of military technology. When they do fly, Western commentators will no doubt howl that they are “just imitations” and do not represent genuine technological innovation. But that may miss the point that imitators can often be rather successful within strategic rivalries. It’s simple enough to recall that the British cleverly invented the first tanks, but it was the Germans who labored patiently on the borrowed technological concept and eventually perfected their use in battle.