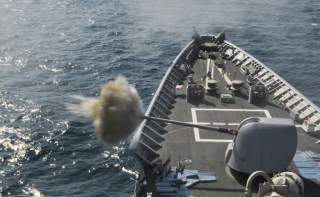 The annual SIPRI and IISS reports about military spending have recently been published, and it appears there is an emerging consensus that East Asian countries are engaged in a massive arms buildup and an increasingly volatile arms race, with war increasingly likely. For example, last year, Reuters announced that Asian defense spending had exceeded Europe’s for the first time in modern history. While true, the real cause was that European spending had declined more quickly than East Asian spending, although that headline would not have been nearly as provocative. The Financial Times recently claimed that Asian defense spending was a worrisome $332 billion—but without defining which countries were included, whether comparisons to earlier years were adjusted for inflation, and lacking any comparison to other regions.

However, these are headlines, designed to shock and awe. A closer inspection reveals that East Asian regional military expenditures are at a twenty-five year low when measured as a proportion of GDP, and are almost half of what countries spent during the Cold War. The major East Asian countries have increased their spending about 50 percent less on average than Latin American countries since 2002. The country most actively increasing its military spending is China.

Accurately measuring what countries are doing, in addition to what they are saying, will provide a clearer understanding of regional threat perceptions and help guide U.S. policy. Measuring defense expenditures and capabilities in the major East Asian countries is one direct way to assess whether or not the region has heightened threat perceptions. If expenditures are actually high, then the conventional narrative about an increasingly dangerous region is probably accurate. If military expenditures are low, then the U.S. rebalance to Asia that emphasizes new ways to create security that are not focused on the military and also burden-sharing with allies and partners is in sync with regional attitudes and critical to continued stability.

This restraint does not include China. Although China has claimed that it wishes to engage in a “peaceful rise,” China has also rapidly modernized its armed forces and become increasingly assertive. The army has been streamlined even while training and equipment have been improved. The air force has better weaponry than ever before. Most notable has been China’s quest for a blue-water navy. The PLA Navy has increased the quality of its submarines, sought improved weaponry and missile capabilities, and has been slowly creating power-projection capabilities. This improved military capability has been accompanied by more powerful and assertive declarations of Chinese sovereignty over disputed islands and more direct challenges to the Cold War status quo that existed in East Asia. The real question is not whether China is rapidly increasing its military spending, but whether other East Asian countries are responding in kind.

A successful and sustainable American grand strategy for East Asia depends critically on an accurate understanding of how East Asian states view themselves and China. Defense expenditures are perhaps the most direct indicator of a nation’s threat perceptions, and macrolevel data appears to present a puzzle of declining—or at most, marginally increasing—East Asian military expenditures.

Even measured in absolute terms, Japanese defense expenditures rose only 27 percent over twenty-five years when adjusted for inflation, and Japanese Prime Minister Abe’s proposed increases will total only 5 percent by 2018. Over a twenty-five year period (1988-2012), absolute spending in East Asia increased by an average of 148 percent, but Latin American countries averaged much greater increases of 269 percent. Again, the exception is China: since 1988, Chinese military spending has increased 834 percent in real terms.

Recent trends in defense spending may be more revealing than long-term trends, because they may reflect more current concerns. Adjusted for inflation, Japan (-0.2 percent), Taiwan (-2.6 percent), and Australia (-3.5 percent) all decreased defense spending slightly in 2013, despite headlines claiming they were engaged in military buildups. Vietnam’s increase in 2013 was only 2.4 percent and Singapore’s 2.1 percent. These regional comparisons allow us to put East Asian spending in perspective. For example, measured in inflation-adjusted constant terms, over the past twelve years (2002-2013):

A more focused view on naval deployments in Latin America and East Asia continues to tell a similar story. Venezuela, Chile, and Argentina have more naval personnel than Australia and Malaysia; Colombia, Mexico, and Brazil have more naval personnel than either Taiwan or Vietnam. Peru (six submarines) has as many submarines as any Southeast Asian country, as well as nine principal surface combatants, including one cruiser. Brazil (fourteen) and Argentina (eleven) have more principal surface combatants than any ASEAN member. The total naval personnel in Latin American navies is roughly equivalent to those in Southeast Asia, and there is no discernable pattern. It is true that Vietnam has ordered six attack submarines from Russia, which have begun to arrive. They will replace two older submarines that were built in the DPRK. In contrast, Australia is in the midst of a protracted debate about the size and type of submarine force to purchase, with no decision reached as yet.

Either Latin America is in the midst of a serious arms race, or East Asia is not. But by almost any measure, East Asia looks like Latin America in terms of military expenditures. Whether it be spending relative to the economy, increases in absolute spending, or naval personnel and deployments, it is hard to find any notable differences between the two regions. The only exception is China, where increases in military spending continue to far outpace economic growth. The real takeaway, however, is the lack of response by China’s regional neighbors. There may be a more subtle story about East Asian increases in capabilities that are different from those in Latin America—but by most common measures, it appears difficult to sustain the argument that an arms race is occurring in East Asia even though its spending is similar to Latin America’s.

Why Are Expenditures Low?

The most obvious explanation for low East Asian defense spending is a robust U.S. security umbrella. However, there is no discernible difference between allies and nonallies in their military spending. But the larger point is important: the United States’ presence is part of a diverse set of strategies for coping with geostrategic change (and potential threats) that have been at work in the region. China’s rise is not really a surprise; the real question is whether or not it is going to be peaceful. Thus, regional strategies have largely been to shape the intentions of China rather than the material-power trajectory. This was done through deliberate efforts to create economic interdependence across the region. A wealthy China embedded in regional networks of production and dependent on FDI would be more likely to be a peaceful China. If the perception is that this strategy has failed, then we may begin to see defense-spending hikes in the years to come. Japan may be beginning to head this way (even though it is tied so closely to China economically), but South Korea and Australia may be not be ready to shift gears yet. Here, the United States and its diplomatic, economic, and military presence in the region becomes critically important, and allies may be offering incentives to the United States (including military purchases) to hedge their bets. Evidence of this, however, would not be found in defense spending—at least not yet.

It should be pointed out as well that domestic politics, not threat perceptions, are often a key factor in a country’s defense budget. Just as U.S. defense budgets are greatly influenced by domestic politics, so, too, are the budgets of East Asian nations. Several East Asian countries have grown more democratic since 1988, and have thus decreased their relative level of spending on defense so as to better address the needs of their constituents. Rising defense budgets in absolute terms may be more of a reflection of increasing prosperity rather than a response to the rise of China. Several Southeast Asian nations, for example, have seen their economies grow significantly over the proposal’s time period and are beginning to translate their newfound prosperity into modernized and increased military power. In contrast, others face real domestic constraints on their defense spending that limit their ability to respond to an external threat. The Philippines, for example, clearly perceives China to be a major external threat; yet their defense budget is constrained by a constitutional mandate that increases to the defense budget be matched by increases to the education budget, thus making a dramatic increase to the defense budget a costly proposition to Manila.