Losing Egypt to Russia Isn't the Real Problem—but Collapse Is 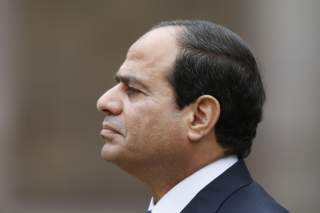 While most attention regarding U.S.-Russian competition in the Middle East is concentrated on Syria and Iran, Russian president Vladimir Putin has quietly been trying to make inroads into Egypt. For instance, a recent article by Anna Borshchevskaya presents an alarming picture in which the United States is on the verge of losing Egypt to Russia.

We have heard this argument before, usually articulated by those who oppose attaching any conditions to U.S. military assistance to Egypt. Watch out, the argument goes, Egyptian president Abdel Fattah el-Sisi no longer believes he can count on the United States due to bilateral tensions in recent years. The theory then warns that Cairo is turning to Russia, potentially depriving America of a critical regional ally.

The germ of truth in this argument is that Sisi seems to be trying to revive the tried-and-true Cold War game of playing the United States and Russia off each other. And he seems to admire Putin a good deal, as they are fellow intelligence officers and autocrats. But we have our doubts as to whether the Egyptian military establishment really is prepared to switch from Western to Russian patronage, and we also question whether Egypt is as critical a military ally to the United States as it once was.

The increased tempo of Egyptian-Russian cooperation in recent years needs to be seen in a context far broader than the U.S.-Egypt-Russia triangle. Egypt is not seeking to replace the United States, but rather to supplement it with Russian support. Furthermore, post-revolution Egypt has sought to return to a more independent foreign policy in which it plays patrons off of each other. For example, this constantly happens between Egypt and its Saudi and Emirati patrons. This was also Gamal Abdel Nasser’s original design before he openly allied with the Soviet Union following the 1956 Suez War. Egypt no more wants to be dependent on Russia than it wants to be dependent on the United States. Moreover, Sisi has sought to expand defense and commercial ties with Germany and France as avidly as with Russia.

Amidst the flurry of bilateral visits and announcements, it is also easy to overstate what Russia is offering to Egypt. Russia's loans, which Egypt must repay, are not substitutes for U.S. grant assistance, and Russia is not in the same position as the United States to facilitate Egypt’s entrée into European capitals and international financial institutions. What Egypt needs is private investment and lots of it—not what Putin can provide. Additionally, it is not easy to switch military operating systems on a dime, especially after four decades of Egypt relying on American equipment and training in all areas except for missile defense.

Also, Putin has not been as unconditionally supportive of Sisi as some would suggest, nor has Sisi welcomed all of Putin’s overtures. Putin is holding out on restoring all Russian commercial flights to Egypt, cut off since the disastrous October 2015 terrorist bombing of a Russian jet that departed from Sharm al-Shaykh. Putin recently agreed to allow flights to Cairo, but not yet to the Red Sea beach airports, which were the principal attraction for Russian tourists who used to travel to Egypt in droves. For his part, Sisi seems to be holding out on a Russian request for access to Egypt’s military airfields—perhaps because it would jeopardize his relations with the U.S. military.

But what if the U.S.-Egyptian military relationship did fall apart for whatever reason, and Sisi sought to compensate by openly allying with Russia? On the surface, this would look like another retreat of the United States from its once-dominant position in the region. But on a practical level, the impact on U.S. interests would be much less than it once would have been.

Due to years of internal erosion of the Egyptian state, it is a less capable regional actor than it was several decades ago and its military is a poor reflection of the force that acquitted itself well in 1973. The Jordanian and Emirati militaries, for example, are now far more capable of projecting power within the region and are more interoperable with U.S. forces than are the Egyptians. Excepting Libya, which is more important to European than U.S. interests, Egypt has been unwilling to deploy its forces abroad. Power in the region has shifted to the Gulf, as economic influence has become increasingly important, while other Arab and North African countries have come to eclipse Egypt in areas such as human development. And, while the Trump administration seems to believe Egypt is key to Israeli-Palestinian peace, neither Israeli prime minister Benjamin Netanyahu nor Palestinian Authority President Mahmoud Abbas is likely to move off of avowed redlines at Sisi’s request.

The Israeli-Egyptian Treaty of Peace is on firm footing and the bilateral relationship, warm at the official level and cool at the popular level, is no longer dependent on U.S. encouragement or management. Egypt would most likely continue to allow U.S. ships access to the Suez Canal, for which the U.S. Navy pays handsomely. Egypt might deny overflight and landing rights to U.S. military aircraft, but those are much less valuable than they once were as the United States continues to entrench its position in Qatar. Arab states’ more relaxed attitude towards Israel also could open up new routes for civilian and military aircraft alike. Finally, it is hard to assess the net value of Egyptian counterterrorism (CT) cooperation with Washington, but we know that Egyptian policies are in some ways making the terrorism problem worse and it is in Cairo’s interest to maintain its own CT operations, whatever the state of relations with the United States.

The real danger for the United States is not that it might lose Egypt, but that this nation of nearly one hundred million could sink into obscurity or even state failure due to poor governance, rapid population growth, and economic fragility. That would be unfortunate because a strong Egypt could serve as an important source of stability in the Middle East. But competing with Moscow for Egypt’s fealty is not going to reverse the country’s decline. Indeed, by pandering to Sisi and his misguided policies out of fear that he might turn to Russia, the United States would only be increasing the likelihood of such dark outcomes. Egypt is no longer a strategic prize for the United States or Russia to win. It is a challenge to be managed through careful, and where necessary coercive, diplomacy.

Andrew Miller is the deputy director for policy at the Project on Middle East Democracy (POMED) and is a nonresident scholar at the Carnegie Endowment for International Peace. He previously worked at the Department of State and as the director for Egypt and Israeli Military Issues at the National Security Council from 2014–2017.

Michele Dunne directs the Middle East Program at the Carnegie Endowment for International Peace in Washington, DC. A former State Department officer who served at the U.S. Embassy in Cairo and the National Security Council, among other assignments, she has also taught at Georgetown University and headed the Rafik Hariri Center for the Middle East at the Atlantic Council.