Is Lukashenka Signing Away Belarus's Sovereignty? 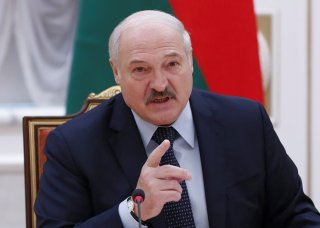 Last week, Russia showcased its latest innovations in military technology at the International Army Games in Moscow to a global audience. In addition to presenting new armed vehicles, weapons systems, and military aircraft, Russia treated the world to an eccentric performance: ballerinas in the arms of black-clad members of Belarussian tank crews danced to Swan Lake atop tanks emblazoned with the flag of Belarus.

This is just the latest signal emitted by Moscow, affirming the Kremlin’s military and security ties to Belarus, and one that foreshadows the looming assimilation of the two countries. On September 9 Belarussian president Alyaxandr Lukashenka will meet with his Russian counterpart Vladimir Putin to ink a long-in-the-making package of “roadmaps” for Belarussian-Russian integration. These twenty-eight roadmaps are intended to further harmonize trade, taxation, and other policies between the two countries.

Plans for such integration have been on the table intermittently since 1999, when Belarus and Russia formed a Union State in which they are each separate countries, but attempt to cooperate somewhat on policy, not entirely unlike the EU. But fears that Russia will attempt to subsume Belarus into the territory of the Russian Federation have persisted and on several occasions elicited protests from Belarussians.

For his part, Lukashenka has vehemently attempted to refute arguments that the formalization of these roadmaps will tie Belarus’s hands. “There is no talk of losing sovereignty,” he said in relation to the upcoming meeting, “Today we are so educated and intelligent that, without losing the sovereignty of either Russia or Belarus, we can build such relations that are not present in either federal or unitary states." However, the timing of the meeting, which will occur one day before the Zapad 2021 military exercises in which 12,800 troops, 2,500 of them Russian, will be active on Belarussian territory, gives the impression of a concession extracted at gunpoint.

Over the past year, Lukashenka has repeatedly given in on measures that he had previously resisted. While the roadmaps were drafted in 2019, negotiations over their contents came to a standstill due to disagreements between Putin and Lukashenka over energy prices and taxation. In April 2020 Lukashenka announced that Minsk would be willing to resume negotiations only if Russia is ready to abandon its “imperialist ways.” Since then, Lukashenka, who has previously earned Russia’s ire for skillfully pivoting West in order to increase Belarus’s leverage vis-a-vis Moscow, appears to have painted himself into a corner. His most recent electoral victory in August of 2020 has been labeled fraudulent by the Belarussian opposition, led by Sviatlana Tsikhanouskaya. The opposition has persisted in protesting his rule despite a brutal police crackdown that has seen tens of thousands of Belarussian citizens jailed, beaten, or forced to flee.

Consequently, several Western countries have imposed sanctions on Belarus, leaving Lukashenka almost entirely dependent on Russia for the financial and security support that keeps him in power. Minsk is indebted to Russia to the tune of $8 billion. After the fallout from the hijacking of a Vilnius-bound Ryanair flight, Belarus’s main commercial airline, Belavia, was able to remain solvent thanks to a Russian bailout, in exchange for which it agreed to offer flights to Crimea, effectively recognizing the territory as Russian and further alienating it from the West. With few other partners to turn to, Lukashenka’s leverage has been gradually whittled down. He has long resisted Russia’s push to transport Belarussian fertilizer through Russian ports, preferring instead to take the cheaper and easier option of exporting them via Latvia and Lithuania. But thanks in part to Western sanctions, in March Lukashenka caved to Putin’s demands. Although Russia subsidizes Belarus heavily, mainly through loans and steep discounts on energy, it’s unlikely that Moscow will fully compensate Minsk for the expenses incurred.

Lukashenka’s adamant resistance to the opening of a Russian airbase on Belarussian territory will likewise soon be overridden by his weakened financial and political position vis-a-vis Moscow. On August 20 he not only renewed arrangements allowing Russian use of existing Belarusian airbases, but when asked about the prospects for a new Russian airbase said, “if necessary, there will be not just a base, but all the armed forces” of Russia. Lukashenka has refused calls for a Russian airbase since 2013, insisting that such a base isn’t necessary. Russia clearly does not see it this way.

Russia clearly feels that a robust military presence in Belarus is crucial to its national security interests. 2021 has seen a  record number of military exercises and war games conducted by Russia in 2021, which will culminate September 10-16 with the Zapad 2021 exercises. This uptick in military activity along Russia’s western borders reflects Moscow’s discomfort at increased NATO activity in what Moscow considers to be its near abroad. Michael Kofman, a senior research scientist at the CNA Corporation, has suggested that Russia is more or less trying to mirror NATO’s activities as part of its Enhanced Forward Presence in Poland and the Baltic States. Russian Minister of Defense Sergey Shoigu stated that these drills are purely defensive in nature and not directed at any particular country. But the signature of several cooperation agreements and the steady rotation of troops means that Russia will have a de facto permanent military presence in Belarus.

Some analysts have pointed to the Russian militarization of Belarus as evidence that Putin has succeeded in completely subverting Lukashenka, who has been a thorn in his side for decades, and indeed it appears that Lukashenka is almost entirely out of leverage. But Lukashenka’s reputation as a master gamer didn’t come out of thin air. Belarussian political scientist Dmitry Bolkunets has observed that the adoption of these road maps could be an important success for Russian leaders to tout in the run-up to the State Duma elections later this month, but they also hold serious risks: “Russia is underestimating Lukashenka and making a mistake because there are big risks in relation to how he will comply.”

Lillian Posner is the assistant managing editor of the National Interest.