Macedonia: Naming a Country Is Harder Than It Looks 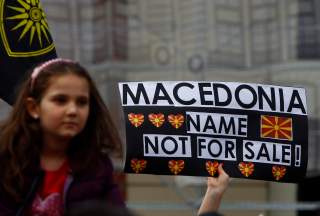 The interstate dispute between Greece and the Former Yugoslav Republic of Macedonia (FYROM) has lasted for twenty-seven years, and only recently have officials from the two countries expressed their readiness to achieve the historic compromise towards new name for this small Balkan country. Its accession to NATO and the European Union has been blocked by Greece for years, which strengthened the pro-Russian sentiment in the country itself.

The new Prime Minister of FYROM, Zoran Zaev, suggested that his country is ready to agree on a name with a geographical indication, and announced a national referendum on this issue. However, it is uncertain what the result of this referendum would be. At the same time, Greek Prime Minister Alexis Tsipras has diplomatically announced that the existence of a compound name with geographical or with time designation would not be completely irrational. However, the Greek public sharply rejects the idea that the name “Macedonia” in any combination exists as a part of the name of any country. This is supported by mass demonstrations in Thessaloniki, where over 100,000 people stood behind the slogan: “There is only one Macedonia, and it is in Greece.”

In that sense, I would refer to five proposals for the new state name of FYROM, which the two sides are currently negotiating under the supervision of UN Special Representative Matthew Nimetz. The least acceptable solution for Skopje is “New Macedonia,” because it is insufficiently determined, according to Prime Minister Zaev. On the other hand, the name “Republic of Macedonia (Skopje),” which contains in the brackets the name of the capital of FYROM, is the least acceptable for the Greek side because it monopolizes the name “Macedonia” and is closest to the constitutional name “Republic of Macedonia,” on which official Skopje insisted earlier.

The next proposal for the name is “Northern Macedonia,” which is controversial in multiple ways. Examples of parallel countries, regions or partially recognized states with such geographical designation are present in Europe, from Northern Ireland to Northern Cyprus. But we should just look at the case of Sudan and South Sudan, which continue to tackle territorial disputes in the Abyei region and the city of Heglig. Although the background of this case is different from the Greek-FYROM dispute, we can rightly say that such a geographical determinant can not solve some new irredentist and nationalist claims in the future. At the same time, the name Northern Macedonia implies that there is a South Macedonia (although there is not even a region with that name). The existence of Northern Macedonia would further open the question of the existence of the so-called Western Macedonia, which is synonymous for Albanian secessionism in FYROM.

Furthermore, the proposal '”Upper Macedonia”' evokes the examples of Styria, Silesia or Normandy, thus additionally debasing the statehood of FYROM while, again, suggesting the existence of the “two” Macedonias. It should not be forgotten that within the borders of Bulgaria there is a geographical region named “'Pirin Macedonia,” which someone could call “Eastern Macedonia” as needed? This fact additionally delegitimates the fifth proposal: “Vardar Macedonia.” Firstly, the name suggests the existence of at least three Macedonias, as in Greece there is also the '”Aegean Macedonia'” and, moreover, this very geographical determinant of '”Vardar”' Macedonia covers some parts of present-day Serbia, Kosovo and Bulgaria.

All of these proposals are at least confusing, vague, inconclusive and controversial, and we have to deal with them carefully, especially if we take into account the thesis of the famous Serbian historian Slobodan Jovanović that “nationalism is the only tradition in the Balkans.” In that sense, I dare to say that the most appropriate solution for the new name of FYROM would be: Republika Makedonska (or only: Makedonska). The international name of the state would retain the Slavic transcription: Republic of Makedonska, emphasizing the Slavic semantics and phonetics in both the original and in the international transcription.

We have a comparable example of avoiding international transcription in the case of Republika Srpska. This entity of Bosnia and Herzegovina cannot be compared to FYROM in terms of their emergence and legal status, and the international transcription is avoided in this case so that its statehood can not be implied, due to the term Republika; the literal translation would be “Serb Republic,” which is an unacceptable international name for an entity within sovereign country. In the case of the Republika Makedonska, however, whose literal translation would similarly mean “Macedonian Republic,” international transcription is avoided in order to prevent the creation of an exclusive link with the term “Macedonia,” but its statehood is in no way questioned. Slavic transcription would also be used when it comes to the name of the language and people of the Republic of Makedonska (Makedonski language; Makedonska nation). Albanians of FYROM, of course, would have the right to use all these terms in their native language.

It is important to say that this solution would not deny anybody's right in FYROM to continue to call their country colloquially “Macedonia.” If the British prime minister can cry “Britain”' instead of United Kingdom, or if the U.S. president can say “America”' instead of the United States, why could not that be done, in a similar way, by an ordinary citizens of Makedonska?

I am deeply convinced that this solution will avoid future misunderstandings between the two countries, and provide a brighter prospect in this gloomy political moment. At the very least I believe Makedonska deserves a chance.

Nikola Zečević is a Teaching Fellow at the University of Donja Gorica in Podgorica, Montenegro. He is currently visiting researcher at the Charles University, Department of South Slavonic and Balkan Studies in Prague, Czech Republic.

Image: A woman holds banner reading "Macedonia name not for sale" during a protest organized by the "We are Macedonia" movement as they rally against the name change demanded by Greece, in Skopje, Macedonia March 4,2018. REUTERS/Ognen Teofilovski