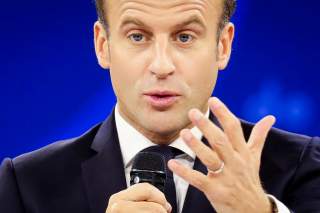 French president Emmanuel Macron said last week that “we are experiencing the brain death of NATO,” calling for the development of a “true, European army.” And he has been backing his words with action. On Tuesday, European Union ministers proceeded with thirteen defense projects under the Permanent Structured Cooperation initiative, with France taking the lead on ten of them. The irony is that the idea of a European army, which dates back to the immediate postwar years, may have come to fruition were it not for France and its president, Charles de Gaulle.

In the years following World War II, a robust debate ensued over the question of German rearmament: would Germany ever again be allowed to build up a military? Plenty of domestic and international sentiment was against it. Kurt Schumacher, leader of the Social Democratic Party of Germany and leader of the opposition in the Bundestag, decried rearmament for fear that it would preclude German unification. Nor were European states ready to see a rearmed Germany so soon after the war. Even John J. McCloy, appointed as the Allied High Commissioner for Germany in September 1949 to supervise Germany’s economic, military, and foreign policy matters, agreed with this sentiment.

Then, on June 25, 1950, North Korean troops stormed the 38th parallel, marking the start of the Korean War and spreading the fear of a communist takeover across Europe. Ultimately, McCloy’s goal was to create a Western-aligned democratic state in West Germany. As such, he realized that to make the state viable, it would need to be able to defend itself and that at some point, it would have to rearm.

Knowing that countries were still reluctant to allow this possibility, McCloy proposed the idea of a European Defense Force (EDF). Each country would contribute divisions to the EDF, to be overseen by a supreme commander and integrated chain of command. Since the EDF would have equal French, British, and German units and German power would be subordinated in a supranational structure, McCloy thought it easier to sell politically. The French, however, balked at the idea of German units, fearing a resurgent Germany.

French diplomat Jean Monnet—now recognized as a founding father of the European Union—then worked behind the scenes to address the concerns, forming the Pleven Plan. Troops were to be organized in smaller contingents and all troops were to be overseen by their national governments, except for Germany’s (to be overseen by the supranational organization). But even this proved to be insufficient to resolve the impasse. After years of negotiation, the proposal came before the French parliament for ratification in 1954. President de Gaulle worried that a European army threatened French sovereignty and constitutional integrity and could bring back a militarized Germany. So, the proposal never passed in Parliament. And considering that Stalin had recently died, the Korean War had ended, and West Germany would ascend to NATO in 1955, a European army never came to be, its proposed responsibilities today divided among NATO and the European Union.

Ultimately, France’s actions today are in line with the Gaullist policies of its past. President de Gaulle had wanted a Directorate of Three (the United States, the United Kingdom, and France) to dictate Western security. Unlike the 1950s, in which precluding a rearmed Germany could lead to this arrangement, President Macron is trying to unify a Europe—now with a rearmed Germany and especially one with Brexit-focused Britain—under his country’s leadership to form this arrangement. To do so, he is proposing to create a supranational army that his Gaullist predecessors once rejected, an army that is to render obsolete the transatlantic alliance that made it redundant. What an irony.

Andy Law a public policy analyst based in Washington, DC and also writes for magazines such as The Diplomat.