Macron Prepares to March France Into the Future (With Recycled Policies) 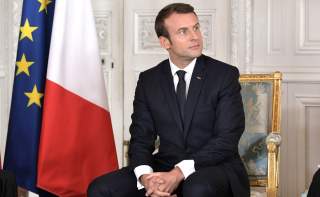 On Sunday, French voters headed to the polls to vote in the first round of the parliamentary elections. A month after the election of its new president Emmanuel Macron, succeeding the socialist François Hollande, the country chose to grant the new executive the necessary seats in the National Assembly in order to enact legislation. Macron’s independent political party En Marche! received 32.5 percent of the vote. Meanwhile, a considerable amount of members of parliament from the establishment Socialist Party and Republican Party have already struck deals with Macron’s movement in order to see themselves unopposed in their electoral district. As a result, many “opposition” parliamentarians will also support the government of the newly appointed Prime Minister Edouard Philippe.

The center-right Republican Party has received 20 percent of the vote and is likely to be the largest opposition party in parliament, while the Socialist Party, which had governed France for the last five years, only got 9 percent.

Most extraordinary is the participation rate of 49 percent, which is the lowest in the history of the French Republic.

The election night was particularly bitter for Marine Le Pen, whose National Front, the third largest party, got 13 percent of the vote. Now, the National Front’s chances of success in next week’s second round are dim. Only a few of Le Pen’s nationalist candidates are expected to win in the runoff next Sunday. The National Front, contrary to its expectations, has failed to considerably increase its share of votes. This is mostly due to infighting following Le Pen’s election loss against Macron. Her party leadership has been ideologically divided, and one key player—her niece Marion Maréchal-Le Pen, who had been one of the party’s two members of parliament until now—has left the movement completely.

This result provides Macron with the comfortable majority that he wanted. In fact, only a few days ago the new president had expressed his fear of “ending up with too many [members of parliament],” leading French commentators to mock his political party for its inexperienced candidates, many having never held elected office in their lives. And indeed, Macron’s En Marche! is expected to get an absolute majority—between 415 and 450 seats. There are 577 seats and only 289 are needed for a majority.

Regardless of these eventual problems, Macron sees himself confirmed once again. He is now embodying the so-called “Republican Front.”

Inspired by the name of Le Pen’s National Front, the Republican Front gathers those who reject the rampant nationalist positions of the French far right, which they consider contrary to the “Republican spirit.” While not an established party in itself, the Republican Front represents a coalition of different parties in the République against a particularly unpopular candidate like Marine Le Pen.

Macron was, in fact, fortunate to run against Le Pen in the presidential election because the major policy differences enabled him to stand out as the candidate for a “tolerant and open” France. The excitement for this new and young president, upon close analysis of his political manifesto, inevitably falls short. As a former economic advisor to the wildly unpopular François Hollande, Macron has been inside the political bubble in Paris for quite a while. In fact, he also served as minister of the economy under Hollande’s socialist government. For his presidential run, his manifesto is therefore, to no surprise, very similar to that of the last government.

One of the ways that Macron wanted to stand out was through his love for the European Union. Before his victory speech at the Louvre in Paris, Macron walked onstage to Beethoven’s “Ode to Joy.” In an interview with French newspaper Libération, Macron said, “You cannot be timidly European,” and called for fiscal harmonization in the EU. Macron’s radical pro-EU stance is expected to further divide the country given that an increasing number of French people growing skeptical of the European Union.

Additionally, France’s new president wants to collectivize military forces and surveillance programs. For instance, he wants to create an EU biometric identification card for all citizens. For the Eurozone, the body organizing the policy of the European common currency, Macron calls for a minister of finance and a completely new parliament, which would increase bureaucracy.

Other questionable stances of Macron include the introduction of a “Buy European Act,” which would limit private-public partnerships to companies willing locate at least 50 percent of production to Europe. That type of limitation would foster EU-protectionism. It is a stance that is even more paradoxical, given the readiness of European leaders to oppose Donald Trump for protectionism. Macron also wants to further intervene in the agricultural sector and on the housing market, intends on introducing a permanent state of emergency (effectively reducing civil rights) and favors military interventionism in Syria with a UN mandate.

The parliamentary vote on Sunday has given Emmanuel Macron the first confirmation in his policies, which he will try to implement after receiving a large majority. He has crushed party establishments on both sides yet recycled the same old and ineffective policies of the past, and as of now the French public seems oblivious to this massive rebranding effort.

Beware the day that the public discovers that it attributed one of its biggest mandates in France’s history to the person who will effectively do the exact same thing as the last person.

Bill Wirtz is a law student living in France. His articles have been published in the American Conservative, Newsweek, Rare Politics and the Washington Examiner.

Image: Emmanuel Macron with Vladimir Putin in May 2017. Kremlin.ru