Macron: Still the Answer for France? 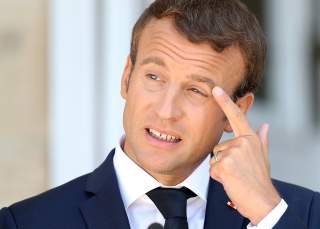 From the west side of the Atlantic, France may appear to be experiencing a time of political calm. While President Donald Trump feeds news outlets a constant stream of staffing changes and political crises, President Emmanuel Macron offers relatively infrequent opportunities for breaking news. Stories on Macron rarely examine the inner workings of his administration, instead often highlighting flashy PR moments, like when he impersonates James Bond or welcomes celebrities like Rihanna to Paris. However, this disparity in news coverage is deceiving. Although France lacks the conspicuous chaos that characterizes the White House, cracks in Macron’s shiny political exterior could be beginning to emerge. His short time in office has been characterized by public disagreements with his officials and popular backlash to his proposed policies, leaving Macron doubling down on his cabinet to salvage his public image and preserve his vision of the presidency. Macron entered office with a vision for a “Jupiterian” presidency, which exists above petty political squabbles, but it seems he has grossly underestimated the inherently conflictual nature of democracy.

For a man who was described as having “the stuff of presidents,” Macron’s meteoric rise to power seems like a natural progression in a lifetime of achievement. A former investment banker, Macron had a brief stint in politics under his predecessor, François Hollande, before his self-made political party, La République En Marche (LREM), brought him to the pinnacle of democratic politics—the presidency. He entered office with a healthy dose of narcissism fostered by years of prodigal success, and his perception of the French presidency reflects this. Macron balked at Hollande’s humble aspiration to be a “normal president.” His perceived notion of the way Hollande handled his time in office is inadequate for his own vision for the contemporary French presidency: a position meant to provide stability and leadership vis-à-vis reinvigorated democratic authority.

To fulfill this role, Macron aspires to be a “Jupiterian” president, acting as a “remote, dignified figure” leading the state. As befits the Roman king of gods, this vision of leadership is characterized by strong, centralized power and a polished public image. Displaying a strong affinity for micromanagement, Macron exercises tight control over media appearances and presidential communications. If he is not speaking through the official government spokesperson, Christophe Castaner, he interacts with the press through carefully choreographed appearances and targeted speeches while reserving the right to remain silent. Macron notably declined to host a traditional Bastille Day news conference because his “complex thought process” would be too much for journalistic questioning. His desire for meticulous control of media content also extends to his ministers, who make rare public statements which are subject to Macron’s pre-approval.

Despite his best efforts, Macron’s administration has been dragged into the political fray. Just a few months into his presidency, Macron had a very public dispute with the French Army’s chief of staff, General Pierre de Villiers, over proposed defense budget cuts. De Villiers resigned after the spat, stating the diminished budget would not allow him “to guarantee the protection of France and the French people.” Not one to tolerate insubordination, Macron responded with a clear message: “I am your boss.” While Macron decried the indignity of this public budget dispute, the French media was less charitable to his reaction. One newspaper characterized his response as a “little authoritarian fit” which displayed his immaturity.

Discontent with Macron’s proposals extend far beyond the Élysée. During his campaign, Macron committed to cut public spending by about $71 billion (€60 billion) over five years to keep France within the EU’s deficit limit. His ministers and local government officials are unlikely to thank him for their diminished budgets and strained resources. Macron also hopes to reform the labor code, le Code du Travail, a move that will enrage France’s notoriously strike-prone labor unions. Even Macron’s desire to elevate his wife, Brigitte Macron, to an official “first lady” position was immediately met by a popular petition that stopped the initiative in its tracks.

These blunders dragged Macron’s presidency back down to Earth and the public has not been merciful. Although elected with 66 percent of the vote in May, an Ifop poll released in August shows Macron’s approval rating dropped to 40 percent, a staggering drop over three months, while his disapproval rating has risen to 57 percent, up from 43 percent in July.

In the face of this momentous drop in popularity, Macron is struggling to regain traction and has threatened a cabinet shake-up if his ministers don’t deliver. At a low-profile meeting with his cabinet in July, Macron reportedly warned that his ministers will have “disappeared” in six months if they hide behind the documents produced by their offices. His critiques reveal the burgeoning chaos that one former Hollande aide says characterizes all levels of the Macron government. Apparently, Macron’s penchant for centralizing responsibilities has left him vulnerable to the very political turmoil he had hoped to avoid.

Faced with plummeting approval ratings and a growing list of critics, Macron’s young Jupiterian presidency has descended into the earthly conflict of democratic politics. Containing turmoil within the government and recovering popularity while achieving meaningful political victories may prove to be a Sisyphean task. Now, the world must watch to see if this French Jupiter can rescale Mount Olympus or if he will simply fade into myth. If Macron expects to push through his economic and foreign policy agendas while retaining popular support, it would be wise for him to break his silence and bridge the chasm he has created with the public. The French people want an effective leader, not an aloof ruler.

Jessica Kolbe is a researcher in the Transatlantic Security Program at the Center for a New American Security (CNAS).