Macron Wins France's First "Who Wants to Be President?" Debate 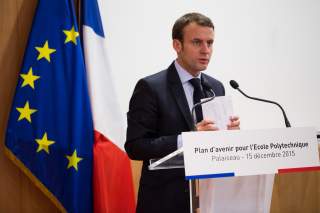 It might have been that France’s sole presidential debate was won by the far left. Jean-Luc Mélenchon, an ultra-socialist member of European parliament, wants to scrap the Fifth Republic and rewrite France’s constitution to enshrine new rights, like abortion access and assisted suicide. Sexagenarian yet scrappy—Bernie Sanders is his American counterpart—he was probably the most eloquent of the debaters on Monday night’s dais. His success was unexpected, given how thoroughly the fumbling presidency of François Hollande has eclipsed the French left as of late.

But the real victor was Emmanuel Macron, the upstart neophyte and former investment banker, running as the pro-European and pro-migration antithesis of populist spitfire Marine Le Pen. Monday’s debate, a grueling three-hour-plus exchange that appeared to air from a repurposed Who Wants to Be a Millionaire? studio, was a chance for Macron and Le Pen, the two mavericks presently shaking up French politics, to at last confront each other. They were joined by the major-party candidates they’ve sidelined in the polls, François Fillon for the center-right Les Républicains and Benoît Hamon for the left-wing Parti Socialiste, along with Mélenchon.

The parallels between Le Pen and Donald Trump were striking from the start, with the former underscoring her commitment to “national sovereignty” and “territorial integrity,” and selecting a familiar punching bag: “I don’t want to be the vice chancellor of Madame Merkel.” It was French carnage wrought by bad hombres, with Le Pen deploring teachers who “go to school afraid of what’s going to happen,” women “forced to wear the veil because we’ve allowed the Islamic fundamentalists to take over” and poverty worse than when Marie Antoinette was beheaded. The National Front leader was aggressive, sniping, feisty and missed no opportunity to juxtapose herself with the monochromatic suits arrayed against her.

She was most in her element on the issue of immigration, saying that France has “nothing to offer” migrants due to its already alarming unemployment and poverty rates. Macron is generally supportive of immigration—he has defended refugees as presenting an “economic opportunity”—but onstage he was more equivocal, saying France needed “a real policy for expelling illegals, people who are undocumented” while also supporting shorter wait times for asylum seekers. Fillon was quick to remind viewers that Macron had been a Merkel booster; he advocated government-enforced migration quotas. Hamon, meanwhile, prattled on about “climate refugees.”

It was over the burkini, of all things, that the friction between Macron and Le Pen at last yielded a spark. Le Pen wants to ban the popular Muslim swimwear and Macron does not, a point she made abundantly clear and which set off Macron. “I don’t need the talent of a ventriloquist,” he said. “My views on the burqini have nothing to do with secularism. It has to do with public order.” Le Pen, he said with heightening animation, wanted to make Muslims “the enemy of the republic.” “I hear people talking about liberty,” Le Pen countered, “and I think we have to have a thought for these young women who can’t dress the way they want to.”

This was a debate shadowed by cracking shibboleths, religious liberty and mass migration and even the continued existence of the Fifth Republic itself. Implicit was an acknowledgement that France, roiled last year by everything from terrorist attacks to soccer riots, cannot continue on its current trajectory, that a mighty heave on the ship wheel is long overdue. For Le Pen, that means replacing the current political class with one that rejects multiculturalism; for Macron, it means ventilating France’s torpid and state-strangled economy; for Mélenchon, it means a Sixth Republic. It’s a curious Overton window, at least to American eyes, one that opaques social issues like abortion, still unsettled in our national dialogue, while admitting seismic changes to the constitution that our lawmakers would never dare suggest, at least not out loud.

The only candidate who didn’t come off as a radical on Monday was the guy looking to ax half a million civil servants, François Fillon. A former prime minister, he presented himself as the adult in the room, ducking the repeated barbs from Le Pen, who needs to poach his conservative voters, and dodging the avalanches of crosstalk that submerged the other candidates later in the debate. Early on, he swatted down a Le Pen proposal to hire police, patiently explaining that France was too indebted to spend more on civil servants and recommending instead that officers be reassigned from administrative work. This is how American fiscal conservatives wish Ted Cruz would be: less unctuous, less opportunistic, more statesmanlike and polished.

Alas, Fillon is currently hemorrhaging in the polls thanks to a scandal in which he placed his family members in government sinecures. An Elabe survey that asked viewers who had won the debate showed his Thatcherite elder approach hadn’t concealed the stain, placing him in a tie with Le Pen for third place. Mélenchon came in second, seizing with finality the left-wing standard from Hamon who ranked last. It was Macron who took the gold medal, having assured quizzical French voters that he could play ball with the political veterans and chart the centrist (and perhaps illusory) strait that many of them seek. With Geert Wilders prepping for opposition in the Netherlands, with Macron emerging undented in France, with even Fillon trashing Le Pen’s plan to ditch the euro, European elites have to think they have the populists cornered, at least for now.