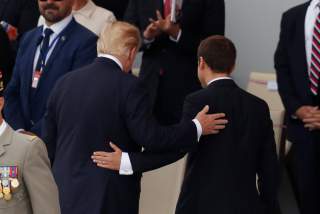 As President Donald Trump prepares to welcome his French counterpart, Emmanuel Macron, for the first ever state visit of his presidency, Paris and Washington are closer now than they have been since the early days of the Iraq War.

However, with imminent decisions on several issues—ranging from Syria and the Iran nuclear deal to trade tariffs— on the horizon, the Macron-Trump “bromance” may not last much longer. Despite a shared love of pageantry and pomp, there is a real question if Macron will be able to leverage his personal chemistry with Trump and the close relationship between the two countries’ diplomatic corps and defense establishments to deliver tangible results for France and its partners in Europe.

Of the leaders of the West’s great powers, only Macron seems to have cracked the code on captivating Trump. Macron’s enthusiastic persona and his image as a “winner”—having been elected with a 66 percent majority, followed by a landslide victory in parliamentary elections giving him full constitutional powers—has charmed and impressed Donald Trump.

Furthermore, the recovering French economy and Macron’s domestic reform efforts have also not gone unnoticed in the White House. Trump and Macron also share many similar views when it comes to how to address economic challenges posed by the rise of China.

Meanwhile, the European Union’s other major leader—Angela Merkel—has struggled to engage effectively with Trump. Merkel who enjoyed a very close relationship with Obama was viewed with suspicion by Trump from the beginning. Merkel’s difficulties with forming a coalition government has weakened her international standing. That, along with open disagreements with Trump over Germany’s defense spending and trade surplus, have caused the two leaders to go an unprecedented five months without talking to each other. Merkel is slated to arrive in Washington to meet Trump just a few days after Macron, only their meeting is expected to be more subdued.

The most important reason for the closer Franco-American working relationship, however, is hard power. The United States remains the world’s top military spender, but France—a P5 member and soon-to-be-only nuclear power in the EU—has become the EU’s sold credible security partner in the eyes of both the Obama and Trump administrations.

President Trump spent much of his campaign criticizing NATO, so he is pleased that France’s defense spending is close to NATO’s 2 percent spending target, which Macron has committed to reaching by 2025. France’s military has also deployed forces in Iraq and Syria and has worked closely with Washington on counterterrorism and in Mali. France’s current foreign minister, Jean-Yves Le Drian, formerly the defense minister, enjoys a stellar reputation among Washington’s security establishment.

All of this leaves Macron uniquely positioned to convey French and European concerns to the White House. But in doing so he also has the unenviable task of attempting to bridge the gap that has been growing across the Atlantic since Trump’s election. Cozying up to Trump—who enjoys dismal popularity figures in Europe—will not be tolerated for long unless it brings concrete results.

So what does Macron need to get something out of this relationship? Staking out a common stance on Syria’s Assad regime is a top priority. No doubt Macron will take a strong view on this issue, and will try to convince Trump to keep forces from Syria. France has a particular interest here since it continues to face ISIS attacks at home. Beyond the recent Franco-British-American strikes in retaliation against Assad’s use of chemical weapons, the United States and France must also work together on drawing up a plan for post–ISIS Syria that should include political transition. Trump has signaled unwillingness to commit to a broad stabilization and reconstruction agenda so France could offer to take the lead together with European and Gulf partners to shoulder the financial burden, particularly since they have a clear stake in preventing another migration crisis.

The most pressing task for Macron is the Iran nuclear deal. None of the E3 states (France, Britain, Germany) want to withdraw from the Iran deal, but Trump needs to decide by May 12 if he will re-impose new sanctions against Iran. Trump and his new advisors, John Bolton and Mike Pompeo, seem bent on withdrawing, and Macron is the most likely world leader to salvage the deal—or at least buy some more time. Among the E3, France has been the most willing to push for a tougher framework aimed at satisfying Trump’s demands on Iran’s ballistic missile program and its destabilizing role in the region, while seeking to preserve the agreement. France’s firm stance on Iran and its hard-power edge lends Macron credibility vis-à-vis Trump on this delicate issue.

On trade, Macron’s influence over Trump is more uncertain. President Trump has been consistent on very few issues, but he is a lifelong skeptic of free trade. The decision to impose unilateral tariffs on steel and aluminum imports threatens to levy heavy losses on European countries. The absence of a deep U.S.-French trade spat provides an opportunity for Macron to seek to preserve and expand the temporary exemptions from the U.S. tariff policy through pushing for new U.S.-EU trade agreement. But this will require Macron to drop the French insistence that the EU should only sign trade agreements with countries that respect the Paris climate agreement. He should also engage Trump in a conversation about cooperation against China’s unfair trade practices, which are raising concerns on both sides of the Atlantic.

Finally, the least hopeful point of debate is over climate change. It is unlikely that Trump will budge on the Paris climate agreement, which he withdrew from last June. While Trump has sought to weaken environmental protection at home, Macron has defiantly recommitted France to the Paris agreement and encouraged climate scientists to move to France with his “Make Our Planet Great Again” initiative. The divisions over climate change also highlight the fundamental ideological differences between the two presidents and their respective political bases. They may enjoy one another’s company, but Macron and Trump will never see eye to eye on climate-change policy.

The first official state visit by a foreign head of state to a “new” White House usually offers cause for hope. On a personal level, the two leaders’ unique relationship, along with Trump’s transactional style, certainly gives Macron an opportunity to engage. On some issues—such as Syria, counterterrorism, and trade—there may be limited room for dealmaking and forging common understanding. But, should Macron fail to bring back tangible results from his trip to Washington, his rapprochement with the American president will increasingly be called into question. While the unique Trump-Macron “bromance” may soon be coming to an end, the Franco-American security partnership will doubtlessly continue.

Erik Brattberg is director of the Europe Program and a fellow at the Carnegie Endowment for International Peace in Washington.

Philippe Le Corre is a senior fellow with the Harvard Kennedy School’s Mossavar-Rahmani Center on Business and Government as well as a fellow with Harvard’s Belfer Center for Science and International Affairs. He is also a nonresident senior fellow in the Europe and Asia Programs at the Carnegie Endowment for International Peace.