Maduro's Oppression Keeps Him in Power 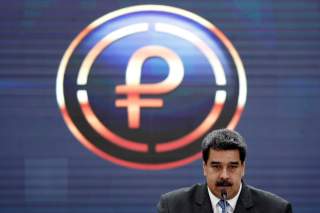 Since his inauguration in 2014, the Venezuelan president’s practice of jailing of citizens opposed to his regime has metamorphosed from simply “rounding up the usual suspects” into a broad government crackdown that has arrested citizens en masse without any apparent rhyme or reason. There is a method to Maduro’s madness, however. While millions of Venezuelans have fled their homeland to avoid the country’s unfolding economic collapse, more than a few have done so because they fear political persecution. And that’s precisely what Maduro intends.

Maduro’s predecessor, the late Hugo Chavez, was far less aggressive in his use of imprisonment as a tool of repression. Perhaps Chavez was more concerned with his international image and status. Maduro, on the other hand, made it clear from the outset that jailing citizens would be part of his domestic policy, and he has done so remorselessly.

I recently interviewed Alfredo Romero, the founder of Foro Penal, a Venezuelan human-rights organization which provides pro bono legal assistance to political prisoners. He told me that there were fewer than twenty political prisoners in jail at the time of Chavez’s death in 2013. By the end of 2014, however, Maduro had imprisoned three hundred citizens accused of political crimes, and detained over three thousand. In a further departure from his predecessor’s policies, Maduro also sanctioned the arrest of women and the torture of political prisoners.

Maduro’s penchant for repression has a great deal to do with his rickety political status. From the beginning, Maduro was an unpopular, undeserving heir to Chavez’s oversized, almost mythic, leftist legacy. To be sure, Maduro attempted to channel the late cocalero, going so far as to claim that Chavez came to him in the form of a little bird who sat on his shoulder and tweeted sage advice. But Venezuelans weren’t buying it. In early 2014, even before today’s economic crisis, activists organized mass protests against Maduro’s regime. The protests drew international attention in large part because of Leopoldo Lopez, a popular and charismatic opposition leader. But Maduro moved swiftly against them with scores of protesters were killed by police and Lopez thrown in jail (he was released last year, but remains under house arrest).

That crackdown set the stage for the unrest to follow. Last year, following a new wave of protests driven by deteriorating economic conditions, more than five thousand citizens were detained by Venezuelan authorities. Hundreds of thousands of others have fled the country to date.

Maduro has made no apologies for this outcome. After all, the broad-based repression and privation now endemic to Venezuelan society has proven an effective method of societal control. Those who remain in Venezuela are either sick and starving, or simply too politically intimidated to rise up. Meanwhile, by allowing others to leave in droves, Maduro has effectively outsourced their care to neighboring countries—at no cost to either him or his regime.

The formula has proven to be brutally effective. So far in 2018, there have been no political protests in Venezuela—a chilling indicator of Maduro’s increasingly successful campaign of political repression.

This does not mean that Maduro is unconcerned with public opinion. According to Romero, the Venezuelan president is deeply cognizant of statistics cited by international observers—and works diligently to shape the optics surrounding his ongoing campaign of domestic repression. This includes the use of a “revolving door” policy in which the recorded number of political prisoners is kept artificially low by cycling them in and out of jail on a monthly basis.

Today, the world remains preoccupied with the slow-motion implosion of Venezuela’s economy and that country’s political and economic crisis, which has increasingly reverberated throughout South America. But those predicting a rapid collapse of the Maduro regime have been proven wrong because they have neglected a stark domestic reality: the Venezuelan government is now waging open political warfare against its own people in order to remain in power. And in this war of attrition, Maduro appears to be winning.