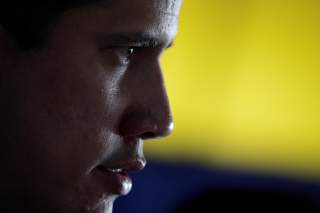 Although the long-suffering people of Venezuela have endured much, and interim president Juan Guaidó is recognized by more than fifty countries, their ordeal is not over.

The illegitimate regime of Nicolás Maduro averted its demise on April 30 after a showdown with the democratic forces of that nation under Guaidó. Americans cannot trivialize the apparent short-term success of the despot Maduro and his cohorts to continue to plunder Venezuela’s country. Nonetheless, the efforts to restore democracy and the rule of law were not in vain, and the resolve by Guaidó and his internal and external allies should not wane. Additional pressure must be brought to bear on Maduro’s unlawful government.

While it was disappointing to see Venezuela’s fractured military remain passively loyal to Maduro in what was the largest single unified effort to oust his illegitimate regime, the root causes for the Venezuelan people’s grievances remain in place. Indeed, they are arguably deepening. Nevertheless, the country’s democratic voices will prevail against the forces of a narco-criminal enterprise that have ruled for two decades. The United States must continue to rally external support for Guaidó and the pro-democracy forces of Venezuela in parallel to the commitment inside Venezuela to see democracy restored to a once prosperous Venezuela.

Unfortunately, the profound suffering of twenty-seven million Venezuelans was extended beyond April 30 by Venezuelan military forces who appear unwilling to recognize that the unlawful Maduro regime will collapse eventually. The shadowy role of Russia, Cuba, China and even Iran—all of whom have everything to lose with Maduro’s fall from power—must get even greater attention. Those countries remain actively engaged in propping up Maduro and his cronies.

The price for undermining the ability of the Venezuelan people to chart their own future must be increased. Venezuela’s current security apparatus is a wholly-owned Cuban subsidiary. Washington has the opportunity to lead Latin American and European allies in countering that nefarious foreign influence in Venezuela. The United States should be aggressive in leading those efforts.

It is not a coincidence that Maduro was intent on leaving Venezuela on April 30 when the Russians talked him out of it. He thought his dictatorship was at an end. Without the engagement by Russia that day, Maduro would have departed Caracas for an undisclosed location abroad via the Bombardier aircraft provided by Russia. Unsure who would stand with him, Maduro’s response to Guaidó’s actions as the legitimate interim president of Venezuela was anemic. It turns out Maduro was incapable of delivering a widespread counter response to Guaidó.

The Trump administration recognizes that an opportunity was again lost for a peaceful political transition in Venezuela on April 30. Risks of future violence only increased as a result of that lost opportunity for Maduro and his cohorts to leave. As tempting as it may be to consider military intervention in support of Guaidó, the United States should not succumb to that temptation. American military intervention would lead to a swift loss of political support that has unified most Western Hemisphere and European nations in isolating Maduro. Increased political and economic pressure is needed not only on Maduro but on his allies.

American resolve to stand by the democratic forces in Venezuela must not waver. Resolve, however, is not enough. The administration should redouble its efforts to increase the cost of Maduro remaining in power and exact maximum pressure on Venezuela’s foreign occupiers. To that end, any economic and financial sanctions not yet placed on corrupt Venezuelan regime officials should be enacted swiftly and vigorously.

No stone must be left unturned by the U.S. Treasury and the Department of Justice. Washington should cut off all of the ability of Maduro and his supporters to conduct financial transactions using the international financial system. Aggressive steps should be taken to freeze the external bank accounts of all Maduro’s corrupt officials. Any non-Venezuelan financial institution known to be harboring Venezuelan illicit regime funds should be sanctioned, regardless of the origin of the funds from Maduro and his officials.

As a positive message to the Venezuelan people, the U.S. Treasury should sponsor a meeting of multilateral international financial institutions to identify how much would be made available for rebuilding Venezuela’s infrastructure after Maduro’s exit. This action would also underscore the fact that Maduro cannot be allowed to preside over any transition to new elections or the restoration of democracy for Venezuela.

The cost of Cuba’s nefarious engagement in Venezuela in enabling Maduro and his corrupt cohorts must be increased. The United States should pursue additional direct pressure on Cuba. Ideally, oil deliveries from the unlawful Maduro regime to Cuba can be stopped with promises of restoration if Cuba ends its occupation presence in Venezuela and actually intends on paying for them in the future.

Moreover, political and economic pressure on the Russian and Chinese governments should be ratcheted up as it relates to Venezuela. Constant and unceasing denouncements of Russian interference in Caracas must be repeated in every international forum.

But talking is not enough. Latin American countries should expel Russian diplomatic officials in various Western Hemisphere capitals to emphasize the discontent with Russia’s actions in Venezuela. Working with European allies, foreign investors in Russia’s largest oil company, Rosneft, should apply pressure in response to Russia’s interference in Venezuela. China, in turn, needs to understand that their financial exposure in Venezuela will not be recognized in a post-Maduro era. It behooves Beijing to act now to face the inevitable change of regime and manage the risk to their exposure in Venezuela for a post–Maduro era.

Guaidó started his quest nearly six months ago to lead his country away from two decades of lies, deception and thievery inspired by a failed ideology and guided by external actors—principally Cuba, Russia, China and Iran. Maduro and his cronies must face a day of reckoning for running a narco-criminal enterprise at the expense of the Venezuelan people.

It behooves the United States and its regional partners to increase the pressure on the illegitimate regime in Caracas. Their strategy of intimidation and persecution of innocent people, including members of the legitimate national assembly, will only add to the long list of crimes by Maduro and his cohorts. The time is now for all those who will stand with the voices of freedom and restoration of the rule of law in Venezuela to increase all available means of pressure to usher in Maduro’s departure. In doing so, those voices will ultimately stand on the right side of history.

David R. Shedd is a former acting director of the Defense Intelligence Agency. He is currently a visiting distinguished fellow in The Heritage Foundation’s Davis Institute for National Security and Foreign Policy.