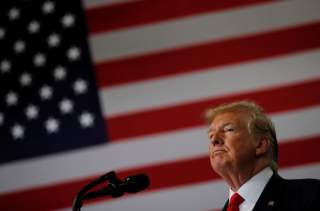 The Cold War consensus gave rise to the saying that “politics stops at the water’s edge.” That was never true, but it is patently untrue today. Put differently, there is no amorphous American “Russia policy,” or “Afghanistan policy”; there was Barack Obama’s policy and now there is Donald Trump’s policy. A voter’s opinion of the policy will turn on her opinion of the leader, and the messages she hears about the policy from elites she trusts.

Ironically, a June article, written by Dina Smeltz for Foreign Affairs, shows that it is opposition to Trump, not support for liberal hegemony, that is propping up support for engagement, allies, and trade. As Smeltz argued, what Democrats are seeking is “what Trump said, but the opposite.” To take one of her examples, Trump is seen as friendly with Russia. In 2016, 38 percent of Democrats saw Russian military power as a critical threat. By 2018 the number was 65 percent.

Trump is also seen as an opponent of free trade. In an NBC News/Wall Street Journal poll in December 2015, 49 percent of independents and 56 percent of Democrats said that international trade was good for the economy. By August 2019, the same poll found 77 and 73 percent, respectively, said it was good, rocketing support for international trade to an all-time high of 64 percent, with only 27 percent opposing it.

In short, the council has things backward. The public is not calling on Washington to stand tall. To the extent voters support liberal hegemony, it is out of habit borne from the decades-long elite consensus on these matters, and because policies seen as closely affiliated with Donald Trump turn off voters who dislike Trump. But the council has promoted the report to policymakers and media elites as if to show that voters are demanding they, too, reject retreat.

Elite rarely have to follow public opinion when it comes to foreign policy. Instead of sending a message to “much of Washington and its foreign-policy elite” that the public is clamoring for a return to pre-Trump liberal hegemony, scholars should urge elites to consider the lessons learned from past decades, the changing international system the United States finds itself in, and to think about what might be the best policies on the merits. Once they have settled on what those are, elites can make their case to the public, win support from their constituents, and put the country on a sounder footing.

Justin Logan is director of programs and a research associate at the Center for the Study of Statesmanship at the Catholic University of America. Follow him on Twitter at @JustinTLogan.

A. Trevor Thrall is associate professor in the Schar School of Policy and Government and a senior fellow at the Cato Institute. Follow him on Twitter at @trevor_thrall.