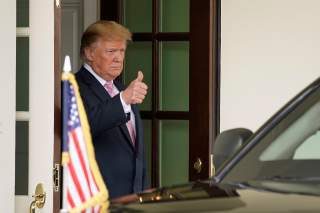 Candidate Donald Trump won the presidency because he talked tough in ways no presidential candidate has done in recent memory, maybe ever. Trump left no sacred cow unscathed with searing attacks on the Iraq War, bad trade deals, Sen. John McCain, and the most sacred cow of them all—illegal immigration. Trump’s words resonated, and millions of Americans delivered victory for Trump at the polls.

As president, Trump’s words remain tough, his actions less so. Trump often praises American military heroes like Gen. George Patton; a man who subscribed to the philosophy of relentless attack. But unlike Patton’s bold and decisive battlefield leadership, Trump's tough talk produces few tangible results. His meandering speeches inspire, but they do not translate into coherent, sustainable policy.

Trump came to office with an instinctive grasp of what mattered most to his countrymen—building the Mexican Border wall, reinvigorating the U.S. economy, securing better trade deals for U.S. industries and improving relations with Beijing and Moscow. To his enduring credit, Trump always understood that the nation’s twenty-plus trillion-dollar sovereign debt combined with the American electorate’s growing resistance to endless wars overseas made the withdrawal of U.S. Forces from Afghanistan, Syria, and Iraq imperative.

Trump’s focus on making life for the average American better worked. In March 2019, the University of Michigan’s consumer sentiment index rose to 97.8 in early March from 93.8 in February. Though trade talks with China continue with an uncertain outcome, in the words of Federal Reserve Chairman Jerome Powell, “The U.S. economy is in a good place.”

However, the president’s frequently stated intentions to secure the Mexican Border, to remove U.S. Forces from Afghanistan and Syria, and to reduce defense spending were followed by confounding reversals that raise serious questions about the president’s focus and his authority. Whenever a president declares big intentions only to contradict them with his actions, he looks impotent. Trump is no exception.

In the opening months of his presidency, Trump seemed to hit his stride with dramatic policy shifts. His threat of a preemptive strike on North Korea brought Kim Jong-un to the negotiating table. Trump, then, pragmatically opted for negotiation and forged the foundation for peace on the Korean Peninsula. In December 2017, President Trump ordered the complete withdrawal of U.S. Forces from Syria while also pressing his feckless generals to exit Afghanistan. He beefed up the number of border patrol agents and deployed small numbers of Soldiers to support the Border Patrol. So far, so good.

Unfortunately, events that began with a bang ended with a head scratching whimper. Trump’s talks in Hanoi broke down. John Bolton’s flawed “all or nothing” proposition torpedoed the deal in another win for the swamp. Just as soon as Trump announced the U.S. Troop withdrawal from Syria, within a few days, Trump backtracked. According to the New York Times, Trump’s advisors convinced him to make a U-turn and keep four hundred troops in Syria.

The number has since increased to one thousand but gallingly, future decisions on when and how U.S. forces in Syria will be reduced or removed is left in the hands of the Department of the Army, not the president! If President Trump wants to extricate U.S. Forces from Syria before a new conflict ignites involving the Turks and Kurds, then he must take command and get the troops out.

There is more. During an April 4 meeting in the White House with China’s Vice Premier Liu He, President Trump suggested that the United States, Russia and China should invest less in their militaries. The statement sounds good, but when the president proposed a $33 billion reduction in U.S. defense outlays he buckled within hours to the demands of former Secretary of Defense Jim Mattis and Sen. Jim Inhofe that Trump abandon his proposal.

Then, there is the Southern border, or what remains of it. The crisis is metastasizing. The chaos, criminality and health issues are so bad that even the mainstream media are beginning to acknowledge it. Surely, Trump should have concluded by now that without an Executive Order that commits the U.S. Army to the defense of the southern border and limits cross-border traffic to legitimate commercial activity, mass illegal immigration will not stop.

The point is Trump’s bold vision is drowning in the Washington Swamp. Talk is cheap and so is leaving important decisions to White House political advisors and senior military leaders with agendas that bear no resemblance to the policy goals that catapulted Trump into the White House. If President Trump continues to waver on issues of vital importance to the country and his presidency; if, in a word, Trump refuses to take command and match rhetoric with action, then he will join the pantheon of failed presidents that promised the world only, this time, the American Republic’s existence hangs in the balance.

Retired Col. Douglas Macgregor, U.S. Army, is a decorated combat veteran, a PhD and the author of five books. His latest is Margin of Victory, (Naval Institute Press, 2016).