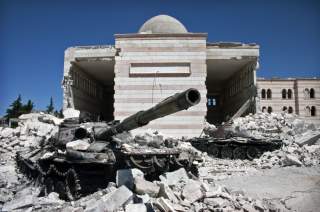 In recent weeks, the United States appears to be simultaneously scaling back and increasing the magnitude and quality of support it is providing to various Syrian rebel groups. On the one hand, on October 9, the White House announced that it would be terminating the Pentagon’s $500 million train-and-equip program to stand up an army of “vetted” Syrian rebels to take the fight to the Islamic State in Syria. The program was a manifest failure, with American-trained rebels deserting, demonstrating ineptitude on the battlefield or handing over their weapons to the Nusra Front and other “bad guys.”

On the other hand, reports surfaced a few days later, on October 12, that the covert CIA program to arm different Syrian rebel groups (separate from the Pentagon’s train-and-equip program) was apparently escalating, with Syrian rebels reporting no-strings-attached drops of anti-tank missiles. The appearance of TOWs in large quantities represents a significant upgrade for rebels who, up until this point, had been restricted to light arms—videos showcasing Syrian rebels with a mere handful of TOWs surfaced in early April of last year, but the numbers were insufficiently large to suggest that a U.S.-led effort to supply the rebels with heavier weapons was underway at that time.

Apparently, the CIA is less concerned than the Department of Defense about heavy weapons falling into the wrong hands; the Pentagon emphasized this past Friday that it would not be supplying rebels with anti-tank or other heavy weapons that could be employed against American interests. It is also possible that Saudi Arabia, rather than the United States directly, is dropping American-made TOWs into western Syria. Nevertheless, Saudi Arabia would be required to receive American consent prior to delivering American-made weapons to a third party.

Do these ostensibly incompatible policies merely illustrate the schizophrenic policymaking process in Washington, or is there a logic that can be inferred from the latest news coming out of Syria? More importantly, what are the implications and consequences of the White House’s changed approach?

The recent admission by White House press secretary Josh Earnest that the decision to establish a train-and-equip program in Syria was spurred on by hawkish critics of President Obama’s Syria policy sheds some light on the administration’s decision-making process and on the risks and tradeoffs associated with proxy warfare more generally. Proxy warfare, in a nutshell, is an indirect approach to conflict. In theory, it enables governments to undermine adversaries or project power without getting their hands dirty because proxies fight on their behalf and pay the costs of conflict in blood (although governments must still expend treasure). Therefore, the apparent efficiencies of proxy warfare—it’s far less costly than a direct fight—are a critical aspect of its appeal. In a domestic political context in which the President faced both pressure from hawks in Congress, including some members of his own party, as well as a reluctance or even aversion on the part of the American public to directly involving American troops in yet another Iraq or Afghanistan, the train-and-equip program likely seemed to be the Goldilocks approach: not too costly, not too wimpy, but just right. Moreover, the authorities inherent in a Pentagon-led train-and-equip program would enable the White House to publicly acknowledge its existence, even while refraining from divulging specific details, thus satisfying the domestic constituency pushing for American involvement in Syria.

This particular aspect of domestic politics is under-recognized in analyses of decision makers’ motives for working with proxies. The prevailing narrative is that proxies are appealing when the public at large is averse to directly paying the costs of war. While this is often the case, decision makers are often balancing those policy preferences against the preferences of principals within the Executive, the President’s political party or Congress. When these formal or informal veto players push for a more robust or direct intervention in a conflict, proxy warfare provides decision makers with a means of co-opting hardliners without committing as many resources.

But cheapness is not the sole allure of proxy warfare—so is its potentially covert nature. Indeed, as defined in Title 50 of the U.S. Code, covert action enables the U.S. government to plausibly deny its role in certain activities. Unlike the Pentagon’s train-and-equip program, CIA operations in Syria are not openly discussed by the administration. Indeed, it’s notable that The New York Times had to rely on reporting from rebels regarding the alleged bounty of American-made TOWs in Syria, rather than official White House reports. Separate from the efficiencies of proxy warfare, the potential secrecy associated with proxies is enticing for governments when they seek to avoid retaliation from adversaries or mitigate the risk of conflict escalation. In other words, if a state can’t be definitively linked to action taken by its proxies to undermine an adversary, the latter is likely to be hesitant to respond.

In Syria, the recent escalation of Russian involvement in the conflict (notably, Russian airstrikes against rebel positions in the western part of the country), rather than U.S. domestic politics, likely accounts for this aspect of the Obama administration’s policy shift in Syria. It would be an understatement to describe the Syrian civil war as messy. Participants and active belligerents include Russia, Iran, Hezbollah, the Assad regime, various jihadist rebel groups, the Islamic State, so-called “moderate” rebels, Syrian Kurds, Turkey, Saudi Arabia, Gulf States and the United States, not to mention the spillover implications for the conflict in Iraq. Ramping up a covert CIA program to arm Syrian rebels could allow the U.S. to counter Russia’s latest moves, while (theoretically) isolating Washington from getting involved in a dangerous cycle of escalation with Moscow. In fact, the location of the CIA’s arms drops—in the western part of the country, where Russian airstrikes are concentrated—is consistent with this motivation (although it’s important to note that the Agency is likely wary of dropping heavy weapons further east where Islamic State fighters could more easily abscond with them).

What are the risks and implications of these kinds of missions? Fundamentally, the direction of proxy wars can be difficult for states to anticipate or control because their involvement is indirect. To some extent, a train-and-equip program could mitigate the risks of slippage because it entails a significant amount of screening ex ante and oversight ex post. However, even in the context of a train-and-equip program, the U.S. found it incredibly difficult to shape the behavior of its proxies—the administration acknowledged that even “vetted” rebels were resistant to the American emphasis on the fight against the Islamic State over the Assad regime. This suggests a greater degree of pessimism regarding the level of control the U.S. government can expect to wield over the proxies on the receiving end of weapons drops, especially when those proxies hold territory in the western part of Syria, where the primary engagements are with the Russian-backed Syrian government rather than the Islamic State.

Furthermore, it is imperative to consider potential second- and third-order effects of expanding a covert program that involves weapons drops of heavy arms into an already volatile conflict. Adding American-made anti-tank missiles into the mix could prompt deeper Russian involvement, increasing potential points of friction and the risk of crisis escalation. Strengthening some Syrian rebel groups could turn the civil war into a stalemate, offering little hope for a sustainable political resolution (academic research has shown that decisive victories in civil wars are among the best predictors of a stable postwar peace). Conversely, if further arming some rebels weakens Assad’s position, it could unintentionally strengthen other rebel groups inimical to American interests (including the Islamic State), by removing pressure from the regime and providing space to regroup. Finally, any number of these outcomes could also further destabilize the situation in Iraq and undermine American efforts there.

Overall, this analysis suggests that while we may be able to infer a logic underlying the latest seemingly contradictory news, a healthy dose of skepticism about the merits of this latest round of American-led proxy warfare is in order.