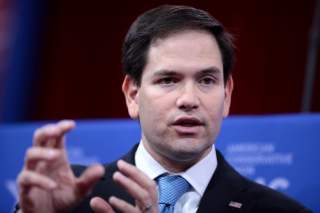 Marco Rubio announced today that he will run again for the Senate and, in effect, against Donald Trump. In lambasting Trump, as he did today, and presumably will for the rest of the election, Rubio explained today that he is, in many ways, being forced to run for the Senate by the threat to liberty that either Hillary Clinton or Trump would present should they attain the Oval Office. Absent his presence in the Senate, he implicitly suggested, a Caesarist president intent on riding roughshod over the Constitution would have a free hand. (This leaves aside, incidentally, the matter of Rubio’s own frequent absences from the Senate.)

Rubio pronounced the prospect of a Trump presidency as “worrisome”—a sentiment that many Americans appear to share, at least if Trump’s current 70 percent disapproval rating is anything to go by (for her part, Hillary clocks in at a slightly less daunting 55 percent). Rubio observed, “as we begin the next chapter in the history of our nation, there's another role for the Senate that could end up being its most important in the years to come: The Constitutional power to act as a check and balance on the excesses of a president." For good measure, Rubio added, “It is no secret that I have significant disagreements with Donald Trump. His positions on many key issues are still unknown. And some of his statements, especially about women and minorities, I find not just offensive but unacceptable. If he is elected, we will need senators willing to encourage him in the right direction, and if necessary, stand up to him. I've proven a willingness to do both."

Who knew that a Republican Senator would run for office by announcing that it was imperative for him to serve as a counterbalance to a Republican president? Whatever one thinks of Trump, this is a novel way to throw your hat into the senatorial ring. Perhaps Rubio should, if anything, be grateful to Trump for allowing him to position himself as a moderate Republican.

But how successful this tack will prove is an open question. Back in April, Rubio was singing from a different hymnal. He appeared to suggest that Trump was no cause for undue concern. His “performance,” Rubio said, “has improved significantly.” Separately, he said, “‘Look, let’s not divide the party.’” Now Rubio’s message seems to that division is fine and dandy.

No doubt Rubio could aver that Trump’s dismal performance in recent weeks is sufficient reason to turn against him. But even then, there is something disingenuous about his attempt to portray himself as a Republican moderate. For one of the peculiarities of the election is that a goodly number of the Republicans bashing Trump are actually more conservative—or, if you prefer a different word, extreme—than him.

Consider Rubio. When it comes to women, his stands are rather iffy. In August 2015 he explained that his opposition to abortion, including in cases of rape and incest, thus: “I think future generations will look back to this history of our country and call us barbarians for murdering millions of babies because we never gave them a chance to live.” On Meet the Press, he said, “I personally and deeply believe that all human life is worthy of the protection of our laws, I do.”

What about Social Security? Trump declared, “It is my intention to leave Social Security as it is.” Rubio, by contrast, said that he would raise the retirement age to 70.

Move to foreign policy and the discrepancies between their stands are no less clear. Rubio wants to take a very hard line against Russia and dispense with the Iran deal. Trump takes a more emollient approach, at least for now, towards the Kremlin, and says he would have sought a better bargain with the ayatollahs.

Rubio’s battle with Trump shows just how far the lines of division have shifted in the GOP. He himself originally ran for office as an anti-establishment Tea Party candidate. Now the establishment is looking to him as a possible savior. As Sam Tanenhaus points out in the New York Times, the establishment conservatives are actually rebelling against the rebellion represented by the formerly docile base. According to Tanenhaus, “The rank and file have spurned party dogma, and the spurned dogmatists are fighting back. ‘The white American underclass is in thrall to a vicious, selfish culture whose main products are misery and used heroin needles,’ Kevin D. Williamson, National Review’s ‘roving correspondent,’ recently wrote. ‘Donald Trump’s speeches make them feel good. So does OxyContin.’”

As he gears up for a new senatorial run and weighs his presidential prospects for 2020, Rubio will do everything in his power to detach himself from Trump. Perhaps Rubio’s gambit will allow him to secure another term. But given Rubio’s actual record, his pious professions of concern about Trump bring to mind Oscar Wilde’s quip, “Morality is simply the attitude we adopt towards people we personally dislike.”