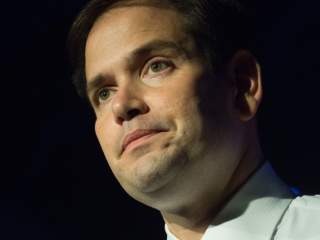 The neoconservatives are busily decrying Donald Trump as a nasty intruder into the ranks of the Republican party. But they themselves are, in many ways, the interlopers, with their ultimate origins dating all the way back to Leon Trotsky. As neoconservative godfather Irving Kristol once observed, “I regard myself as lucky to have been a young Trotskyite and I have not a single bitter memory.” The polemics and crusading fervor of Trotsky’s Fourth International have left their mark on the movement down to the present. In an audacious volte-face, one extreme, you could even say, was switched out for another.

To exercise influence the neocons have always had to have a horse, someone who will purvey their crusading vision to the broader electorate. Once upon a time it was Henry “Scoop” Jackson. Then it was Ronald Reagan, though he proved an imperfect vessel after he recognized that the Soviet Union was rapidly changing. George W. Bush came closest to being a neocon demigod, but after the Fourth International doctrine led to disaster in Iraq, he too began to shift course by 2006. Since then the neocons have been on the search for a new person, a kind of Manchurian candidate, if you will.

When Jeb Bush dropped out of the race, there was only one person left on the merry-go-round, one alternative in neocon eyes who holds a worldview similar to their own and has a decent chance in returning U.S. foreign policy to its former glory. That would be Florida Senator Marco Rubio. On nearly every major foreign policy issue of the day, Rubio makes the likes of Dick Cheney, Paul Wolfowitz and Elliott Abrams proud. Rubio is the neocon man.

Be Tough on Russia

Consider his stance toward Russian President Vladimir Putin. The junior senator from Florida made his feelings abundantly clear during a November 2015 presidential debate on national television when he compared Putin to a Russian-like version of Vito Corleone. “I’ve never met Vladimir Putin,” Rubio said, “but I know enough about him to know he’s a gangster. He’s basically an organized crime figure that runs a country.” And in Rubio’s eyes, the only way to deal with a man like that is through a combination of strength, brute force, isolation and toughness.

Whether the country concerned is Ukraine or Syria, Rubio has consistently advocated for a far more aggressive U.S. policy on Russia, where sticks outweigh carrots and negotiations with Putin are only contemplated if Moscow can capitulate to America’s demands. The Obama administration, says Rubio, has coddled Putin for far too long in the hope that he would transform into a reasonable man, change his stripes and begin acting like a world leader who cares about resolving conflicts, upholding human rights and respecting international borders. As Rubio wrote in a March 2014 op-ed in The Washington Post, “Vladimir Putin’s annexation of Crimea is a direct challenge and long-term threat to the post-World War II international order,” one that can only be contained and driven back through a rigorous economic sanctions regime; lethal support to the Ukrainian military; an expansion of NATO further east; and minimal contact with Russian officials diplomatically. Rubio’s call for cutting off diplomatic exchanges with the Russians would make neoconservatives in Washington smile: after all, why talk to a man who has hate for personal freedom and democracy in his heart?

On Russia’s intervention in Syria on behalf of the Assad regime, Rubio is just as resolute. His proposals are familiar to anyone who has served in the George W. Bush administration: sanction Russian defense firms if they don’t get out of Syria, and make it clear to Putin that Washington doesn’t want Moscow’s help in the counter-ISIL campaign. His final words of advice could have come straight from Dick Cheney’s mouth: “[W]e need to replace a policy of weakness with a policy of strength. We need to restore American leadership and make clear to our adversaries that they will pay a significant price for aggression.”

The Islamic Republic of Iran is the most dangerous, mischievous, duplicitous regime on the planet. In fact, for Rubio, Iran is not a rational actor of the international system. Rather, it’s a country whose leadership embraces martyrdom as a matter of national policy—and that wouldn’t have a second thought about wiping Israel off the face of the earth the moment it acquired a nuclear weapons capability.

Rubio summed this up on the Senate floor on September 10, when he (along with all of his Republican colleagues) actively attempted to block the Iranian nuclear agreement from being implemented:

In short: you can’t negotiate with a man like Ayatollah Ali Khamenei. He is an apocalyptic, religious extremist that preaches for the destruction of Israel, funds terrorist organizations around the region, and props up a murderous dictator in Syria who has killed at least 270,000 of his own people.

For Marco Rubio, the Iranian nuclear agreement negotiated by Secretary of State John Kerry is a form of apostasy—so much so that he signed on to a letter sent directly to Iran’s Supreme Leader trying to convince him to simply walk away from the table, because the next U.S. President wouldn’t uphold the deal anyway. Rubio is perfectly clear on what he would do in the event he won the presidency in November: he would rip it up and pretend it never happened. “[A]s president,” he writes, “I will scrap this fundamentally flawed deal. Instead, I will reimpose the sanctions that President Obama waives and will impose crushing new measures targeting all of Iran’s illicit behavior. . . . The mullahs will no longer have an American president to push around.”

One would hope that a President Marco Rubio would eat those words and instead evaluate the nuclear agreement on its merits, especially given the fact that the IAEA has verified Iran’s compliance with the deal so far.

If there is any foreign policy topic that elicits Rubio’s inner neoconservative, it’s America’s Cuba policy. The son of Cuban immigrants and a Miami native, Rubio is the foremost Cuba hawk in the U.S. Congress (and there are a lot of them), where any opening up of relations with Havana is an abomination that would do nothing but provide the Castro brothers with a new lease on life.

On the Senate Foreign Relations Committee, Rubio has attempted to do everything in his power to roll back the U.S.-Cuba rapprochement that the Obama administration put into effect a year and a half ago. Immediately after President Obama addressed the American people and announced talks to reestablishment diplomatic relations with Cuba for the first time in more than fifty years, Rubio held his own press conference—calling Obama “the single worst negotiator we have had in the White House in my lifetime.” Words like “appeasement” and “naïve” get bandied around when Rubio talks about the administration’s opening to Cuba. But more importantly, his neoconservatism shines through: “When America is unwilling to advocate for individual liberty and freedom of political expression 90 miles from our shores, it represents a terrible setback for the hopes of all oppressed people around the globe.” In other words, under a President Rubio, there will be no ties with Havana unless the Castro brothers reform themselves and open up the Cuban political system to true democracy.

As a member of the Foreign Relations Committee and as Chairman of the Subcommittee on Western Hemispheric Affairs, Rubio has taken out his frustrations on the administration’s nominee to be ambassador to Mexico by repeatedly blocking her appointment—even when he is hundreds of miles away. The nominee, Roberta Jacobson, was the leading U.S. negotiator with the Cubans on talks to re-establish diplomatic relations, and Rubio is making her pay for it. If Rubio is willing to make the White House’s policy change more difficult as a junior senator, we can only assume that he will likely overhaul the entire policy if he sits in the big chair in the Oval Office.

The Israeli-Palestinian peace process is the problem that keeps up giving. No matter which political party occupies the White House, presidents have been unable to solve the Middle East’s most intractable stalemate: how to bring durable, long-term peace and calm to the Holy Land. Rubio, who has received extensive financial backing from Miami car dealer Norman Braman and solicited the favor of Sheldon Adelson, adheres reflexively to the neocon line on Israel.

The tragedy of the dispute between the Israelis and the Palestinians is that the United States, the Arab world, the European Union, and the United Nations all understand what needs to be done. The state of Israel needs to stop building and expanding settlements on West Bank land that in all reasonable scenarios will form the basis of a future Palestinian state; Palestinians must swallow their pride and accept a symbolic right of return; Prime Minister Benjamin Netanyahu will have the accept the reality that East Jerusalem needs to be handed over to the Palestinian Authority; and President Mahmoud Abbas has to stop with the fiction that the 1967 lines as it stood in 1967 will serve as a basis for a future border.