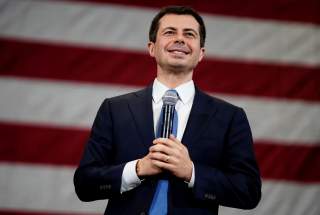 Yesterday Democratic presidential candidate and disputed winner of the Iowa caucus Pete Buttigieg announced his withdrawal from the 2020 race. The millennial former Mayor of South Bend, Indiana and the first openly gay presidential candidate in a major party leaves behind a barrier breaking campaign that—despite its initiatives—failed to expand beyond a limited base.

“Hardly anybody knew my name, and even fewer could pronounce it,” Buttigieg said, genuflecting on where he started one year ago. Taking his adopted nickname national, “Mayor Pete” juggernauted past sitting senators and governors to the center of the debate stage in mid-2019 through a well-orchestrated press tour organized by his advisor Lis Smith.

To the candidate’s credit, and to his opponents’ annoyance, he did not allow a short resume of eight years as mayor of Indiana’s fourth largest city to stop him from joining the big leagues. “I have more years of government experience under my belt than the president,” he often bragged. “That’s a low bar. I know that. I also have had more years of executive government experience than the vice president” and “more military experience than anybody to walk into that office on day one since George H.W. Bush.”

Young, articulate, and intelligent, Buttigieg consistently polled in the top four candidates during the latter half of the primaries. He raised $76 million in fundraising in 2019, more than former Vice President Joe Biden, who he is set to endorse later today. And he finished with a majority of the delegates allocated by the Iowa caucus, and a close second in the New Hampshire primary.

But despite the early gains, fundraising, and media attention, Buttigieg was never able to overcome his deficit among black voters, where he consistently polled in the low single digits. Even the day prior to his withdrawal, the New York Times chronicled his failure to gain adherents among people of color. This lack of diversity led to embarrassing incidents, including his campaign’s fabrication of black endorsements.

The thirty-eight-year-old is expected to endorse a man forty years his senior, Joe Biden, this evening. Buttigieg’s well-timed exit, in the lead up to Super Tuesday, has fueled speculation that the candidate acquiesced to a behind-the-scenes deal. Polling shows his supporters’ loyalties to be evenly divided between the remaining candidates, but an official endorsement for Biden might shift that needle. This is in an effort to prevent the nomination of Senator Bernie Sanders, whose progressive policies Buttigieg criticized on the campaign trail as both too expensive, too exclusionary, and too radical.

Having routinely lambasted his career ceiling in “Mike Pence’s Indiana,” it’s likely Buttigieg would have to either accept a future cabinet position or move out of his home state to advance to higher office. In a theoretical Biden administration, the former mayor could be offered a post like Secretary of Veterans Affairs. Or he could move to, say, Virginia, and attempt a gubernatorial run in 2025.