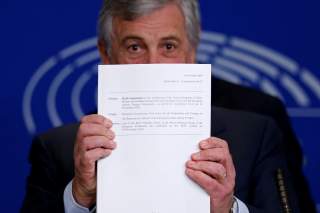 Uncertainty reigns in Britain. Yesterday, Prime Minister Theresa May announced the details of her proposed withdrawal agreement to take Britain out of the European Union (EU). Her plan sparked resignations from the government and catalyzed a bid to topple May as leader of the Conservative Party. Can May remain in office and secure parliamentary approval of her negotiated deal, or will Britain will be plunged into yet more confusion, uncertainty, and instability?

May’s withdrawal agreement provides for Britain to exit the EU on March 29, 2019. But it does not offer a clean break. Instead, a twenty-one-month “transition period” will come into effect, during which European law will still apply to Britain even though London will have no say on the making of those rules. The purpose of the transition period is to buy time for a comprehensive future relationship to be agreed between the two sides, which will settle the complex questions of how Britain will participate in the EU’s Single Market and Customs Union over the long-term.

Critics charge that the terms of the transition period are tantamount to making Britain a “vassal state” of the EU. For them, it is Brexit in name only: their country will remain subject to the EU’s jurisdiction and will lack the full authority of a truly sovereign state, such as the power to conclude independent trade deals. Worse still, a so-called “backstop” arrangement means that Britain will be indefinitely tied to EU rules and regulations unless a formula can be found to prevent the reemergence of a hard border on the island of Ireland.

To some, these flaws in the withdrawal agreement are enough to make it dead on arrival. But May insists (not without good reason) that this is the only viable way forward. She rightly argues that none of her detractors have articulated a recipe for extricating Britain from the EU—which the British people voted for in June 2016—while simultaneously avoiding the doomsday scenario of crashing out of the EU’s Single Market and Customs Union in an abrupt, unplanned, and disorderly fashion. Sober minds in the business community agree: a phased, managed approach is the best available option.

May has raised the specter of two unpalatable alternatives to try and win over the skeptics: Brexit with no deal, or no Brexit whatsoever. Most observers agree that the former option, whereby Britain would exit the EU in unceremonious fashion without any political or economic agreement to soften the blow, is the worst possible outcome for the British economy. Indeed, the prospect is so alarming that any withdrawal agreement looks good in comparison. But “hard Brexit” is exactly what will happen on March 29, 2019, unless a withdrawal agreement is accepted, or Britain and the EU mutually agree to extend negotiations. The clock is ticking, and it’s attached to a timebomb.

It is much less clear whether “no Brexit” is a realistic option at this point. Many people, especially those who opposed Brexit in the first place, certainly hope that there is still an opportunity to call the whole thing off. But it is an open question whether London has the authority to cancel the Brexit process unilaterally. The only means to finding clarity on this issue would be a legal decision from the European Court of Justice, which the British government is currently trying to forestall, or a unanimous political commitment from the EU’s member states, which German chancellor Angela Merkel seemed yesterday to pour cold water on.

May herself has repeatedly said that she has no intention of trying to halt Brexit. More likely than not, she raised the prospect of “no Brexit” simply to rally wavering Brexiteers behind her: if pro-Brexit MPs believe that foreign and domestic forces might conspire to undermine the June 2016 referendum result to leave the EU, it could be enough to persuade them to back May’s deal as an imperfect step in the right direction. On the other hand, if Brexit hardliners do not believe that halting or slowing down Brexit is a credible threat, they might instead be tempted to call May’s bluff by voting down her compromise measure and accepting the default hard Brexit scenario that they openly prefer to so-called “vassalage.”

Herein lies the problem for Britain’s beleaguered Prime Minister: there is simply no consensus within Britain over what the withdrawal agreement or Britain’s future relationship with the EU should look like. This makes it all but impossible for her—or, indeed, any conceivable successor—to actually undertake the necessary business of taking Britain out of the EU in an orderly fashion.

Even if May could count on the support of every single Member of Parliament from her own Conservative Party, she would still lack an overall majority in the House of Commons. This is because May heads a minority government that relies on the hardline Democratic Unionist Party (DUP) from Northern Ireland to stay in power. The DUP looks set to oppose May’s deal when it comes up for a vote in Parliament. Making matters worse, around fifty of May’s own Conservative backbenchers have indicated their opposition to the deal, including former ministers such as Boris Johnson, David Davis, Iain Duncan Smith, Steve Baker, and Dominic Raab. Some are even calling for her removal as Prime Minister.

This fractured parliamentary landscape leaves May with an arithmetic problem. Even if she can face down challengers to her premiership, where can she find the votes to pass her withdrawal agreement? She will receive no support from the Scottish Nationalists, who hold thirty-five seats at Westminster. Nor can May count on the support of the Conservatives’ erstwhile coalition partners, the Liberal Democrats, who oppose Brexit altogether. The Welsh nationalists, Plaid Cymru, will also oppose May’s deal, as will the Green Party MP, Caroline Lucas.

This leaves just the Labour Party. Even though May’s withdrawal agreement is very close to what Labour previously campaigned on—that is, continued access to the EU’s Single Market and participation in the Customs Union, at least for the time being—Labour will most likely oppose the deal in hopes of forcing a political crisis and a subsequent General Election. When May called a snap election last year, Labour’s left-wing leader Jeremy Corbyn surpassed all expectations by increasing his haul of Labour MPs and robbing May of her parliamentary majority. Corbyn smells blood and believes that he would enter Downing Street if a new election were to be called now.

All of this means that there is no clear way forward for Britain. What is certain is that the country is in for some difficult, messy, and painfully acrimonious weeks and months. For May, the immediate priority is to assert control over her party. This should not be taken for granted: it is eminently possible that May could face (and lose) a vote of no confidence in her leadership, forcing her to resign the office of Prime Minister. A new Conservative leader might choose to call a General Election or else ask the EU for more time to negotiate a revised deal. If the EU refuses an extension of negotiations, however, Britain will still face the same choice it faces today: accept May’s withdrawal agreement through gritted teeth or crash out of the EU in March 2019.

If May does hang onto power, what hope does she have of getting her deal approved? It is possible—unlikely, to be sure, but just possible—that enough Labour MPs could be tempted to defy their frontbench to allow May to secure a narrow parliamentary victory. There are more than a few right-wing and centrist Labour MPs who are desperately unhappy with Jeremy Corbyn’s stance on Brexit, and who fear the radical policies that their own party might pursue if it is allowed to come to power amid the tumult of a chaotic exit from the EU. To them, supporting May and allowing the Conservatives to steer through Brexit might yet appear to be the “least worst” option.

The more likely outcome, perhaps, is that May does not secure parliamentary backing for her withdrawal agreement. If that happens, the country will find itself stuck on a conveyor belt out of the EU but with no plan to soften the blow and no leader empowered to negotiate one, whether it be May or some hapless replacement. Could the Conservatives hold onto power and weather the storm by refusing to call a General Election until 2022? Would Britons instead be asked to go to the polls, perhaps electing Corbyn as Prime Minister? Is there any hope whatsoever of avoiding the catastrophe of a hard Brexit? If not, what will be the economic and political impact?

At this stage, it is impossible to know what will come next for Britain. The universe of possible outcomes is as vast as it is disconcerting. What can be said for sure is that there is no real prospect of uniting the country—or even a majority of the country—around a positive vision of the future. Bitterness, division, resentment, and spite are bound to be defining features of the country’s politics for the foreseeable future. Even if this is not quite Britain’s “darkest hour,” things nevertheless look rather bleak.