McConnell Recognizes Biden Victory. Will the Rest of the GOP Go Along? 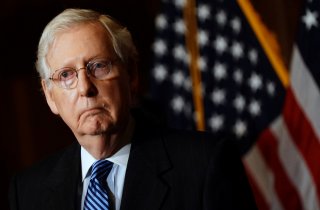 Senate Majority Leader Mitch McConnell (R-Ky.) congratulated President-elect Joe Biden for his White House win on the Senate floor on Tuesday, ending a nearly six-week stretch of ignoring the victory and reality of the election results.

“The Electoral College has spoken, so today I want to congratulate President-elect Joe Biden. The president-elect is no stranger to the Senate. He's devoted himself to public service for many years,” McConnell said.

“Many of us hoped that the presidential election would yield a different result, but our system of government has processes to determine who will be sworn in on January 20,” he added.

In a nod to President Donald Trump and his administration, McConnell touted their successes during the last four years prior to recognizing Biden on the floor, as he dubbed the commander-in-chief as “the outsider who swore he would shake up Washington and lead our country to new accomplishments.”

McConnell’s comments are particularly significant as several Republicans still refuse to acknowledge Biden’s win even after the Electoral College officially certified the election results on Monday.

Some GOP House members have agreed to utilize a constitutional process to object to the election results on Jan. 6, the same day that Congress will convene to accept or reject the Electoral College’s votes. The effort has almost no chance in succeeding, as at least one senator would need to join the group. McConnell reportedly advised Senate Republicans to not back the GOP House push, as it would be “embarrassing” for the upper chamber. To date, no senator has linked to the effort.

But even in brutal election defeat, Trump still has massive influence over MAGA followers, as well as the GOP, considering there are a number of Republicans who have yet to acknowledge the election results.

“Republicans are playing with fire,” Dr. James Morone, author and political science and urban studies professor at Brown University, said. “They’re counting on our political institutions—the courts, the state governments, the electors— to protect our republic while they pander to President Trump and his supporters. But our democratic institutions are built on a political culture. One that accepts political opposition as legitimate and elections as the final word. Denying a clear election result—for a day much less for a month—weakens the bonds that hold our republic together. This is how democracies break down—slowly, then all at once.”

Morone added, “Of course, we can all see why so many Republicans have been fearful about acknowledging the election. Donald Trump has tapped a deep and furious discontent that focuses on Republicans as much as Democrats.” However, “Republicans need to step up, as Senator McConnell finally did, and firmly stand up for our democracy,” he said.

“I understand there are people who feel strongly about the outcome of this election,” Thune, the number two Republican leader, said. “But in the end at some point, you have to face the music. And I think that once the Electoral College settles the issue today, it’s time for everybody to move on.”

Sen. Roy Blunt (R- Mo.), chairman of the inaugural committee, also referred to “Vice President Biden as the President-elect,” after GOP lawmakers on the committee refused to do so just last week. Blunt noted that the group will convene for inauguration planning.

Biden said that he spoke to several Senate Republicans who have congratulated him, and on Tuesday, the president-elect disclosed that he called McConnell “thank him for the congratulations, told him although we disagree on a lot of things, there’s things we can work together on.” The two served in the Senate together and often compromised on legislation when Biden acted as vice president to the Obama administration.

Although McConnell never reiterated Trump’s baseless claims of voter fraud and that he suffered a stolen election, the majority leader remained silent and neglected to confront the electoral win.

“McConnell might also have seen the election challenges as an opportunity to weaken Biden. He probably saw the way Democrats tried to delegitimize Trump by calling Trump’s 2016 election into question, with Russiagate and the impeachment, and figured playing along with Trump for a while was a chance to do the same to Biden,” Dr. Alexander Gourevitch, author and associate professor of political science at Brown, said.

Gourevitch noted that the majority leader “comes out of the Trump presidency the most successful Republican politician of the last four years,” due to his role in the president’s three Supreme Court justice appointments, tax cuts and potentially “keeping the Senate in Republican hands.”

The Kentucky Republican’s remarks on the Senate floor drew immediate pushback from Democrats who are still frustrated with colleagues on the other side of the aisle that have distanced themselves from Biden’s White House victory.

“The fact that it took six weeks for my colleagues to recognize reality and stop undermining our Democratic process is sad and disappointing,” Senate Democratic Whip Dick Durbin (Ill.) said after McConnell took the floor on Tuesday.

“Our Republican colleagues, for the sake of our democracy, for the sake of the peaceful transition of power, should stop the shenanigans,” Senate Minority Leader Chuck Schumer (D-N.Y.) said. “Stop the misrepresentations and acknowledge that Joe Biden will be our next president.”

Even with the affirmed results, it’s clear that some Republicans balk at accepting Biden as the president-elect, likely due to their loyalty to party lines and to the president. But, the hesitancy is “dangerous,” according to experts, and provokes distrust in America’s electoral system.

“But here's the bottom line. Without a strong commitment to democracy and our electoral process—from both political parties—then this dangerous attack on a clear election result will become the norm,” Morone said. “And, when that happens, we're really in trouble. What McConnell did was important and every Republican should follow him. And then learn from this precedent and not repeat the performance.”