Mediterranean Mayhem: Why These 3 Countries Pose a Growing Threat to America 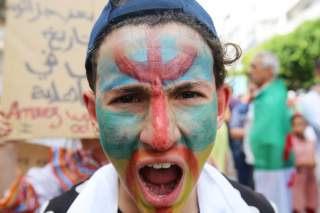 Across North Africa’s Mediterranean coast, the young and the jobless pose a danger to Arab nations and beyond.

Despite real democratic advances, including free elections and a diversity of parties and candidates, democracy has not been able to dispel the radical Islamists or the remnants of the regime of the former dictator. Both threaten Tunisia’s future.

The last legislative elections put the Islamist party “Ennahda” in charge of the parliament, in accordance to the Tunisian constitution. They put together an unruly coalition and never passed significant economic reforms.

Tunisia’s second round of presidential elections, which took place on October 13 after no candidate received the majority of the vote in the September 15 presidential elections, was between Kaïs Saïed, a populist professor who claims to be independent but who largely supports the most radical Islamist theories, and Tunisian businessman Nabil Karoui. Saïed, who specializes in constitutional law, has said that he is against the equality legislation that the Tunisian parliament adopted; he has also claimed that fighting “Zionism” is one of his top priorities. His political opponent, Karoui had just been let out of prison after being suspected of money laundering.

Saïed won the second round of elections. Fortunately, the Tunisian constitution gives comparatively little power to the president.

As for the parliament, it is unlikely to change. The Islamists will likely lead the parliamentary majority, depending on the composition of a new coalition of small parties, which will have competing agendas.

Such a government will likely be unable to provide the economic growth needed to create jobs and hope, which the public is demanding. It will, however, be a breeding ground for radicals of all stripes.

Despite fierce repression, the regime of former President Ben Ali was not able to root out Islamists due to profound social inequalities. They appealed to the university-educated jobless crowd, which has fiercely clung to their detailed theories and anger against the status quo. Meanwhile, the rural poor want farm loans, export markets and law-and-order. Amid the cross-currents of public opinion and the absence of strong institutions, the stage will be set for the re-emergence of a strong man.

One of the Africa’s largest nation is fundamentally different. Since its independence in 1962, the army has dominated the political system. Demonstrations in 1991 led to elections and surprising victory of the Islamic Salvation Front—a group of Salafist extremists who later aligned themselves with Al Qaeda. The Army set aside the election, provoking ten years of civil war and hundreds of thousands of deaths. A negotiated peace finally came, but democracy did not return.

Protests were triggered by Abdelaziz Bouteflika’s bid for a fifth term as president. The old leader is ailing and said to be partly paralyzed. Bouteflika was essentially a mask for a clique who draws its support from the capital and handful of seaside cities.

The Army is still the only national institution that works. But demonstrators have little faith in its ability to midwife democratic reforms or end employment.

This time, the Islamists are not in the forefront of public demonstrations, but they could resurface, just as Egypt’s Muslim brotherhood did after the Hosni Mubarak's removal.

Peace is made more difficult since the army does not have any opposing leader to engage. The concerns of the demonstrators are both political and economic; they object to being both powerless and jobless. Despite Algeria’s oil wealth, the economy is growing too slowly to employ many of the majority of those under the age of thirty. Any political outcome can only be effective if it meets the political and economic expectations of the Algerian people.

Morocco, too, has suffered from upheaval. After the Rif Movement that lasted several months, King Mohamed VI dismissed some of the most important cabinet ministers because they had slowed down development projects in that region. The king then called for a new model of economic development and announced the creation of an ad hoc commission to consider what that model should look like. Meanwhile, the political parties made no proposals.

This week, events accelerated. The king shrank the size of the cabinet to twenty-three members from thirty-eight. This created more accountability and focus.

King Mohammed VI called on the parliament to adopt laws to accelerate economic growth and on companies, especially banks, to combat social precariousness. Moroccan banks lead the world in creating accounts and lending money to the asset-less poor. But more could be done, the king said.

The role of the king appears to be indispensable. His rule made it possible for the Islamist Justice and Development party to both operate as part of a governing coalition in parliament while peacefully and lawfully coexisting with other parties that do not share its views or values. Without the king’s institutional power, the Islamists could easily devolve into authoritarians.

Yet the king alone cannot substitute for the roles of other institutions. The king has delivered what he should as head of state. Unless the parliament and agencies act, economic inequalities and political demands will continue to bedevil the kingdom’s future. Without stronger economic growth, unemployment among the nation’s youth will not diminish and neither will political unrest.

While each of these three nations on the Arab world’s Mediterranean coast have their own history and institutions, each faces an almost identical source of social turmoil: youth unemployment. And that is not just a problem for Arab leaders. Young jobless people will either join radical groups or emigrate to Europe and North America. They are an army without uniforms who presents a threat to the stability of the industrialized world. These Arab nations desperately need help from the West. They need free trade, technical assistance, foreign investment and, yes, aid. Their future is at stake, and America’s future is at stake, too.