Meet the New Taiwan: Trained for War and Ready to Fight 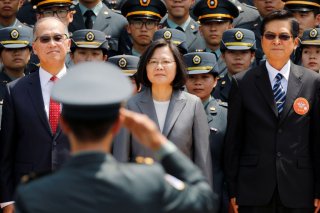 As China continues to threaten Taiwan with force, many, including the United States, are beginning to ponder if defending Taiwan is worth the cost. A major component of the suspicion is that it is unclear to many observes whether the military training in Taiwan could be counted on for the potential conflict. Conventional wisdom and anecdotal evidence often suggest that citizens in Taiwan do not have high regard for the military and do not consider their conscription training to be helpful in a fight with China. Combined with the fact that the defense budget continues to hover around 3 percent of annual GDP, the United States is cautiously concerned that the citizens in Taiwan are passing the buck of self-defense to the United States in a conflict, which, if poorly managed, could escalate into a nuclear Armageddon. But do these myths hold water?

We bust these myths by providing evidence from a survey of the public’s experience of conscription in Taiwan. Contrary to the existing beliefs, many Taiwanese citizens consider their conscription experience useful for the battlefield, which translate into a higher level of willingness to self-defend Taiwan. Although Taiwan has transitioned into an all-volunteer force system since 2018, most of the male citizens aged eighteen have served in the military from as short as several months to as long as three years in the past several decades. The living experience of these men serving in the military, and their perceptions of the military and its training give us the best estimate to gauge if the conscription has any effect on the public’s willingness for self-defense against China. To our understanding, this is the first ever comprehensive survey that tackle this question in Taiwan.

The survey was conducted by a polling center housed inside National Chengchi University in Taiwan from July 3–5, 2018. We asked 490 Taiwanese respondents aged twenty years and older three questions based on their military experiences: 1) their branch of military when conscripted, and 2) the degree to which they consider their military training beneficial for confronting an enemy. Afterwards, they answered a question of self-defense: on a scale from 0–10, 0 being most unwilling, 10 being most willing, how willing they are to join the military or act to defend Chinese invasion?

The results showed that most of the respondents (62.4 percent) considered the conscription training to be helpful in the battlefield. Our statistical analyses revealed that when citizens consider the training to be helpful, it will increase their willingness for self-defense by as much as 6 percent. Thus, the result does not support skeptics’ claim that the Taiwanese public considers that conscription training to be of little utility and could not help preparing them for war.

Our findings also indicate that those who have served in the air force report higher levels of willingness for self-defense. On average, having served in the Air Force is linked with an increase of 12 percentage points in their willingness to defend Taiwan. We contend that this statistical finding may have to do with the fact that the air force remains one of the most capable branches in Taiwan’s military (ranked thirteen out of 137 countries) and continue to receive financial and logistical support every year. Thus, civilians having served in the air force might feel better equipped for war and have higher morale.

When we delved into the factors that influence the public’s perception of the military training, to our surprise, we found that the only variable that mattered is one’s age. This means that how the public evaluates their military experience in Taiwan is a non-partisan issue. The senior cohorts in Taiwan were more likely to consider the military training useful, which could be attributed to their experience in wartime (the most recent combat that Taiwan engaged in took place in 1958, the 823 Artillery Bombardment at the islands of Quemoy, also known as the second Taiwan Strait Crisis).

In conclusion, our survey reveals an important finding: contrary to the widespread beliefs that the public in Taiwan consider their military training to be ineffective in preparing them for an actual combat, our polls suggest otherwise. Our study thus sends a reassuring signal to the United States, that the public in Taiwan is in fact far more capable for self-defense than previously imagined. This finding sends a clear message to Beijing that a conflict with Taiwan is not worth the trouble. For Taipei, our message is: military training ought to continue, and there is no need to worry that the public will stand behind it.

Charles K. S. Wu is a PhD student in the Department of Political Science at Purdue University. He can be reached at [email protected].

Austin Wang is an assistant professor in the Department of Political Science at the University of Nevada, Las Vegas. He can be reached at [email protected].

Fang-Yu Chen is a PhD candidate in the Department of Political Science at Michigan State University. He can be reached at [email protected].