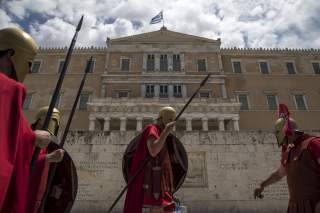 ATHENS AND Sparta were not only the great powers of classical Greece, but also exponents of sharply diverging visions of what a fulfilled human life might be. Sparta idealized self-effacement and engaged in constant training and readiness to defend itself. Athens, by contrast, prided itself on cherishing the pleasures of private life without succumbing to a self-indulgent disregard of its civic and military duties. At least this was the flattering description offered by Pericles after the first years of the great war with Sparta and its allies in 430 BC.

Athens may have been the first democracy, with architecture and drama second to none, but until the nineteenth century Athenian politics enjoyed a dismal reputation. Its democratic assemblies provided a cautionary tale of turbulence and disorder, proof that an ignorant mob was incapable of self-government. Ancient commentators were no better disposed to the rule of the demos; their warnings were taken to heart by the American founders, who sought, as far as possible, to shield government from the depredations of direct popular rule. Since then, of course, the barriers have steadily fallen and the stock of Athens commensurately risen. Now Paul A. Rahe seeks to restore the earlier veneration of Sparta. His aim is to teach, or at least remind, Americans of the difference between a republic and a democracy, a distinction that he believes has been effaced to our peril.

Rahe’s view of America could hardly be direr. In his massive Republics Ancient and Modern, which was published in 1992, the same year as Francis Fukuyama’s The End of History and the Last Man, Rahe first offered his meditations on the future of the American republic. Both Rahe and Fukuyama have been deeply influenced by the political philosopher Leo Strauss, who emphasized the gulf (alluded to in the title of Rahe’s book) between ancients and moderns. But unlike Fukuyama, whose reaction to the outcome of the fall of the Soviet Union was mixed, Rahe took no comfort from it at all. Quite the contrary: he maintained that there was nothing to be complacent about. The United States had long ago abandoned the ideals of a virtuous republic, replacing them with an administrative state that coddled its wards from cradle to grave. Since then, Rahe has offered similarly despondent verdicts in a series of erudite studies of Machiavelli, Montesquieu, Rousseau and Tocqueville. Though his latest studies of Sparta do not comment explicitly on the decadence of the West, their warm embrace of Spartan ways, particularly when read in light of his previous works, may be taken as an implicit condemnation. Indeed, essential chapters of Rahe’s Republics have been incorporated into the present Regime.

RAHE’S POLITICAL pugnacity may help explain why such a prolific scholar, whose books appear under the auspices of eminent university presses, teaches at Hillsdale College in southern Michigan. Hillsdale presents itself as a nondenominational Christian institution whose mission is to guide its students back to the precepts and ideals of the Founding Fathers. As Erik Eckholm observed in the New York Times, scholars at Hillsdale allege that the American tradition, as laid out in its founding documents, “has been desecrated by a century of governmental overreach, including the New Deal and Obamacare.” Larry P. Arnn, the president of Hillsdale, and a former president of the Claremont Institute, which forms something of a redoubt of West Coast Straussians, declared that 2017 augured a “beginning to restore limited government.” Rahe himself has denounced everything from progressivism to the New Deal with gusto, pointing to a “steady erosion of our political and our private rights” in his book Soft Despotism, Democracy’s Drift. A staunch fiscal and moral conservative, Rahe described Trump on his personal blog in November 2016 as a “swine” and “no conservative,” but stated that the depravity of Hillary Clinton and the Democratic Party meant that “you should hold your nose and vote for the slimeball anyway.”

For all his zest for polemics, however, Rahe is careful not to allow it to mar his scrupulous scholarship. His latest works, The Spartan Regime and The Grand Strategy of Sparta, thus offer a fine opportunity to examine the legendary warrior society. He covers a wide swath of territory, seeking to understand Sparta as it understood itself. Throughout, Rahe displays an unruffled temper in carefully weighing the evidence and in deciphering Greek and Oriental sources, apart from his disdain for social scientists. “Thou shalt not,” he might say along with Auden, “commit a social science.”

Since the very concept of “society” could not be predicated of the ancient polis, there is nothing for social scientists to study. If there is no society, then the primacy of politics becomes obvious. Indeed, the first volume of Republics Ancient and Modern begins with a chapter entitled “The Primacy of Politics in Classical Greece.” Ancient thinkers may not have had the concept of a society in their kit bags, but that doesn’t bar us from using it in a cautious way if we find things that look like and talk like “society.” The concept of politeia, which Rahe terms “regime,” (a practice popularized by Strauss) is expansive enough to include almost anything societal. Xenophon, for example, begins his Politeia of the Lacedaemonians with a disquisition on Spartan childbirth and marriage practices. Rahe, like the rest of us, is bound to have recourse to contemporary criteria, just as his interest in Sparta may have some of its sources in current political tensions. The question hovering over his work is whether he offers an idealized portrait of an ancient society unflinchingly subordinating untutored impulses to the common weal.

A formalistic view of politics sometimes distorts Rahe’s understanding of the texts. “Thucydides,” he writes, “depicted the great war between Athens and Sparta as an epic contest between two different polıteíaı and used his history to analyze the weaknesses of each.” He seems to have in mind the contest between a democratic regime and one that is a mixture, with democratic, aristocratic and monarchical elements balanced against each other. Thucydides, in fact, has virtually nothing to say about the structure and workings of the Spartan regime, save for what emerges incidentally from his narrative of the war. He does advert repeatedly to the contrasting character traits of Athenians and Spartans, the former ever on the lookout to seize an advantage, oriented towards what is new and challenging, while Spartans for all their military prowess are sluggish, slow to react and more intent on preserving what they possess than searching for new worlds to conquer. Athenians are mobile, turning to the sea for commercial gain and creating the naval empire that strengthened and radicalized their democracy. By enlisting in the fleet, Athenians of the lower census classes won political influence, while tribute from the subject cities enriched the “tyrant polis,” as it came to be known to those allies. Of these political ramifications, though, Thucydides has little to tell.

In contrast to the Athenian temper, caught by Thucydides in the unforgettable phrase “in doomed love of what is far off,” Sparta would not have gone to war with Athens had it not been consumed by fear of Athenian expansion. Its power rested in the land; it resisted the foreign influences to which Athens was exposed, in part by periodically expelling outsiders from its territory. When Xenophon, after praising the Lycurgan constitution, laments the depths to which the polis has sunk in neglecting Lycurgus’s laws, he singles out the failure of the Spartans to continue the expulsions. Without a rigorous exclusion of the new, the Spartans could not be relied upon to preserve their noble traditions.

THE SPARTANS were, of course, notorious for their piety. Athenians, as shown among much else by the trial of Socrates, were not deficient when it came to religious fanaticism. But Spartan devotion to ritual exceeded the norm of Greek societies. Spartans nourished close ties to the oracle of Apollo at Delphi, which returned the favor. Spartan hoplites turned up a day late for the Battle of Marathon with the excuse that they had been held up by a religious festival. But the picture of Spartan caution and reluctance to project its military power would be incomplete without mentioning the peril posed by the Helots. The Helots constituted the majority of the slaves held by Spartans; they performed the labor, agricultural, domestic and craft-oriented, for their masters, who were forbidden by law from engaging in labor of any sort apart from hunting and military exercises. Chattel slavery, to be sure, was ubiquitous in the Mediterranean world. The Spartan variety was different in that it procured a servile labor force neither by war, nor purchase, but through the conquest of the southwest Peloponnese, particularly Messenia.

The Messenians, bound to their ancient soil, continued to cherish national memories and aspirations during centuries of subjection. By contrast, Athenian slaves, numbering perhaps many multiples of the free citizens, were polyglot and deracinated; we hear of no rebellions. The Messenians took to arms in at least three fierce conflicts. Indeed, a permanent state of war existed between Spartiates—the citizen-warriors—and the Helots. At the beginning of each year, the ephors, or overseers, declared war on the Helots; that allowed any Spartan who murdered a Helot to escape the pollution he would otherwise incur. As part of their initiation into manhood, young Spartans became members of the Krypteia. The object of this secret service was to catch and kill any Helot it might find roaming about during the night. Night became a natural element for Spartiates, who were forbidden to use torches when they moved about in the dark, and whose armies marched at night. Rahe acknowledges in the conclusion of Regime that the privileged communal life of the Spartiate seigneurs had “one precondition: Lacedaemon’s continued dominion over Laconia and Messenia and her brutal subjection of the Helots on both sides of Mount Taygetus,” which separates Laconia from Messenia.