Meeting the Challenge in Asia 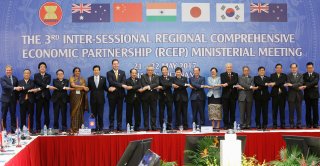 TRUMP ADMINISTRATION veterans like to argue that they have “transformed” American foreign policy—first, by emphasizing strategic competition among the big powers, and second, by centering this competition on the rise of Chinese power in particular. Trump’s former National Security Advisor, H.R. McMaster, touts “the competitive approach to China” as “the biggest shift in U.S. foreign policy since the Cold War.”

But to compete in geopolitics—as in sports, business, and life—one needs to actually compete. Washington has to outperform the Chinese competition, not just belittle it. And it has to define the competition in terms that are both realistic and workable.

By these standards, the United States is not just falling short. It is making three significant strategic mistakes that have undermined its competitive position. To succeed in Asia, President-elect Joe Biden will need an administration that whines less, competes more, and leverages American strengths in the Asia that actually exists, not the one of its wishes, dreams, and fantasies.

For one thing, competing with China requires enlisting partners in Asia. And while many Asian governments also think in competitive terms and seek robust U.S. engagement to counterbalance Chinese power, they need Washington’s efforts to reflect two objective realities of their region—the map, and economic gravity.

The map matters because China is the only country that is geographically contiguous to every subregion of Asia—Northeast, Southeast, South, and Central. This unchangeable fact gives China an innate ability to leverage the map in ways that the United States cannot.

Beijing can, for example, build a highway from Pakistan to western China; Washington cannot build a bridge from Kazakhstan to California. So when the United States trashes Chinese infrastructure initiatives, it has had no comparable ability to offer an apples-to-apples alternative.

To compete, Washington needs to play to its own competitive strengths: access to capital; best-in-class companies; world-beating technology; and connections to global supply chains. But the fact is, the United States has largely faded, or else opted out commercially, from about two-thirds of the Eurasian landmass. American firms and investors are either not present, barely present, or else growing their roles in absolute terms while fading in relative terms in most of Central Asia, much of South Asia, and large swathes of mainland Southeast Asia.

Put simply, China bulks larger as a trader, builder, and lender in much of Asia. Yet despite these objective realities, American messaging persistently urges Asian partners to fight the map and push wholesale against economic gravity. On trips this year to Central, South, and Southeast Asia, Secretary of State Mike Pompeo elected not to emphasize American initiatives but instead to trash talk the Chinese competition, an approach that yielded counter-messages and flatly contradictory statements from the very governments Pompeo was attempting to rally.

In effect, Pompeo and the administration have turned upside down a famous aphorism attributed to former Deputy Secretary of State Richard Armitage. Instead of “getting China right by getting Asia right,” as Armitage liked to put it, they have made relationships and policies in Asia derivative of their approach to China—signaling to Asian capitals that they are of scant interest to the United States on their own terms because Washington has no dedicated agenda for the region apart from enlisting them as proxies in its strategic competition with Beijing.

No wonder Washington is falling short: it is long on attitude but short on regional strategy.

A second mistake has been to treat strategic competition with China almost exclusively as a security challenge, not an economic one.

China is an undeniable threat to American security interests, so reinforcing deterrence must be an important strategic priority. But there can be no basis for collective security in the Pacific until China and Japan reach a rapprochement analogous to the one between France and Germany since 1945. And since that is not in the offing, American security leadership will remain a central feature of Asia’s landscape as far as the eye can see.

So long as Washington invests in alliances and security partnerships, upgrades access for its forces, and modernizes its weapons platforms, it will remain Asia’s essential security balancer. Nearly every Asian country, from Japan to Vietnam, fears Chinese coercion and seeks a robust American balance to Beijing’s growing naval power and projection capabilities.

But even as Washington reinforces its security role, its economic leadership in Asia is now in jeopardy. And American success has been premised not just on being the region’s security provider but also on being the principal driver of demand for Asian exports and leading as the setter of standards.

The problem, therefore, is that East Asian economies increasingly drive their own intermediate and final demand. Intra-Asian trade is eclipsing trade with the United States. To compensate, Washington should be reinforcing its longstanding role as Asia’s rule-maker. But Trump withdrew from the Trans-Pacific Partnership, now called the Comprehensive and Progressive Trans-Pacific Partnership (CPTPP), leaving the United States outside both agreements—the CPTPP and the Regional Comprehensive Economic Partnership (RCEP)—that will set trade and investment standards in Asia for a generation.

By reinforcing its security role while allowing the other pillar of its leadership to atrophy, Washington risks becoming the “Hessians” of Asia—a military force that all except Beijing rely upon but whose economic involvement grows in absolute terms while markedly receding in relative terms.

Meanwhile, India, a key partner, is likewise absent from CPTPP and RCEP. And it is nonsensical for American officials to flog the “Indo-Pacific” as the organizing concept of strategic competition with China if the largest economies in the “Indo” and across the “Pacific” are both absent.

A third mistake has been to wish away the scope and scale of change since the global financial crisis. America cannot turn back the clock to the Asia it bestrode like a colossus from 1945 to 2008.

Instead of just producers and exporters, Asians are now consumers and importers. They are capital providers, including to one another, not just recipients. And economic integration is making Asia more “Asian” and less “Pacific” without it becoming the Sinocentric region that Washington fears. After all, Beijing is also absent from the CPTPP, and it is Japanese, not Chinese, project finance that predominates in both Southeast Asia and India.

Biden’s challenge is to adapt American strategy to this vastly changed region, not to fantasize an impossible rewind to the Asia whose defining characteristic was American centrality in every realm.

Economic gravity means that the old Asia will not return. But America can adapt and, yes, compete with China by leveraging uniquely American strengths—from innovation ecosystems to the rediscovery of its role as a standard-setting nation. And for Biden, unlike Trump, it will be easier to deploy that leverage in the context of messages that do not bluster about, “America First.”