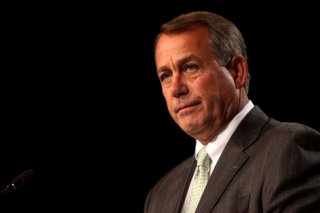 When House Majority Leader Kevin McCarthy stunned Washington by pulling out of the race to succeed John Boehner as speaker, it brought to mind another Republican politician who recently crashed and burned.

Scott Walker, whose chances of winning the GOP presidential nomination once looked almost as promising as McCarthy’s chances of becoming speaker, had an interesting way of distinguishing himself from fellow Republicans.

Walker said there were Republicans who had experience winning but avoided picking important fights. You could imagine he had Jeb Bush, who has talked about losing the primary to win the general, and John Kasich, who accepted Obamacare’s Medicaid expansion in Ohio, in mind.

The Wisconsin said there were also Republicans who had experience fighting the good fight for conservative causes, but often without success. One imagines Ted Cruz’s unsuccessful bid to defund Obamacare was an example of what he was talking about.

While Walker was clearly alluding to his onetime rivals in the presidential race, his point applies with even greater force to the Republicans in Congress. Their establishment or leadership class has experience winning and holding power. Boehner in particular has excelled in the art of self-preservation, as well as rescuing the party as a whole from certain public relations fiascoes.

But to what end? Americans, including some conservative Republicans, are confused about the GOP’s positive governing vision. Even the negative vision of beating Barack Obama when it counts most often eludes them. Beyond sequestration, a partial spending victory many moderate Republicans and defense hawks revile, there has been little fighting--and the winning has largely been confined to the midterm ballot box.

Conservatives may be unrealistic about many things, but it doesn’t seem entirely fanciful for Republicans to think there is something to be gained from fights over Obamacare, late-term abortion and unchecked mass immigration.

Then there are Republicans in Congress who are always spoiling for a fight but can’t explain to you how their battles could possibly be won, especially when their objectives often require Obama’s signature and their only weapon is shutting down the government.

Many of these Republicans believe government shutdowns are harmless because the party has often maintained control of Congress afterward, even gaining seats following the 2013 partial shutdown. (In that case, the shutdown happened a year before the congressional elections and had already largely been forgotten by the time most lawmakers were on the ballot. Ask Ken Cuccinelli, who had to run for governor of Virginia while it was going on, how helpful it was.)

And of course, most of the no-surrender caucus represents safe Republican districts where they can survive such machinations with relative ease.

However honorable the fights, they seldom result in victories. From Obamacare to federal funding for Planned Parenthood, the taxpayer dollars flow. Sometimes there’s truth to the saying that lost causes are the only ones worth fighting for. Usually in politics, however, it is best to achieve at least symbolic wins that may change public opinion over time.

Or to paraphrase a quote often attributed to George Patton, the object of politics isn’t to lose your majority but to make some other dumb bastard lose his. (Well, politics should have a nobler object than that, but you get the point.)

Winning for winning’s sake has no purpose, as wielding power should never be an end in itself. But you cannot use politics to effect change without ever controlling the levers of government. Walker was right that Republicans need someone who both fights and wins. But that message wasn’t persuasive enough to beat a reality TV show star in a presidential debate, and he wound up out of the race before the first ballot in Iowa was even cast.

The governor of Wisconsin might not have been the right messenger, but until Republicans heed some version of this message, the best representative of their party won’t be Walker, McCarthy or Boehner. It will be Casey Stengel.

Can’t anyone here play this game?

W. James Antle III is politics editor of the Washington Examiner and author of the book Devouring Freedom: Can Big Government Ever Be Stopped? He tweets at @jimantle