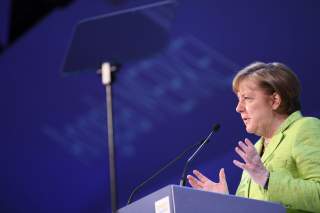 The joke is that nothing good ever follows an aggressive German military buildup. But what about when Germany aggressively doesn’t build up its military?

That’s the quandary facing President Donald Trump and Chancellor Angela Merkel following last week’s NATO summit, where Trump demanded that European nations fatten their military budgets and refused to outright endorse the alliance’s Article Five security guarantee. Merkel was always going to disagree, but the forcefulness of her response sent tremors rumbling under Europe and the Atlantic. “The times in which we could completely depend on others,” she said, meaning Trumpian America and post-Brexit Britain, “are, to an extent, over. I’ve experienced that in the last few days. We Europeans truly have to take our fate into our own hands.” On her heels came German foreign minister Sigmar Gabriel, who accused Trump of putting “peace in Europe at risk.”

Merkel’s broadside was particularly provocative in that it seemed to assert that Germany’s Anglophone allies could no longer be trusted at the vanguard of the West. In that, it was reminiscent of Donald Rumsfeld’s observation back in 2003 that Germany and France constituted “old Europe,” for which he rightfully received two earfuls of condemnation. Today, one expects such provocations from a hiccuping Jean-Claude Juncker, not the elected leader of Europe’s most powerful nation. Fortunately, Merkel is throwing pebbles at a steel wall. The United States is Germany’s top export partner, and Berlin and Washington are dependent on each other for those aforementioned security guarantees. The American-German relationship is too imperishable to spoil so easily.

Merkel, that famously unbreakable pillar at Europe’s center, surely understands this, and she’s weathered vitriol from Trump in the past without cracking. So why would she say such a thing now? The answer has more to do with Europe than it does with America. Merkel’s remarks had two target demographics, neither of them located in the United States: her center-right voting base back home, and British prime minister Theresa May.

As to the first, Germany will hold Bundestag elections on September 24, and while Merkel was initially treated as a shoo-in for another term as chancellor, a surprise challenger has appeared out of the mist. Martin Schulz, the former president of the European Parliament, announced late last year that he would seek the Social Democratic Party’s (SPD) nomination to challenge Merkel as chancellor. He won it handily and Germans briefly swooned for the balding, bespectacled, mercurial eurocrat, whose term in Brussels had left him unsullied by recent domestic political controversies. Alas, Merkel eventually regained control by emphasizing her party’s commitment to security and papering over her admission slips for hundreds of thousands of Muslim refugees. A bevy of recent polls and three consecutive regional election losses for the SPD suggest Germans are once again falling back into Merkel’s steady hands.

But Schulz still has a powerful weapon: his unyielding contempt for Donald Trump, whose disapproval ratings in Germany have sunk to bubonic levels. Schultz has labeled Trump’s policies “un-American,” while positioning himself as a liberal and pro-European antidote to the populism that’s recently roiled the West. Merkel herself had been more tight-lipped about Trump’s presidency; after the NATO summit, no more. Her remarks are an indication that, even amidst recent populism, revulsion to Trump is a potent political force at the heart of Europe.

The second of Merkel’s intended targets, British prime minister Theresa May, is the more consequential of the two. May right now is trapped between a trifecta of political pressures: the mandate for Brexit established in last year’s referendum, a British electorate taking a surprise second look at Labour in the general election she called, and European Union elites determined either to make the UK stay or pay. That last factor has involved a subterfuge campaign from inside the EU. Its culmination came earlier this month, when details of an allegedly strained dinner between May and Jean-Claude Juncker were leaked to the public, with comments appended from Juncker that the British prime minister was “deluded” and “living in another galaxy.”

The leak reportedly left Merkel “annoyed” with Juncker (she spends a good deal of time being annoyed with Juncker) but that didn’t mean she was about to abdicate the war of words against the UK—she would just be subtler about it. Her post-summit comments lumping in Britain with the United States were intended as a fire alarm to May: you either stand with us or with the NATO-undermining, climate change–questioning, Saudi Arabia–arming mutant spat up from the darkest chasm of the American psyche and presently on a rampage across your continent. No taking both sides: it’s one or the other. (That’s how Germany sees it, not me.) London, which needs the United States in its corner to make a success of leaving the EU, now faces a time for choosing, and if Merkel’s elucidation of that creates additional election headaches for May, that’s just how post-Brexit gamesmanship works.

As for our president, following Merkel’s comments, he had the rare moral high ground. Trump might have laid out how interconnected America and Germany are. He might have chided Merkel for diminishing their relationship. He might have noted that he was elected precisely because voters wanted a break from Davos shibboleths like the Paris Agreement and easy immigration. He might have pointed out that if the West doesn’t stand for the self-government of its peoples, then it stands for nothing. He might have offered Merkel another invitation to Washington so they could hash out their differences.

Instead, he jumped on Twitter and pronounced that German policies are “very bad for U.S.”

Thus did the rhetorical chasm across the Atlantic widen by another mile. Trump and Merkel have serious disagreements, but their sniping is dwarfed by the challenges that should be uniting our two countries, among them combatting ISIS and checking Russia. This recent lapse into squalidness should concern us, even if the danger is unlikely to be terminal.