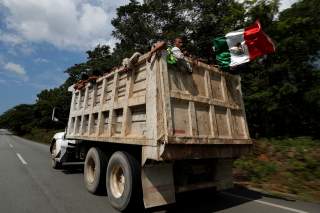 Mexico’s President-elect Andrés Manuel López Obrador appears likely to abandon much of his country’s war on drugs shortly after taking office next month.

That’s based on a State Department memo obtained by Judicial Watch, a government watchdog group.

This is almost certain to put a big chill on what has been a thaw in relations between the United States and Mexico.

AMLO, as the incoming leader is commonly known, has been compared to President Donald Trump for his nationalist zeal and to Sen. Bernie Sanders for his leftward leanings. Either way, he’s a firebrand politician who won by raging against the failed policies of the entrenched political class in his country.

Trump had kind words to say about AMLO after his election. AMLO, after running on an anti-Trump platform in Mexico, voiced his support for the U.S.-Mexico Trade Agreement, negotiated between Trump and outgoing President Enrique Peña Nieto. The trade deal replaced the North American Free Trade Agreement, for which the president-elect was no fan of either.

Trump respects strength, which AMLO certainly projects. But, that only goes so far. The president-elect has referred to migration into the United States as a “human right.”

And, according to the State Department’s memo titled “Mexico’s Drug War & AMLO: Crime; Drug Trafficking; Narco-Terrorism,” we can expect big changes in law enforcement. The four-page memo was dated November 2.

Core to the problem of illegal immigration into the United States has been smuggling by Mexican drug trafficking organizations. While Mexico arguably hasn’t been all that effective, in recent years, its government has stepped up its effort to assist the United States in combating cartels.

The president-elect, however, plans to decriminalize both marijuana and poppy cultivation—and do so early in his term, according to a State Department’s Bureau of Diplomatic Security’s memo obtained by Judicial Watch.

He also plans to pardon some drug offenders. Further, he wants to halt Mexican military intervention against the drug trade.

“The promised amnesty deal with organized criminal groups and the pledge to investigate and prosecute corrupt politicians, many of whom are in business with the cartels, prompts concern about increased impunity for violent offenders,” the memo states.

In what is possibly an inadvertent U.S. domestic policy argument regarding gun regulations, the memo says Mexico’s laws aren’t disarming the most violent criminals.

“Although Mexico employs strict gun-control laws, criminals are often armed with guns, which has resulted in the increase of homicide incidents in Mexico,” the document says.

“While most of these homicides appeared to be targeted, criminal organization assassinations, turf battles between criminal groups have resulted in violent crime in areas frequented by U.S. citizens,” it continues. “Shooting incidents injuring or killing bystanders have occurred. In some states, members of these groups frequently maintain roadblocks and may use violence towards travelers.”

Many on the left and the right have given up on the war on drugs in the United States, concerned it’s unwinnable and simply creating more crime. In an academic setting, it might be reasonable to argue that these Mexican trafficking organizations would lose power if they were operating outside the shadows. But, outside the realm of political debate is that violence related to illegal drugs is horrendous in Mexico. In the near term, going soft may not be realistic.

If U.S. politics seem to be getting more dangerous, consider that in 2018, there were 774 attacks of some type against Mexican politicians and 152 politicians were killed in these attacks, the State Department notes. On election day alone this summer, 138 assaults were reported in Mexico.

The Central American caravan has dwindled, and it may even dissipate by the time it reaches the U.S. border, as immigrants realize that the military is at the border. U.S. troops are only providing an assist and administrative role for Customs and Border Protection without the capacity to make arrests. Still, the presence should serve as a deterrent.

If the Trump administration believes drugs and violence will only get more out of hand in Mexico under the Obrador administration, the president might determine there’s good reason to maintain a militarized border for the foreseeable future.

Fred Lucas is the White House correspondent for the Daily Signal. The views expressed are solely his own. Title and publications listed are for identification purposes only. Follow him @FredLucasWH.