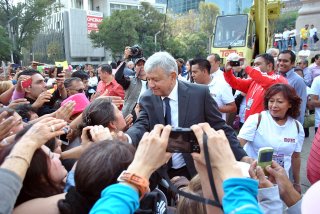 Mexico is the third largest trade partner of the United States, the location of considerable foreign direct investment and is closely linked with its North American neighbors economically through the North American Free Trade Agreement (NAFTA). With the election of Donald Trump, the nature of U.S.-Mexican relations has become highly uncertain, as the new U.S. leader has signaled that NAFTA is up for renegotiation, that U.S. jobs will not be lost to its southern neighbor and that tighter border security will be imposed. One consequence of Donald Trump’s “America first” campaign is that the U.S. president could find himself after the 2018 Mexican elections looking face-to-face with another blunt-talking nationalistic populist, Andres Manuel Lopez Obrador, or Amlo as he is popularly known.

Lopez Obrador is the sixty-three-year-old founder of the leftist Moreana Party (the Movement for National Regeneration). He was a successful mayor of the nation’s capital, Mexico City (2000-2005), and has run for the presidency twice before (2006 and 2012). In 2006 he was only narrowly defeated.

Although the country’s two major parties, the centrist PRI (Institutionalized Revolutionary Party) and conservative PAN (National Action Party) have yet to select their candidates, Lopez Obrador is already campaigning across Mexico. His platform promises to clean up the country’s corruption, clear out the political establishment (who he calls the “Mafia of power”), provide better pensions to the elderly, create jobs and launch a massive new infrastructure program. Like Trump, Lopez Obrador promises to listen to the people and offers change from business as usual.

Mexico has a long tradition of populist leaders. In many regards, the Mexican Revolution was born of populist currents that sought to use the state’s resources to benefit the majority of the population, many of which were originally outside of the political system. Mexican populism also includes elements of nationalism, such as using Mexican capital and controlling national assets, and corporatism, which seeks to build up labor, farmer, middle class and even business associations and integrate them into the state.

One of Mexico’s most famous populists was Lazaro Cardenas, who fought in the revolution and went on to become president. In 1938 he nationalized the country’s oil industry, which had long-standing consequences as the oil company, Pemex, remains state-owned.

The ruling PRI forcefully moved away from populism during the 1980s as more market-oriented leaders assumed control in the midst of a major economic and debt crisis. The more technocratic faction that rose under the de la Madrid, Salinas de Gortari and Zedillo administrations reshaped the economy to make it more internationally competitive. However, the populist current remained in Mexican politics, with part of the PRI’s left wing splitting off in 1988 and rallying around Cardenas’ son, Cuauhtemoc Cardenas, who was only narrowly defeated at the polls for the presidency by the official PRI candidate, Carlos Salinas de Gortari. Lopez Obrador is clearly a part of Mexico’s populist tradition, in some respects a political heir to Cardenas.

Another important factor at work is that the current PRI government is discredited in the eyes of the public. President Enrique Pena Nieto, who began with considerable promise in December 2012, is now seen by many Mexicans as presiding over a corrupt, uncaring and inept government. While the first two years were good for Pena Nieto in that he introduced important economic reforms and reduced the body count associated with the country’s drug wars, the following period has been problematic. Economic growth struggled to remain above 2 percent, the oil industry hit a major slump in 2014 and only now is emerging and violence is again on the rise.

The government was also embarrassed by the escape of Mexico drug lord Joaquin “El Chapo” Guzman from a federal prison, the Ayotzinapa incident (the disappearance and murder of 43 student teachers), and a scandal that involved the president’s wife buying a $7 million mansion from a firm that won lucrative contracts with Pena Nieto’s government.

Another major reason for Lopez Obrador’s improved chances at the Mexican presidency is Trump. The U.S. leader’s comments during the presidential campaign were hardly complementary. In 2015 he stated, “When Mexico sends its people, they’re not sending their best…They’re sending people that have lots of problems, and they’re bringing those problems with us. They’re bringing drugs. They’re bringing crime. They’re rapists. And, some, I assume, are good people.” Such comments, together with the threat to build a wall along the border with Mexico and to redo the North American Free Trade Agreement (NAFTA), have done little to create a warm and friendly image of the U.S. president.

Trump’s surprise visit to Mexico in August 2016 did little to improve matters. In an effort to head off a possible economic shock from Trump’s proposals to build the border wall, impose steep tariffs on Mexican goods and renegotiate NAFTA, Pena Nieto invited Trump to Mexico. This was a disaster for the Mexican president as nothing positive for his country came out of the meeting, while Trump looked like more of a statesman for visiting a country hostile to him. The Mexican government still has not recovered in opinion polls from the visit.

The most recent reminders of Trump’s anti-Mexico stance came in early January, when the president-elect used Twitter to weigh in on the involvement of GM and Ford Motor in Mexico’s auto industry. Ford had earlier decided to build a $1.6 billion plant in Mexico. After a Trump tweet, Ford’s management backed down on that decision and announced that it was not going ahead in Mexico and would instead opt to make a $700 million investment in production facilities in Michigan. Trump also threatened Japan’s Toyota with a “big border tax” if it attempted to export its Corollas to the United States from a planned new plant in Mexico.

The loss of the potential investment from Ford and related jobs did not go over well in Mexico. However, it did prompt Pena Nieto to appoint former finance minister Luis Videgaray, the man who organized the botched Trump visit, as foreign minister, with a mandate “to accelerate dialogue and contacts so that from the first day the bases for building a constructive work relationship can be established.” Those last words came from the Mexican president, who has taken a concerned, yet measured response to the storm that appears to be heading his way.

As the campaign begins in earnest in the summer many Mexicans are likely to look to Lopez Obrador to represent them against Trump as his political campaign is likely to be one closely resembling “Mexico first.” Both men have similar personas in that they have confrontational styles, are ill-at-ease with globalization and possess dismissive attitudes vis-à-vis existing institutions (the establishment). It has been argued that Trump’s aggressive stance toward Mexico would make Mexicans more receptive to an anti-globalization and nationalistic candidate, even if they are not as far to the left as Lopez Obrador with some of his economic policies.

The mix of economic development issues and U.S.-Mexican relations does not come at a good time for the Mexican economy. The last several governments have implemented structural reforms that overhauled the economy, regained lost trade and investment from China and developed a more modern industrial sector. More recently, there are signs of improvements in productivity growth. Furthermore, trade openness, foreign direct investment, integration into global value chains and incentives to introduce innovative technologies have boosted selected activities, such as auto production.

It is against the backdrop of Mexico’s economic gains that the presidential race in 2018 will be fought. The Trump administration’s trade policies, which seek to keep jobs in the United States, threaten to take current and future jobs away from Mexico. While Trump was able to gain political followers in the U.S. “rust belt,” any Mexican politician capable of taking Mexico City will make the same promises of keeping jobs in Mexico.

While an updating of NAFTA is probably a good idea, such a task should be approached with a view as to how all three partners will benefit. A unilateral scrapping of NAFTA would certainly fuel animosity between the United States and its trade partners, and in Mexico give a boost to Lopez Obrador’s chances of putting a populist into the presidency for the first time in several decades.

The upcoming Mexican presidential election will be fought over economic reasons and putting “Mexico first” will be front and center. This has broader implications for relations with the rest of Latin America and the Caribbean; some countries might find that the new age of economic nationalism redounds to their benefit, but more forceful protectionist measures out of Washington, together with a tougher stance on immigration, are likely to embolden other nationalist and anti-U.S. movements throughout the region. The latter is not in the U.S. national interest, especially as it could see the loss of U.S. jobs and markets or the spread of more hard left alternatives to the struggling democracies that hold sway over the region. Depending on how U.S.-Mexican relations are handled, “America first” could well lead to a “Mexico first” home-made populism.