Mexico: The Venezuela Next Door? 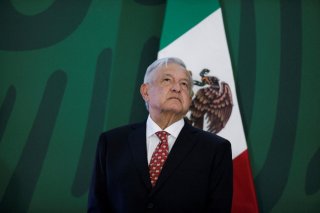 COULD MEXICO under the leadership of Andres Manuel Lopez Obrador plunge into the political and economic tailspin which we associate with Venezuela under Hugo Chávez, Nicaragua under Daniel Ortega, or Argentina under the Kirchners? Over three years into his six-year term, Lopez Obrador—universally known by his initials as AMLO—has displayed many similar statist and authoritarian instincts. But sufficient countervailing forces may exist so that Mexico avoids the worst, and with it, collateral damage to the United States.

U.S. INTEREST in Mexico is at best intermittent despite our lengthy shared border. Typically, one issue dominates the headlines. It varies from trade to narcotics to immigration—always in terms of its immediate impact on the United States. But relatively little sustained attention is given to the broader issue of Mexico’s overall political stability and the prospects for continued democratic governance.

Brief flurries of interest appear, usually in connection with electoral events, most recently in June 2021 when midterm races raised the question of whether AMLO would gain his desired two-thirds congressional majority, but not since the late 1970s and 1980s has Mexico been seen as a front-burner national security issue.

A 1979 article entitled “Mexico: The Iran Next Door?” by the right-wing academic Constantine Menges drew a parallel to the then-recent fall of the shah of Iran, suggesting that Mexico, another large, troubled U.S. ally, could go the same way. However, in this case, the scenario he envisioned was essentially a repetition—on a much larger scale—of the Sandinistas’ victory earlier that year over Anastasio Somoza in Nicaragua, even as a similar guerrilla triumph then seemed likely in neighboring El Salvador.

Menges took up positions in the Central Intelligence Agency and the National Security Council in the Reagan administration. As it pursued its policies of aggressive support for an anti-Sandinista insurgency in Nicaragua and a pro-government counter-insurgency campaign in El Salvador, there were occasional efforts to defend these policies with reference to a perceived threat to Mexico and by extension the U.S. southern border. President Ronald Reagan even asserted that it was only a two-day drive from revolutionary Managua to Harlingen, Texas.

Perceived instability in Mexico may not really have been key to the United States’ Central American effort, itself only one part of a global push against the Soviet Union which played out in other theaters such as Angola and Afghanistan. Nonetheless, the 1980s were indeed a time when Mexico’s prospects seemed questionable. The 1970s oil boom had enabled it to borrow and spend at will. This came to a sudden halt when the Federal Reserve Board hiked U.S. interest rates to tame inflation, leading to a severe financial and economic crunch in Mexico. After decades in power, the Institutional Revolutionary Party (PRI), termed “the perfect dictatorship” by Nobel Prize winner Mario Vargas Llosa, was becoming less able to contain political dissent. Corruption, always a significant problem, reached new dimensions, as officials found narcotics money a substitute for lost income siphoned from oil revenue.

Nonetheless, Mexico pulled itself together in the 1990s. First, PRI presidents Miguel de la Madrid and Carlos Salinas de Gortari eased Mexico away from a closed, statist economic model which was no longer workable. And the electoral system was permitted to function freely enough so that Vicente Fox, the first president from the conservative National Action Party (PAN), came to power in 2000. Fox, in turn, was succeeded by another PANista, Felipe Calderón. He was followed by the PRI’s Enrique Peña Nieto, marking genuine alternation in power, though with considerable continuity in policies.

Perhaps the most important step towards Mexico’s modernization occurred in 1994 when the North American Free Trade Agreement, negotiated during George H.W. Bush’s administration and ratified under Bill Clinton’s, came into effect. Although the merits of the agreement have been debated in the United States largely in terms of its domestic economic impact, it was also a work of enlightened statesmanship which did much to promote investment and modernize Mexico’s economy, as well as tying it to the United States and a free-market model.

However, over the following two decades, the unfinished business of political and economic development created a ticking time bomb of popular discontent. A new middle class emerged, especially in the cities of northern Mexico, where the benefits of U.S. and other foreign investments were felt. But millions remained mired in poverty. Despite significant U.S. assistance through the so-called “Merida Initiative,” the drug cartels increasingly became a power in the land, while day-to-day insecurity plagued those unable to shelter in gated communities. Although the holding of free and fair elections and the alternation of power between the PRI and the PAN was a genuine achievement, politics was perceived as an insider’s game, remote from the average citizen and plagued by corruption at all levels.

THE SITUATION was thus ripe for an “outsider” to take power. Over time, AMLO had established himself as the voice of those who felt left out in a changing Mexico. Originally a PRI politician in the southern state of Tabasco, he had split from it and gained the mayoralty of Mexico City under the banner of the Party of the Democratic Revolution (PRD), a leftist offshoot of the PRI. He ran as the PRD candidate for the presidency in 2006, losing narrowly, and again in 2012, losing by a wider margin. He ran a third time in 2018 as the candidate of the National Regeneration Movement (MORENA), essentially his personal vehicle. His victory, against weak candidates from the PAN, PRI, and PRD, has led Mexico into uncharted waters both politically and economically.

AMLO is now over halfway through his six-year term in office, long enough to allow us to make some judgments. Where he most obviously resembles Hugo Chávez is in his classically populist effort to govern through personal charisma, directly reaching the public so that it identifies emotionally with him. In this he has differed from his immediate predecessors from the PAN and PRI, who cloaked themselves in the prestige and formality of the presidency. Despite his lengthy political career, he has sought to present himself as an ordinary citizen. The accoutrements of his “man in the street” persona include remaining in his home in a middle-class Mexico City neighborhood instead of moving to “Los Pinos,” the presidential residence (which he opened to tours after assuming office).

His technique differs from that of Chávez, but with the same end of establishing an unmediated rapport with the voter. Chávez sold himself as the bluff, tough military man, clad in his uniform and red paratrooper’s beret, speaking the truths that the establishment dared not say. (Nicolás Maduro, who succeeded Chávez after his death, has tried to maintain a similar persona but utterly lacks Chávez’s charisma.) One element common to both AMLO and Chávez’s approach to politics is a seemingly infinite confidence in the leader’s ability to convince through the power of his words. AMLO has held (except for when he was ill with coronavirus) lengthy daily press conferences. Chávez held a weekly call-in show called “Hello President,” together with frequent, long Castro-style speeches which the networks were required to broadcast.

Fundamental to both AMLO and Chávez’s method of governing is a purely instrumental approach to democratic norms. When AMLO ran for the presidency in 2006, he initially enjoyed a large lead over the PAN’s Felipe Calderón. However, as the campaign advanced, voters grew nervous about his radical rhetoric and it progressively shrank. When on election day Calderón beat him by a razor-thin margin, AMLO cried “fraud” despite the fact that Mexico’s electoral authority and the court that supervised it had gained international respect after holding multiple presidential races which had been generally viewed as free and fair. Instead of accepting his loss, he proclaimed himself the “legitimate president” and sent his supporters to occupy the Paseo de la Reforma, downtown Mexico City’s principal artery, for two months. Mexico’s institutions, however, held, and Calderón assumed office.

Chávez, of course, began his political career in February 1992 with a failed coup d’etat in which he led a group of disgruntled officers in an effort to seize power from the unpopular Carlos Andres Perez. The attempt collapsed when they failed to secure the presidential palace and the main television station. A second coup attempt later that year, mounted by his followers while he was in prison, came closer but also failed. Six years after the failed coups, Chávez gained the presidency at the ballot box, just as AMLO gained it twelve years after trying to claim it on the streets of Mexico City.

LÓPEZ OBRADOR has shown a distinctly Chávez-like interest in reshaping his country’s institutions to weaken entities which can act as a brake on his power. It is true that he has gone nowhere as far as Chávez and his successor Maduro, who have taken over the state entirely, having completely colonized the electoral authorities, judicial system, and law enforcement agencies, as well as rewriting Venezuela’s constitution. AMLO has been more restrained, though it may be that this is more a feature of his relatively weaker position—he lacks the nearly unlimited financial resources that Chávez enjoyed when the global price of oil skyrocketed early in his term in office. And, while AMLO retains considerable personal popularity, his failure to achieve a two-thirds majority in Congress in this year’s midterms means that he will have to negotiate any constitutional changes with at least some of the opposition parties.