Michael Anton Lost the Faith of the Populist Right 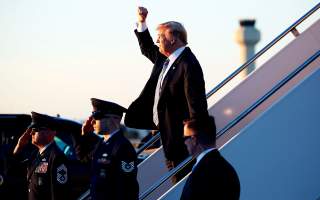 “Anton was a shill and don’t believe for a second he resigned out of principle,” an administration official told me Sunday night.

News broke Sunday night that Anton, a colorful former George W. Bush national security official and later corporate spokesman, was out. Within reporting circles, Anton was known as one of the most vociferous defenders of McMaster—and a principal leaker for his boss. When the National Interest was the first to report the Bolton candidacy in January, Anton denied it on Hugh Hewitt’s radio show. “Michael is one of the smartest and most talented individuals I’ve ever worked with—not to mention an amazing chef,” Sarah Sanders, White House spokeswoman, told Politico.

Sanders added that Anton was a “true friend” and the president has “nothing but good things to say” about him.

But the mood was markedly different among many of the president’s populist, nationalist supporters—ebullient on news of his exit.

A source close to the White House says that this was “100 percent” the work of new National Security Advisor John Bolton. “Bolton thought [Anton] was a major leaker and untrustworthy … Bolton thinks he’s a dirtbag.”

Anton could not be reached for comment for this story. He’s headed to the Kirby Center in Washington, part of Hillsdale College.

“I have known Michael for just about his entire adult life. His devotion to learning, his love of his country, and his talents of thinking, talking, and writing will make him a valuable colleague,” Hillsdale president Larry Arnn said.

"I will be forever grateful to President Trump for the opportunity to serve my country and implement his agenda,” Anton said.

Still, that knives are being thrown in the back of Anton as he leaves the building is striking. It represents a precipitous decline in esteem for one of the new Right’s most prolific thinkers—once co-editor of the Journal for American Greatness (JAG), a brief online sensation in the 2016 campaign, and the author (with a pen name) of “The Flight 93 Election,” a famous article in favor of Trump.

The article was published by the Claremont Institute, “Trump’s brains” as Jacob Heilbrunn, editor of the National Interest, expanded upon in The New York Review of Books last fall.

But a source familiar with the matter told me Claremont didn’t even originally want to publish the article—or at least hesitated. Others on the populist Right attack Anton for using a pen name (Publius), while others put themselves on the line for Donald Trump: Anton left an exit in case Trump lost (which seemed likely).

My White House source dismissed him as “Bush, [Rudy] Giuliani speechwriter” and complained that the idea of him “as an intellectual” was “overblown.”

Anton has an opportunity now, of course, to rebut such criticism and return to the written word.

He remains on the masthead of American Greatness, a post-JAG project.

Another JAG writer, Julius Krein, founded his own magazine, American Affairs. “It was actually inspired by JAG, but no formal connection, though Anton wrote for it between JAG and the administration,” Krein told me. “It’s more Claremont influenced and focused, for sure [than American Affairs]. They are looking to be a competitor with National Review, etc. Different goal than American Affairs.”

Might we see the return of Publius Decius Mus?