In the Middle East, the EU Must Look Beyond Hard Security 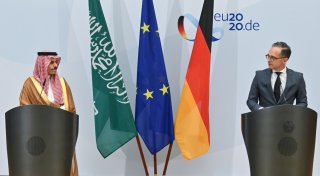 After months of deliberation, the Council of the European Union (EU) approved the EU’s strategic partnership with the Gulf Cooperation Council (GCC) and its member states on June 20, 2022. This strategy encompasses six partnership components: trade and investment; green transition and sustainable energy security; regional stability and global security; global humanitarian and development; people-to-people connectivity; and more vital EU-GCC institutional linkage. Much has been said and written by practitioners and pundits about the depth and scope of this strategic partnership. Whereas the seemingly U.S. retrenchment from the wider Middle East rejuvenates the advocates of European involvement in the regional portfolios, some voices cautiously hint at European structural and functional constraints.

Before the Russian invasion of Ukraine, there was a consensus in the academic and think tank communities that the EU-GCC relationship has been suffering three cardinal predicaments which were calling the aspiration for strategic partnership into question. Silvia Colombo from Italy’s Istituto Affari Internazionali (IAI) summarizes these very inter-regional struggles in her chapter contribution to a recently published edited volume: “prevailing bilateralism in EU-GCC cooperation; the strong bias in favor of economic issues; and the almost complete neglect of people-to-people mutual knowledge and exchanges.” The core logic behind these struggles is the different perceptions and expectations the EU and the GCC mutually possess. As the Gulf monarchies have long believed, a lack of united foreign and security policies on the European side has prevented the EU from deepening its economic integration with the GCC and extending its spillover effect to other policy areas. Under these circumstances, the GCC and EU member states have decided to pursue bilateral state-to-state relationships. The newly released strategic partnership document aims to clear up these struggles and gives a new boost to inter-regional engagement.

Although the triple struggles have been embedded in the EU-GCC relationship to the extent that an eighteen-page strategic partnership document cannot quickly dilute them, the Ukraine war demonstrates how the GCC, and its member states read the developments differently. Five months into the war, the oil-rich Gulf states, for one, rebuffed the West’s request to lower oil prices by pumping more oil to the global market, and President Joe Biden’s recent visit to Saudi Arabia seemingly failed to secure a new oil output deal with the GCC states. In addition, the GCC states have not only refused to denounce Russia’s act of aggression but also hosted the Russian foreign minister at the fifth GCC-Russia joint ministerial meeting for strategic dialogue in Riyadh on June 1, 2022. Surprisingly, EU senior leaders have not yet paid a visit to the Gulf states for talks over the oil production increase as the energy supply has turned into an Achilles’ heel for Europeans. Although a couple of EU member states, namely Germany and France, rushed to the Gulf monarchies to explore ways to increase energy imports, the European Commission president’s visit to Israel in mid-June and Azerbaijan early this week to offset a fraction of Russia’s gas supply to Europe reveals the prevalence of bilateralism (state-to-state relations) and most importantly, much work, rather than words, are needed to transform the structure and substance of the EU-GCC relationship.

The EU’s aspiration for a strategic partnership with the Gulf countries should be construed as a timely uplift for the inter-regional relationship. As the document indicates, “Together, the EU and the GCC represent 20% of the global economy, 17.5% of global trade, and cover more than half of global foreign direct investments. In 2020, the EU was the GCC’s largest import and fourth-largest export partner.” Moreover, the Gulf countries’ quest for power and influence beyond their neighborhood has made them a party to negotiation tables over the conflicts with European security and interests being at stake. A new wave of rapprochement between Israel and some Gulf monarchies under the Abraham Accords also partially assures Europeans of more security for its ally Israel, de-escalation across the region, and new momentum for regional development and prosperity. Thus, the dominance of EU member states’ engagement with the Gulf monarchies over the EU institutional relationship with the GCC and its member states is a wise strategy to which Europe should remain committed. However, a snubbed avenue exists for solidifying the EU-GCC partnership.

Since 2019 when the new cabinet assumes power at the European Commission, the EU’s incoming leaders have started articulating features of a geopolitical Europe. Whereas the Russo-Ukrainian War has pushed the EU and its member states to flex their muscles and speak the language of power, the European security provider aspiration has yet to be realized in other parts of the world, particularly in the Persian Gulf. This, however, does not mean the EU was numb to the security challenges in its neighborhood and beyond. Notwithstanding the limits within the EU Common Security and Defence Policy, there are eighteen ongoing EU-mandated missions and operations, of which eleven are civilian and seven military, as of today, with tasks ranging from conflict prevention and peacekeeping, crisis management, joint disarmament operations, and military advice and assistance tasks to humanitarian and rescue and post-conflict stabilization tasks. Since the mid-2000s, the EU has also been actively involved in the talks over Iran’s nuclear program, which is directly related to nuclear non-proliferation. Despite these ongoing efforts and measures, the EU lacks the capability and capacity to be a security provider worldwide.

Nevertheless, along its quest for being a geopolitical power, the EU is well-prepared to invest its forces and resources in soft insecurities that put people’s lives and states’ stability in peril. Given the deteriorating ecosystem of the GCC states and their peripheries, the region is facing climate disaster, fierce dust storms, and critical water scarcity. For the latter, for instance, as the water in the Persian Gulf may soon reach “peak salt” which would make desalination infeasible, the GCC states, namely the UAE, Kuwait, and Qatar, are relying on desalination for more than 90 percent of their water supply. In the meantime, most GCC states have only a few days’ worth of drinking water stored at any given time due to the high demand for water coupled with low levels of naturally occurring groundwater and infrequent rainfall. Dust storms in the Gulf states and the Middle East have also very recently gained traction. For instance, Saudi Arabia’s capital Riyadh had more than thirty-five days of dust storms in the first four months of 2022, while the highest number of days with dust storms in the past four years was forty-eight days in 2019. The United Nations estimates that dust storms cost the region’s economy $13 billion a year. These tip-of-iceberg ecological crises across the GCC states require science, expertise, norm-setting, and best practices to get alleviated. Since these looming catastrophes endanger the security of people and states alike, the EU is apt and indeed needs to be involved. By all accounts, the human and state insecurities arising from the broader climate crisis face Europe with direct threats, including a new influx of migrants amid the ongoing war in Ukraine and its humanitarian implications for the European states. Even though the EU may not face climate migration from the GCC countries, given their affluent life conditions, which enable Arabs in Gulf monarchies to relocate conveniently, the very mass climate migrants struggle would arise from other Middle Eastern countries.

Beyond this apparent predicament, insufficient environmental resources have recently started displacing Middle Eastern people internally. Given the ethnic and tribal structures of the Gulf and Middle Eastern states, internal skirmishes and armed conflicts are on the horizon. This looming scenario is detrimental to states’ stability. Indications such as the EU document on strategic partnership with the GCC states and Biden’s recent visit to Saudi Arabia allude to the fact that the American and European policies in the Middle East and Gulf region privilege order over other goals. Since order is intertwined with an acceptable level of stability within the states, the climate disaster can destabilize the sociopolitical establishment by triggering climate-induced domestic conflicts. Deadly protests in Iran (2021) and Iraq (2019) over water shortages and the highly likely continuation of similar protests over there and their ramifications to other countries this year prove that states’ stability and, accordingly, the European interests are at stake.

The EU’s involvement in alleviating these non-military threats to the nations and governments in the Gulf region and beyond require redefinition and reconceptualization of “security” in the EU’s mindset and its incorporation into its agenda, such as the one the EU-GCC strategic partnership has stipulated. Whereas the Russo-Ukrainian War alludes to the existence of hard insecurity that Europe should confront and respond, the soft insecurity that is prevalent in different parts of the world, including the Persian Gulf, necessitate the EU’s mobilization of forces and resources to collaborate with the Gulf states for climate crises in this region and beyond. The EU’s providing security by addressing non-military threats and soft insecurities would not only give credit to the EU on the global stage but also boost its image before the people whose lives are at stake. Although there is no recent public opinion survey on the EU’s popularity in the Gulf region and the Arab World in general, the latest edition of the Arab Youth Survey conducted 3,400 face-to-face interviews among Arab youth across seventeen states in the Middle East and North Africa, for instance, reveals that 70 percent of the respondents consider “France” an ally to their country, above the United States but below China and Russia.