In the Middle East the Russians Aren’t Coming: They Are Back 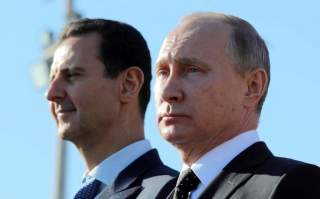 Four decades after the United States largely succeeded in sidelining the Soviet Union in the Middle East and becoming the leading regional, Russia is resurrecting its long-lost standing. The process of partial American disengagement from the region that began under President Barack Obama has further increased under President Donald Trump. Indeed, if things continue as is, Russia may soon supplant the United States.

Russia’s growing influence is manifest across the region, from Morocco to Iran. This remarkable turnabout, part of Vladimir Putin’s overarching strategy of restoring Russia’s standing as a great power, has been the result of deft diplomacy combined with a willingness to sell arms and nuclear power reactors to all askers.

While international attention has been focused on the Iranian nuclear program, Russia has been playing an increasingly important role in two other dangerous trends underway in the region: a massive conventional arms race—$1.3 trillion of arms bought by the Gulf states alone between 2000 and 2014—and a dramatic push to procure nuclear power reactors. All of the reactor programs reflect legitimate energy needs, but “civil” nuclear programs in the Middle East have a nasty tendency to morph into military ones.

U.S. allies in the region today have become hesitant to continue placing all of their strategic faith and security in American hands. While they uniformly welcome President Trump’s more hardline approach, the scars of American weakness during the Obama years, as they perceive it, have yet to heal. Moreover, Trump’s unique character has engendered ongoing doubts regarding American trustworthiness. For the meantime, U.S. allies are hedging their bets.

Egypt’s anger over what it viewed as insufficient American support for the Mubarak regime, and subsequent sanctions on arms sales, led to a significant improvement in its relations with Russia. A deal for four Russian nuclear power reactors was concluded in 2017. Military ties have been restored, including the sale of some dozens of advanced fighters, attack helicopters and S-300 missiles, along with new joint military exercises.

Egypt has been the linchpin of American policy in the region ever since it evicted the Soviets in the early 1970s. In so doing, it created the basis for the three mutually reinforcing pillars of U.S. Middle East policy to this day: the establishment of a moderate, pro-American Arab camp with Egypt and Saudi Arabia at its center; countering regional rogues such as Iraq, Iran and Libya with the moderates’ support; and the promotion of Arab-Israeli peace—again, with moderate support. An Egyptian-Russian rapprochement constitutes a severe blow to American standing.

For decades, an unwritten deal has governed U.S.-Saudi relations; security for an assured supply of oil. In 1991, the United States even went to war in defense of Saudi Arabia. Today, however, the Saudis are skittish. In 2017, King Salman bin Abdulaziz Al Saud conducted the first ever visit of a Saudi monarch to Russia. A deal was signed for highly advanced S-400 and anti-tank missiles. A nuclear cooperation agreement was also signed, and Russia hopes to provide at least two of the planned sixteen Saudi reactors. Russia and Saudi Arabia—who together make up approximately 20 percent of international oil production—have also coordinated policy to raise the global price.

Russia’s minimalistic military intervention in Syria, with just two fighter squadrons, has been remarkably successful, saving the Assad regime at virtually no cost to Russia, which left the bloody ground fighting to Iran and Hezbollah. Obama’s self-enervating prognosis that Syria would become Russia’s Vietnam has been proven baseless.

Russia has become the primary player in Syria today, ensuring its long-term presence there with a Syrian commitment to grant it air and naval bases—from which it projects region-wide power—for forty-nine more years. A country of little importance in and of itself to the United States, Syria has become the focal point of the most critical regional issues, including the Sunni-Shiite confrontation, the war against ISIS, Iranian expansionism, and a possible Iranian-Israeli conflict. Russia’s position in Syria provides it with influence over all.

The U.S. withdrawal from the Iran nuclear deal has driven Tehran even closer to Russia, its longtime ally. Iran is counting on Russia to help defeat the American sanctions regime and prevent any possibility of military action against it. Russia has already supplied Iran with S-300 missiles, and sales of fighter aircraft, tanks and artillery once Security Council mandated limitations expire have been mooted. Russia provided Iran with its sole nuclear reactor, and may sell a few more.

Turkey, for decades a virulently anti-Russian NATO ally, has been cozying up to Moscow and appears to be going ahead with the purchase of S-400 missiles over the vehement protests of its NATO allies. Morocco, Bahrain and Qatar are also interested in the S-400. Russia signed a large arms deal with the UAE and is exploring the possibility of gaining access to naval bases in Libya. A nuclear cooperation agreement was signed with Tunisia.

Russia has also offered Lebanon a large arms deal and is interested in air and naval bases there too. Russia has cooperated overtly with Hezbollah in the fighting in Syria, and Hezbollah itself now has Russian arms, presumably supplied indirectly by Syria and/or Iran “without Russian knowledge.”

Concomitantly, Russia has also succeeded in developing an increasingly close relationship with Israel. U.S. disengagement from Syria and its withdrawal from the nuclear deal have had the practical effect of making Russia a critical player for Israel. The prospects of an Israeli conflict with Iran/Hezbollah in Syria, or with Iran over its nuclear program, hinge significantly on the role played by Russia. Premier Benjamin Netanyahu has now visited Putin in Moscow ten times in the last two years alone.

The diplomatic world, much like nature, abhors a vacuum, and Russia has rushed to fill the void left by the United States. A restoration of American primacy is possible, and would be welcomed by allies, but would require three important changes in U.S. policy.

First, that the United States finally develop a strategy for Syria. Certainly a hard call, but as Russia has proven, the United States could be playing a far more effective role without risking major involvement. Second, the adoption of a coherent U.S. policy towards Iran. Not just a capricious withdrawal from the nuclear agreement, followed by the enunciation of welcome but unrealistic objectives, without preparing any policy options other than sanctions, or anything that appears like a plan B—or even a plan A. Finally, maintaining the close alliance with Israel, but also either pursuing an all-out attempt to reach a breakthrough with the Palestinians, or a decision to make do with conflict management in a way that does not further inflame matters.

Unfortunately, the prospects of any of this happening under Trump are low. In the Middle East, the Russians are back—and likely to stay.

Check Freilich is a senior fellow at Harvard’s Belfer Center and is a former deputy national security adviser in Israel. He is also the author of Israeli National Security: a New Strategy for an Era of Change, Oxford University Press, 2018.