The Midterms Prove Only One Thing: Trump Owns the GOP 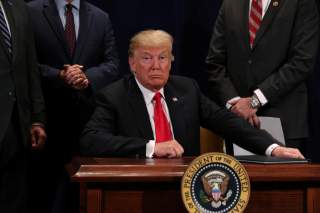 Tuesday’s midterm election marked the end of Paul Ryan’s Republican Party and the consolidation of President Donald Trump’s rule on the American political right. For Republicans to be embarrassed into repudiating Trump, they would have had to suffer a blowout defeat in the House of Representatives of at least the sixty-three-seat magnitude that Barack Obama’s party suffered in 2010. They would have had to lose control of the Senate, too. Instead, the GOP did well enough that the losses cannot be called abnormal; they’re in the same ballpark as the number of House seats lost under President Reagan in 1982. (Twenty-six seats then and twenty-six seats as of the morning after this year’s midterms—though votes are still being counted and totals may shift.)

Speaker Ryan gave up long before the election and announced he would retire whatever its outcome. Ryan was by no means the worst of the Great Republican Hopes of the last decade. But his dream for the country was a sterile one, of optimized tax rates and well-structured incentives that would produce the right outcomes for rich and poor alike. Hard questions about foreign policy or immigration did not seem to interest him, and if his views were at all more realistic or conservative than those of George W. Bush or Mitt Romney, then he did little to act on them. “America First” as a program for restricting immigration and fighting fewer wars was not on the agenda of Paul Ryan’s Republican Party.

Donald Trump ran as the anti-Ryan in 2016. His economic views were inconsistent or messily articulated, tolerant of old-fashioned entitlements, and notably protectionist. Instead of backgrounding war and immigration, he put them at the forefront of his campaign. And of course, he won, both his party’s presidential nomination and the presidency itself. Today’s Republican Party is personally loyal to Trump—at least at the grassroots level—but is only half-evolved. It is becoming Trumpian, but it has yet to shed its old Ryan-like habits. The midterm results will accelerate its transformation. Now Ryan himself is gone, Republicans are in opposition in the House, and the next GOP majority will look quite different from the one that made Ryan its Speaker.

The GOP’s metamorphosis is necessarily a process of “creative destruction,” a concept Ryan would endorse in other contexts. Trump’s GOP is still a party of tax cuts and reduced regulation, but it’s not a party that defines itself by a fiscal program. What a new program will look like largely remains to be seen, however. So for now, Republican congressmen have only the old landmarks by which to navigate, and when candidates like Pennsylvania’s Lou Barletta or Virginia’s Corey Stewart try to employ Trump’s themes, they fail. The alchemy that turned dross into gold for Donald Trump required not just hard-right rhetoric about immigration but appeals to American workers and a war-weary public as well. What Republicans in 2018 often produced instead was an amalgam of one Trump theme or another (most often immigration) combined with standard Republican boilerplate that might have been used in any conservative campaign past. Perhaps a fully Trumpified and policy-articulate GOP would not have kept control of the House either, but it at least would have provided voters with a novel choice. As it was, the ballot booth too often gave voters a choice between a standard-issue Republican congressman and an anti-Trump Democrat, often of an exotic new—or rather revived—breed of socialist.

Pulling the party away from Trump and back toward Ryan, and ultimately the Bushes, will be one of Tuesday night’s winners: Mitt Romney, senator-elect from Utah. Trump lost his harshest Republican critic when John McCain died. Romney has no regard for Trump or Trumpism, and he has the potential to be a younger, more dangerous critic than the ailing McCain was. The president has been fortunate in his party’s Senate success, however, which give him enough of a majority that Romney cannot single-handedly shift the party’s philosophy back toward technocratic centrism. But he will be a constant force in that direction.

The Democratic House will be both a scourge and an opportunity for President Trump. Its investigations into his tax returns and every other aspect of his life and his administration will be a nuisance. But from a political perspective, Trump will be glad to have an opponent in the form of a Democratic speaker, preferably Nancy Pelosi. The president thrives on personalizing politics, and in Pelosi he will have an opponent as convenient as Hillary Clinton was. Having the House may prove to be a mixed blessing for Democrats, who will be subject to many policy and personality stresses in the run-up to the 2020 election. The Democratic nominating contests is set to begin almost immediately, and it may involve policy visions of such differences that a Democratic House cannot adequately reflect any of them. It’s a recipe for angst and disappointment among the Democrats.

Beto O’Rourke may have fallen short in his campaign to take Ted Cruz’s Senate seat away, but he has developed a national following in the media, which will serve him well if he seeks his party’s 2020 nomination. Can a candidate who lost to Cruz really have a shot on the national stage against Trump? He came within three points of victory in Texas. His admirers may believe that if he could come so close to unseating Cruz, even among Texans, then it’s possible he could do much better with a national electorate. But it is not as if the other half-dozen top prospects for the nomination will set aside willingly. O’Rourke would not, in such a contest, be the golden boy who might slay the vampire Cruz. He would instead be a Texas Democrat trying to maintain his image as a bright young thing of the left even as candidates with greater left-wing credentials or the socialist or identity-politics sort worked to bring him down.

The Democrats will find 2020 to be much harder than 2018. This is their zenith. They are not yet confronted with the difficulty of finding a candidate both left enough for the party’s activists and likeable enough for ordinary voters, but soon they will be. They are due for a few rounds of creative destruction of their own.

Donald Trump has reason to celebrate. The loss of the House will make his life harder than he might yet imagine. Republican success in the Senate, however, in defiance of historical precedent, shows that even a half-evolved GOP can win against tough odds. Trump may not need a fully evolved party to win the White House again in two years’ time. But if the GOP is to have a winning future after Trump, then it will need to complete its reformation. That may require talents beyond those to be found among the Republicans who remain in the House and those who are about to be added to the Senate. But whether in victory or defeat, in 2020 or 2018, the Republican Party is continuing to mutate away from the form it possessed when Paul Ryan was its future. It is taking on a new shape guided by President Trump.