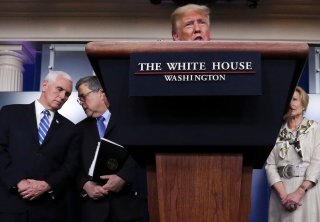 No one with any sense of history would ever compare Vice President Michael Pence with Dwight Eisenhower. Which makes sense: Pence is a trained lawyer and lifelong politician astutely tuned to Indiana’s deep red (and nearly paleolithic) convictions, while Eisenhower was a West Pointer and career military officer who led an alliance that defeated fascism. Pence is a former radio talk show host, Tea Party conservative and born again Christian, while Eisenhower was a middle-of-the-road Republican and—despite his strict Mennonite upbringing—a religious skeptic who only hesitantly, and late in life (at the age of sixty-three), became a Presbyterian.

Perhaps as crucially, comparing the two not only contradicts everything we know of the personalities and talents of Michael Richard Pence and Dwight David Eisenhower, it sends eminent historians scrambling for their intellectual exits. Mike and Ike not only have different backgrounds and experiences, but they’re also not even in the same phylum—this isn’t apples and oranges, historians sniff, it’s birds and mammals. Pence serves as the soft-as-a-pillow number two to a screeching and bleeding eagle, while Ike was a healthy wildebeest, snorting his way to the head of the herd. The former is a beak-open fledgling, the latter was a national icon.

And yet Mike Pence and Dwight Eisenhower have a singular, and indispensable, talent in common: both know how to talk to the press. Eisenhower’s abilities were legion and are a celebrated part of his iconography. Eisenhower’s rhetoric was anything but soaring. Quite the opposite: he was terrible. His press conference performances were so bad that they became the butt of journalism jokes. Ike’s pronouncements were riddled with puzzling turns of phrase, his explanation of administration thinking befuddled and opaque, his murder of English syntax a punchline in the political commentary (“The only thing I know about war,” he once said, “was two things”). There was never a shortage of examples: Eisenhower gave 193 press conferences in his eight years as president—a record that has stood for sixty years.

But there are those who argue that while Ike was terrible during press conferences, he was also brilliant. Ike was the anti-Trump; he rarely (and never inadvertently) told a lie, tiresomely provided exhaustive but incomplete information, never bragged or blamed, never publicly insulted a reporter—and rarely delved into the details of public policy. His press conferences were paeans to his most fundamental belief: that no information is far better than bad information. His goal was to practice political theater, his press conferences a kind of performance art expressing (in turn) calm demeanor, serious concern, barely concealed irritability and quiet reassurance. Through all of it, the press never really knew what Eisenhower was thinking: which was the whole point. Eisenhower’s gift was to not say anything at all, and in as many words as possible.

As Evan Thomas, a historian and journalist, explains in his book, Ike’s Bluff, that Eisenhower’s aides worried incessantly about what he would tell the press in times of crisis. He needed to be briefed more thoroughly on what he would say, they suggested, while touching on details that would enhance his credibility. The United States was in the middle of the Cold War, they needlessly reminded him, and a misstep could be costly. In 1955, during the Formosa Crisis (when China threatened to invade Taiwan), Eisenhower press secretary James Hagerty warned Ike that he needed to rehearse his answers to questions about the crisis, including the most important one of whether the U.S. was prepared to go to war. Eisenhower waved him away: “Don’t worry Jim,” Ike said, “if the question comes up I’ll just confuse them.” And so he did, going on and on without saying much of anything at all, what Thomas describes as “a classic of obfuscation.”

Mike Pence has that same indispensable talent, honed through years of political experience. Like Eisenhower, Pence goes on and on without really answering the question he’s asked. At the same moment, he expertly provides a deft ability to convince us that he’s the most capable and informed policymaker in Washington, even when (manifestly) he’s not. Like Eisenhower, who met the press weekly, Pence’s talent is regularly tested—through his appearances at the now almost daily press briefings on the coronavirus.

Pence has met the challenge, his abilities displayed during the coronavirus press briefing this last Saturday, when (with Trump’s exit), he expertly navigated the mines the press buried for him. Known for his pandering to the president, Pence is not above doing so with reporters. When asked whether the administration would provide guidance on prospective educational closings, Pence was nearly fulsome. “Well, it’s a terrific question,” he said, and then went on to talk about the importance of standardized testing—which was not an answer, of course, but good enough for reporters. A second question (from the same reporter) was more pointed.

Did Dr. Anthony Fauci, the Director of the National Institute of Allergies and Infectious Diseases or the Surgeon General (both of them standing behind Pence) have anything to say about President Trump’s controversial claim that a combination of “two certain medications” [hydroxychloroquine and azithromycin] “have a real chance to become one of the real game-changers in the history of medicine?” Should Americans be taking medical advice from the president? Pence might have deferred to Fauci, but instead held forth for a full, and somnolent, three minutes on: “our great pharmaceutical companies,” the possibility of finding a coronavirus vaccine “going forward,” the “off label use” of certain drugs that may provide relief from virus symptoms, the importance of federal-state cooperation and the “hopefulness” that Trump feels about “these time-honored and tested” (and “compassionate”) medicines. That is to say, Pence’s answer was an Ike-like masterpiece of garbled syntax, incoherent comparisons and earnest obfuscation; he said a whole-hell-of-a-lot without saying anything at all.

This highlights why Trump may well have given Pence the role of being the administration’s coronavirus czar in the first place—a decision that brought derisive hoots from both progressives and a handful of quietly skeptical Republicans. “Mike Pence literally does not believe in science,” Rep. Alexandra Ocasio-Cortez (D-N.Y.) intoned. “It is utterly irresponsible to put him in charge of U.S. coronavirus response.” Perhaps. But Trump didn’t appoint Pence, a self-described “evangelical Catholic, because the Vice President believes in science, he appointed him because he’s underrated, unsophisticated and thoroughly boring. Which, when compared to Trump, is exactly what America needs. Put more simply, Trump screwed up in reverse: he actually got something right. Like Ike, Mike understands that Americans don’t want to hear the bad news and it’s his job to make sure they don’t get it.

Mark Perry is a contributing editor at The American Conservative and an author whose books include Partners In Command and The Most Dangerous Man In America. Follow him on Twitter @markperrydc