Is Mike Pence for President in 2024 Still a Go? 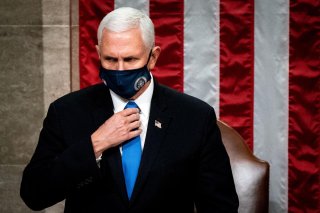 After an uproarious attack on the U.S. Capitol last week, Vice President Mike Pence split from his commander-in-chief and quickly condemned the mob-like behavior from pro-Trump supporters—leadership that was tested as President Donald Trump initially hesitated to act.

Pence has exercised “unflinching loyalty” towards Trump up until this point, as the president blasted Pence’s constitutional duty in certifying the electoral college results. Trump and his close allies attempted to push his political partner to reject the vote based on baseless claims of voter fraud, but Pence firmly denied the request and proceeded with his authority over the Senate—a job that was abruptly disrupted with dangerous protestors on Wednesday.

The vice president is reportedly “very upset” that Trump didn’t exert more effort in squashing the torpedo that rumbled the Capitol, a source told NBC News, since some protestors voiced support for Pence’s execution.

But as Trump was reluctant to act during Wednesday’s events, Pence took to Twitter to criticize the violence and told people involved to “immediately leave the building.” Pence also led in making the decision to call on the National Guard last week to help tame the disorder at the Capitol, urging members to “move faster than they were,” a decision that the president apparently resisted doing.

And following the deadly siege, the vice president spoke with the family of Brian Sicknick, the Capitol Police officer who died from injuries drawn on by the brutal protestors. The president, according to NBC, still hasn’t reached out to Sicknick’s family about the loss.

Pence’s actions since the Capitol assault have resurfaced speculations of his 2024 White House bid, as his management during the episode was largely different from Trump’s hesitant approach. But despite the president’s mismanagement of the attacks, experts say Pence still has a lot of political hurdles to overcome before positioning himself as a leading contender for the 2024 GOP presidential candidacy.

“Pence’s service as vice president elevated him as a prospective presidential candidate, but I suspect he would have encountered difficulties in 2024 even if Trump had not turned on Pence for following the law,” Joel Goldstein, a vice presidential expert and professor of law emeritus at Saint Louis University School of Law, said, referring to the vice president presiding over the electoral count. “Republicans surely would have chastised Pence during the primaries for the administration's mishandling of the Covid-19. Although other Republicans were complicit in the failure, Pence chaired the task force where his actions were apparently complicated by Trump's singular focus on minimizing perceptions of the pandemic to aid his re-election rather than attacking effectively the pandemic. Pence’s identification with the effort would probably have hurt him in any event as would the perception that he had been too servile in his effusive praise of Trump.”

Likely the downfall of the Trump administration’s re-election, Pence served as head of the White House coronavirus task force, an effort that let the infection numbers reach unseen case and hospitalization levels. With the vice president’s involvement in the force, the pandemic will expectedly be viewed as an area of weakness for other contenders to charge.

Pence will also likely be criticized for his devoted ties to Trump and the administration if the other GOP candidates break away from “Trumpism.”

Although Trump’s handling of the Capitol assault has lawmakers from both sides of the aisle angry and calling on Pence to remove the president from office for his involvement in inciting the violence, it’s important to note that he still has sizable influence over the GOP. Trump received more than seventy-four million votes in the presidential election—the second-highest a candidate has ever received after President-elect Joe Biden with eighty-one million—and has his supporters convinced that the election was “stolen” because of false claims of voter fraud. And by Pence certifying the electoral votes, “his action appears to have damaged him with Trump's supporters who he probably had looked to as part of his base in 2024 while winning some respect from some Republican officeholders,” according to Goldstein.

Trump has also teased of running for president again in 2024, adding to the pool of several presidents who have attempted to win a nonconsecutive White House term, but only one was successful: former President Grover Cleveland.

While pressure intensifies for Pence to invoke the 25th Amendment to withdraw Trump from office during the administration’s eight days left on the job, Russell Muirhead, a political science professor at Dartmouth College and Democratic member of the New Hampshire House of Representatives, said Pence’s “best thing to do is the right thing to do,” as “no one can know what will help or hurt his presidential run four years from now.”

“He should do the ethical, right thing—and show himself to be worthy regardless of whether his future campaigns succeed,” Muirhead added. “Concretely, Pence needs to inform Republican voters that there was no conspiracy to steal the election of 2020. The president has betrayed his supporters by lying to them, over and again, about the election. Vice President Pence has the chance to do what the president cannot imagine doing: tell the truth about the election.”

With roughly a week left of his term as vice president, Pence is expected to consume a regular schedule, attending events and speeches tailored to illuminating his own work, amid pressure in deciding whether to highlight the administration’s successes over the last four years or back the notion to use the 25th Amendment.

“I imagine that Pence simply wants to avoid further controversy while doing what he can to prevent Trump from engaging in more incendiary and reckless behavior,” Goldstein said. “Pence and others in the administration have an obligation to do what they can to restrain Trump’s behavior which has been inconsistent with his presidential oath.”

Pence is expected to “run out the clock” until inauguration day, as reported by NBC, to avoid any future reckless turmoil from pro-Trump supporters.