The Missed Opportunity of the June NATO Summit 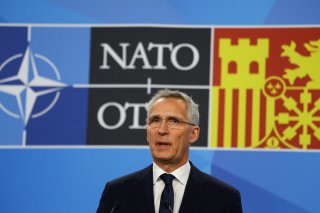 Russia’s five-month-old war in Ukraine has given NATO a reinvigorated sense of purpose, illustrated most visibly during its summit meeting last week. The alliance rolled out several initiatives to enhance deterrence on its eastern flank, formally began the process of admitting Finland and Sweden as member states, and published its first Strategic Concept document in over a decade. NATO secretary-general Jens Stoltenberg lauded the gathering as a demonstration of the alliance’s “unity and resolve,” while President Joe Biden declared it as “history-making.”

But beneath the photo sessions and flowery public remarks lie a more disconcerting reality. Indeed, the self-congratulatory praise is deceiving. Last week’s summit was indeed historic in that it occurred at a time when large-scale war had returned to Europe. Yet the results of the conclave were vague and aspirational, to put it generously. NATO’s eleven-page Strategic Concept was suffused with language about the alliance’s unity of purpose and shared democratic values. Missing, however, was any detail about how NATO intends to achieve its new missions, whether the necessary resources can be mobilized, and what additional spending and deployment commitments its members have committed to.

One of NATO’s greatest strengths is that it is a pact among thirty democracies—thirty-two once Finland and Sweden formally join. But that strength also happens to be one its principal weaknesses. Final decisions on policies, procedures, and force structure require unanimity—something that’s devilishly difficult in so large a coalition in part because the leaders of member states must win support at home for the commitments they make on the sensitive issues of national security and spending. Consequently, universal agreement is obtained the easy way: by seeking the lowest common denominator, which means paeans to shared values and ambiguity on specifics.

To the extent NATO’s new Strategic Concept mentions commitments at all, they are couched in elastic language devoid of benchmarks specifying what members will do, how much they will spend to do it, and when. In short, the Strategic Concept is neither a strategy nor a concept but rather stirring verbiage about NATO’s future aspirations. This isn’t surprising. It’s far easier to wax philosophically about defending the “rules-based international order” than to present a detailed plan, containing clear commitments, for achieving that goal. The former is a relatively easy, symbolic exercise, the latter a recipe for starting arguments within the NATO family.

Nowhere is this values-heavy approach more evident than in NATO’s goal of increasing its Response Force (RF) to 300,000—more than seven times its present size. Creating a force this large and ensuring it has the funds, personnel, weaponry, and logistics needed to deploy, and possibly to fight, in short order is a bold step.

Yet the Strategic Concept makes no mention of the Response Force (RF), let alone the increase in its size, an odd omission considering that the alliance describes Russia as “the most significant and direct threat” to the Euro-Atlantic area. Worse, when Stoltenberg mentioned the plan for a bigger, more muscular RF, some NATO member states were apparently blindsided. Critical details were left unanswered. Which NATO countries will be contributing forces to the scheme? Will the troops be based in Eastern Europe or be placed on standby in their home countries? As a consequence, this initiative risks becoming a public relations exercise at a time when Europe and the United States are facing a future of high inflation and slower growth.

The document devotes considerable space to spelling out the threat Russia poses to Europe’s security and stability, including Moscow’s use of force against its neighbors and its determination to establish a sphere of influence. So it’s a mystery why NATO, only nine of whose members have met the 2014 Wales Summit’s “guidelines” to devote 2 percent of national GDP to defense spending and 20 percent of national their military budgets to armaments, is now committed to thwarting the challenge from China, a far more formidable opponent than Russia and one located 4,000 miles away from the alliance’s European remit. The embrace of this new ambition is all the more surprising, even mysterious, when Europe’s deadliest war in nearly eighty years appears likely to last for many more months, even years.

While there are legitimate concerns regarding China’s territorial claims, power projection capabilities, and pace of military modernization, it’s unclear why NATO should be responsible for countering Beijing in the Indo-Pacific and what capacities the vast majority of its members—the United States, Britain, and France aside—bring to this major undertaking.  Can an alliance which has struggled to maintain a state of readiness on the European continent extend its mission to East Asia? It took a Russian invasion of a sovereign country for Germany, one of NATO’s wealthiest member states, to finally begin a process of rearmament after decades of skimping on its defense budget. If Russia is as dangerous as NATO claims, then the last thing NATO should be doing is simultaneously seeking to contain China.

Last week’s summit wasn’t a transformational moment for NATO as much as it was a missed opportunity. Instead of encouraging Europe to take more responsibility for its own defense, commensurate with its $17 trillion GDP, about ten times Russia’s, the Biden administration chose to double down on the status quo and deploy thousands of additional American troops to the continent. The Strategic Concept could have codified a clear, detailed, comprehensive framework for safeguarding Europe’s security more effectively. What we got instead was a word salad.

Daniel R DePetris is a foreign affairs columnist at Newsweek, and a fellow at Defense Priorities, a think tank that advocates for restraint in foreign interventions.

Rajan Menon is director of the Grand Strategy Program at Defense Priorities, senior research fellow at the Saltzman Institute of War and Peace Studies at Columbia, and non-resident scholar at the Carnegie Endowment for International Peace. He is the coauthor of Conflict in Ukraine: The Unwinding of the Post-Cold War Order.