A Missing Journalist Has Created a Window of Opportunity 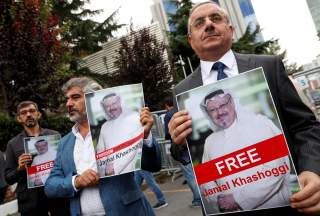 The disappearance of Jamal Khashoggi, a Saudi journalist and one time kingdom insider, has rocked Washington’s relations with Riyadh. In one twenty-four-hour period on October 9–10, National Security Advisor John Bolton, White House advisor Jared Kushner and Secretary of State Mike Pompeo all spoke with Crown Prince Mohammed Bin Salman. President Donald Trump vowed “severe punishment” if the Kingdom was found to have murdered Khashoggi in its Istanbul embassy, as has been alleged. Riyadh has said it will retaliate against any punitive measures.

What is unfolding amongst the avalanche of U.S. criticism is a post–Khashoggi Middle East. Khashoggi was an important figure, documenting the Middle East’s momentous changes between the 1980s when he spent time with Osama Bin Laden to criticizing changes in the Kingdom over the past few years. It was through officially sanctioned publications, and then as an advisor to the Kingdom’s ambassador to the UK, that he communicated Saudi views to the world. He sought to explain how the Kingdom’s religious Wahhabi roots had been influenced by the Egyptian Muslim Brotherhood and how the Riyadh was struggling for leadership in a Muslim world shocked by terror and salafist movements. In 1998 he described Bin Laden’s popularity in Saudi Arabia, saying that many people saw the extremist as a “Che Guevara” figure. By 2005 he was writing against suicide bombings, and when the Arab Spring broke out he was a source for western policymakers who were debating over what to do.

In a prescient interview in 2015 Khashoggi told The Daily Beast that Mohammed Bin Salman, then the twenty-nine-year-old son of the King and deputy crown prince, was sent instead of the king to a meeting with President Barack Obama in May. It was seen as a snub at the time. “This is also a chance for the United States to check out the rising star, MBS,” Khashoggi said, using the acronym for the crown prince. Now the star has risen and dimmed in the light of many U.S. commentators. Khashoggi is the victim of these rapid changes. His case is also symbolic of the last act of the Arab Spring and the wars it unleashed.

The Middle East is largely a three-sided state system today. On one side is Iran and its allies and proxies; including Syria’s Bashar al-Assad, Hezbollah in Lebanon, the Houthis in Yemen, and Shi’ite militias and their allies in Iraq. On another side are Saudi Arabia, Egypt, the United Arab Emirates and Bahrain, along with countries that are sympathetic to them such as Jordan and the Palestinian Authority. A third axis is formed by Turkey and Qatar, along with countries they have sought to influence beyond the Middle East, such as Somalia and Malaysia. These rivalries play themselves out on the ground. Qatar and Turkey have historically been closer to the Hamas movement that runs the Gaza Strip, while the Fatah-run Palestinian Authority was closer to Egypt and Riyadh. After the Libyan civil war broke out Qatar and the UAE also diverged over who to back and general Khalifa Haftar in western Libya became closer to Egypt’s current government. Unsurprisingly Egyptian leader Abdel Fattah el-Sisi is supported by Riyadh while Turkey was more supportive to his predecessor, the Muslim Brotherhood’s Mohammed Morsi. Israel, which has had increasingly difficult relations with Turkey over the last ten years, is widely seen as closer to the UAE and Saudi Arabia, although it has no relations with them.

The rivalry between Turkey and Saudi Arabia, the two largest economies in the region, could be seen as a rivalry for the future of the Sunni Middle East. Turkey’s current administration has its roots in political Islam, while Riyadh has sought to expel the Muslim Brotherhood. Saudi Arabia has also become more nationalist in its rhetoric, reducing relations with Canada over criticism of Saudi’s human-rights record in August. It built a Gulf coalition against Qatar, seeking to isolate the emirate in 2017, and demanding the closure of influential network Al-Jazeera. In the Middle East of 2018 the conflict is not just about religious issues and economics, but also about narratives and media.

Washington has navigated and upset this complex puzzle over the last decade. A historic ally of Israel, Turkey and Saudi Arabia, the United States angered Riyadh through its embrace of the Iran Deal in 2015. It also embraced an Iranian-backed government in Baghdad during the Obama administration and put the brakes on confronting Assad and Hezbollah. The Trump administration sought to reverse these policies, with the president travelling to Riyadh in May for a lavish summit where he encouraged the Saudis to drive out extremism. He partnered closely with MBS at a March 2018 meeting and the United States thanked Saudi Arabia for its support for rebuilding efforts and U.S. entrenchment in eastern Syria.

The United States grew closer to Saudi Arabia, after the hiatus of the Obama years, but in contrast Washington and Ankara argued over a variety of files. A May visit by the Turkish president was marred by attacks on protesters by Turkish security. The United States was also angered by the detention of pastor Andrew Brunson, who was finally released on October 12. Turkey has accused the United States of training a “terror army” in eastern Syria, claiming the United States work with the Syrian Democratic Forces which are fighting ISIS, was part of a wider U.S. link with Kurdistan Workers Party (PKK) affiliates in Syria. Meanwhile the Saudi crown prince slammed Turkey as being part of a “triangle of evil,” alongside extremists in the region and Qatar.

Khashoggi likely fell victim to these rivalries. He was a staunch critic of the current Saudi administration, telling Doha-based Al-Jazeera late last year that the kingdom should return to its religious roots and reject any rumors of warming ties with Israel.

The problem now is how the United States confronts the post–Khashoggi era. The Middle East is becoming increasingly authoritarian with the changes wrought by the Arab Spring and ISIS. Years of democracy promotion by Washington now fall on deaf ears as locals and states tend to fear the chaos that was unleashed. Symbolic of many regional trends, the Palestinian Authority hasn’t had an election since 2006 while the United States plays a key role in training its security forces. Security first, democracy postponed is today’s Middle East. Iraq has elections but they are largely sectarian. Turkey is a democracy but a coup attempt in 2016 and jailing of opposition party members and journalists have changed its character. Egypt. Saudi Arabia, and other states have cracked down on dissent in various ways.

The defeat of ISIS has transformed the region as much as the Arab Spring. It helped entrench Iranian influence in Syria, Iraq and Lebanon. It also has led to increased concern by states over the kind of religious rhetoric coming from schools and mosques. Khashoggi had advocated a kind of hybrid policy in a recent discussion at the Oslo Freedom Forum; a Turkish model without such a strong personality at the helm. He was wary of the use of technology to monitor activists and the crackdown on journalists. The post–Khashoggi era looks set to cement the stifling. The state system is retreating into a kind of ancient regime, fearful of experimenting with new models or changes.

Voices in the United States are calling for a major reprisal of relations with Saudi Arabia, asserting that the United States doesn’t need Riyadh. How does the United States balance Saudi Arabia’s increasing nationalism with Turkey’s threats to launch an operation in eastern Syria where the United States and its partner forces are located? One concern is that Washington has been crafting a policy to roll back Iranian influence and appeared to finally have that policy in place over the summer. It counted on Riyadh for support in places like Syria and Iraq. Turkey has not been supportive on the Iranian issue, instead Ankara frequently meets with Moscow and Tehran regarding Syria. Buying the S-400 from Russia was a major symbol of Turkey’s growing relationship with Russia at a time when U.S.-Russia relations are on the rocks. This puts the United States in a tough spot strategically.

Since the 1990s the United States has thought it could remake the Middle East. Yet at each turn new ideas seemed to run into cynical reality. Bin Laden used the presence of U.S. troops in Saudi Arabia after 1990s to excuse his extremist journey to 9/11. Democratization and the invasion of Iraq had the unintended consequence of aiding Iranian influence and sparking anger in the region, which was in turn used by ISIS to fuel its sectarian extremism. Obama’s decision to reverse course and talk to Tehran was then seen as abandoning the Syrian rebels and leading to Tehran’s victories. Now the reaction to Iran’s regional hegemonic pretensions is portrayed as fueling Riyadh’s brazen policies.

Judging by the past, the best U.S. reaction to the current crises with Saudi Arabia might be one that tempers a major change with something more incremental and concrete. Turkey would like to use the Khashoggi case to illustrate that Riyadh is not a reliable ally. The United States has made these pragmatic choices before. After 9/11 Washington could have come down hard on Saudi Arabia, Pakistan or other countries that were seen as fostering extremism. If Khashoggi had one message over the years, it was about pragmatism and incremental change. He sought slow change in Saudi Arabia and said Saudi Arabia should be pragmatic. The United States course must navigate the three-sided Middle East, and if it can bring two of those sides over to Washington as allies, it might be able to find a way to confront Iran’s threats. If not, then Iran and Russia will exploit the Turkey-Saudi rivalry to play them off against each other and against the United States, undermining everyone in the process. There are already indications that Riyadh and Ankara are seeking dialogue. Washington may well have a unique opportunity to sit at that table and advance its goals.