Mission Accomplished? How to Measure Success against ISIS 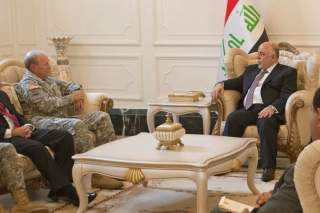 Senior U.S. officials have stated that Operation Inherent Resolve (OIR) – the war against the Islamic State in Iraq and the Levant (ISIL) – will probably last between three and ten years. As the U.S. gears up for another prolonged conflict in the Middle East against a violent extremist group, questions are rightly being asked as to how we will know if we are succeeding and indeed, what success will even look like. Not surprisingly, similar questions were asked during the Vietnam War, the Afghanistan War, and the last Iraq War. Yet assessments of each of these wars were often inaccurate and in some cases dangerously misleading. So how might we do better in the war against ISIL?

To answer that question, we must first understand our objectives in this new war. In his speech back in September, President Obama told the American people, “Our objective is clear: We will degrade, and ultimately destroy, ISIL through a comprehensive and sustained counterterrorism strategy.” In a White House fact sheet, the administration lists nine lines of effort to achieve this objective: Supporting Effective Governance in Iraq; Denying ISIL Safe-Haven; Building Partner Capacity; Enhancing Intelligence Collection on ISIL; Disrupting ISIL’s Finances; Exposing ISIL’s True Nature; Disrupting the Flow of Foreign Fighters; Protecting the Homeland; and Humanitarian Support. Together, these nine lines of effort describe what the U.S. will do to fight ISIL in the years ahead.

There has been much less discussion of what we can expect to see if these actions are successful. It is not clear what the defeat or destruction of ISIL might actually look like, or what might happen after these objectives are achieved. To be fair, irregular conflicts such as the war against ISIL are rife with ambiguity, and at their outset it is often difficult to articulate in detail what a successful conclusion of the conflict may look like. But that does not remove the impetus to strive for clarity in our understanding of the conflict and of the outcomes of our actions. While success against ISIL may be difficult to unambiguously describe at the outset of this new war, frequent assessment of the drivers of conflict, and of our campaign to counter this group, is vital to recognizing successes and failures as they occur. Assessment in this environment is difficult to conduct, but it is critical to the flexibility and adaptability that successful irregular warfare campaigns require.

The Obama administration – and its successor – will likely conduct its own internal assessments of its campaign against ISIL. But these will undoubtedly be classified and not fully available to the U.S. Congress, which needs to understand the course and progress of the war on its own terms in order to determine how best to support—or in some cases oppose—ongoing efforts. While the administration has announced goals for the war against ISIL and lines of effort to achieve them, Congress has responsibility for funding those efforts, and concurrently, for providing oversight of those efforts on behalf of the U.S. taxpayer.

In the last Iraq war, Congress tried using a “benchmark” approach to holding the Bush administration accountable for maintaining progress in the war. In 2007, Congress required the Department of Defense (DoD) to report on 18 benchmarks designed to grade the Iraqi government’s progress toward stability. Future funding of Operation Iraqi Freedom (OIF) was to be contingent on Iraqi leaders making sufficient progress toward these benchmarks. Ultimately this turned out to be more of a pro forma assessment than a basis for making decisions about the war: despite a report from the Government Accountability Office later that year titled, “Iraqi Government Has Not Met Most Legislative, Security, and Economic Benchmarks,” Congress never acted on the lack of progress toward the benchmarks.

For the war in Afghanistan, Congress took a different approach. Instead of establishing benchmarks for success, it mandated a semi-annual, publically available assessment by the DoD on its progress in conducting the war (colloquially called the “1230 Report” from the section of the military authorization bill that mandates it). This report, while a useful source of unclassified information about operations in Afghanistan, is far from an assessment that could be used to make significant decisions about the war. It is written by the same entities conducting the war (the military in theater and civilians in the Office of the Secretary of Defense) so it is burdened with subjectivity. In addition, this report only focuses on the military aspects of the war—there is no corresponding report required of other U.S. government agencies involved in Afghanistan on non-military aspects of the war. And most importantly, as in OIF, this report on Afghanistan has had little direct impact on the direction of the war or our objectives in waging it.

What, then, can we learn from our experiences with assessing progress in war over the past decade? How should we assess progress against ISIL going forward? A four-pronged approach is needed.

First, Congress should again mandate a “1230-like” report from the DoD. While this report will not be wholly objective, it will again serve as a useful source of public information on the war and the military’s efforts in waging it. In crafting the requirement for this report, Congress should ask specific questions for which it needs answers to gauge progress, vice specifying a list of numerical metrics to be collected. As we have learned in prior conflicts, overemphasis on numerical metrics leads to negative unintended consequences as people inevitably look to “game the numbers” based on institutional incentives for showing progress.

Second, Congress should mandate a “1230-like” report from the other agencies of the U.S. government involved in the fight against ISIL, most specifically the State Department, the US Agency for International Development, and the Treasury Department. Again, in these reports agencies should be directed to answer specific questions pertaining to the execution of non-military aspects of the campaign and their effects—especially on those pertaining to improving Iraqi governance, cutting off ISIL’s funding sources, and countering ISIL’s recruiting and propaganda campaigns. These reports should also be unclassified and publically available.

Third, Congress should mandate from the U.S. intelligence community a classified, detailed assessment of the strengths and vulnerabilities of ISIL and other extremist groups in Iraq, Syria, and elsewhere as required. This report should be of the quality of a National Intelligence Estimate, but conducted semi-annually, on the same schedule as the other reports.

Fourth, Congress should provide funding for a routine, independent assessment of the war that would be publically available and delivered on the same schedule as the other reports. While Congress has in the past mandated such assessments on specific topics, the closest it has come to a regular independent assessment of our recent wars is the quarterly reports it mandated from the Special Inspectors General for Iraq, and for Afghanistan (SIGIR and SIGAR, respectively). These reports, while again a useful source of public information on these wars, did not serve as true assessments of progress because they were not tied directly to our strategy and objectives in these wars. Rather, their main purpose was to inform Congress on whether funding for the wars was being spent appropriately. Establishing and funding a requirement for a regular, independent assessment of progress against OIR’s strategic and campaign objectives would allow the U.S. Congress to “triangulate” the inputs it gets from entities within the U.S. government.

As such, Congress should not rely solely on U.S. government agencies for its assessment of the war against ISIL, nor should it rely solely on an external entity. Rather, Congress should mandate the four-pronged approach described above and use it to inform public – and its own – debates on whether progress is being made against ISIL. Only by carefully and deliberately constructing these “lines of assessment” can Congress, and the U.S. public, get a clear sense of whether we are succeeding in the war against ISIL in the years to come.

Dr. Jonathan Schroden is the Director of the CNA Corporation’s Center for Stability and Development and led CNA’s independent assessment of the Afghan National Security Forces. The views expressed here are his own and do not necessarily represent the views of CNA or the Department of the Navy.