Mission Impossible: Iran Is Too Powerful to Contain 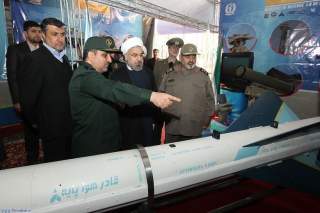 Fear of a comprehensive nuclear agreement with Iran has brought together some unlikely partners. In private, the Saudi government allegedly expressed its willingness to work with Israel to prevent a nuclear Iran, while at the same time officially welcoming the news of an agreement between Tehran and the world powers.

It’s no secret that some of Iran’s Gulf neighbors and Israel are not favorable (to put it mildly) to an agreement on Iran’s nuclear program. They fear that a deal will pave the way for the United States and Iran to become best friends, giving Tehran more clout in the region and making Washington less likely to bend over backwards for its Gulf allies and Israel.

Indeed, Khamenei's latest speech can be viewed as a testimony to the possibility of further U.S.-Iranian engagement after a comprehensive deal is reached. He noted that while the talks remain only focused on the nuclear issue, they can be a test of whether more engagement is conceivable after this process.

But with or without a deal, Iran is a force to be reckoned with in the Middle East. A comprehensive deal will actually stop the nuclear program from expanding and pave the way for Tehran’s constructive engagement with regional and international stakeholders.

The Arab Gulf states fear that they will be sold out in a nuclear agreement with Iran; that a deal would give Tehran greater room for maneuver and influence in the region. For Saudi Arabia in particular, this is compounded by recent domestic developments and changes in the Middle East, which haven’t exactly been favorable to them. After all, Iran has been dominant in Lebanon for a while now, has maintained Assad in place in Syria, and has a reason to be openly present in Iraq, because of the threat of ISIS. In fact, while the rest of the region has been dragging its feet, Tehran has been actively fighting ISIS and using it as a PR platform. More recent events in Yemen have further complicated the issue.

The nightmare of being abandoned by the United States, the Gulf States’ security guarantor and ally, is not new. In fact, some argue it is structural to the alliance. But it is most definitely overblown.

Israel, too, voiced its concerns over a potential deal with Iran. Israeli prime minister Benjamin Netanyahu accused U.S. negotiators and their partners of “giving up” on stopping the nuclear program. A deal, he said in his much-anticipated speech to the U.S. Congress, “would all but guarantee that Iran gets [nuclear] weapons, lots of them.” A Netanyahu election campaign video suggested that Israel wouldn’t exist if Washington had its way. It implies that the nation’s first prime minister, David Ben Gurion, knew better than to listen to America, and so does Bibi.

This strategy produces too little and costs too much for Israel. Today, Bibi’s relationship with the White House is strained, to say the least. The spat between them is increasingly public: National Security Advisor Susan Rice called Bibi’s speech to Congress “destructive” and partisan, while Secretary Kerry questioned his judgment on the Iraq War and the interim deal. Some now worry that the disagreement will become more pervasive.

In the meantime, while U.S. allies in the region focus on preventing a nuclear agreement, Tehran continues to consolidate its gains in the Middle East.

The nuclear agreement is not what determines Iran’s regional standing. Iran is already a dominant state in the Middle East. It’s a large, resource-rich and potentially powerful partner in what can only be described as an unstable region. Its population is large: double the size of Saudi Arabia’s. But perhaps most importantly, both to those inside and outside the region, it has the capacity to pursue a serious international agenda.

(Recommended: How Iran Would Go to War against America)

Today, U.S. and Iranian strategic interests align on some key issues, including the fight against ISIS and the postcombat mission era in Afghanistan. The rise of ISIS in neighboring Iraq demonstrated that after initial hesitation, Iran was quick on its feet and contributed all it had to check the group. Today, Tehran is the only actor involved that has enough at stake in Iraq to be willing and able to send in ground troops, should the need arise. In Afghanistan, Saudi Arabia was one of three countries to recognize the Taliban as an official government. But Iran has and continues to want the Taliban out of the picture, as does Washington.

No one is suggesting that the United States can and should go back to its pre-1979 policy toward Iran. But the two countries should work together when their national interests align. The success of the Tikrit offensive is a testament to the result of limited Iran and U.S. coordination.

Ultimately, a final nuclear deal would facilitate such coordination. For better or worse, all further engagement of Iran is predicated on the nuclear issue being resolved. But in the current climate, Tehran doesn’t need an agreement to be empowered and to strengthen its foothold in the region. While regional actors are busy trying to derail the talks to weaken Iran, Tehran is consolidating its presence and influence in the region. It would do them well to recognize that a deal would give the international community the greatest chance of affecting Iranian foreign-policy decisions in the future.