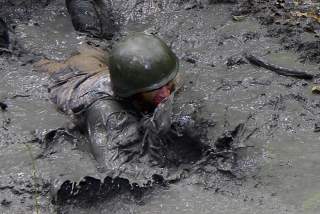 The rise of the Islamic State in Iraq and Syria has raised arguments on the part of some, including myself, that this ominous turn of events in the Middle East flows directly from the regional destabilization wrought by President George W. Bush’s 2003 invasion of Iraq, ruled by a brutal thug of a dictator who, nonetheless, was not part of the threat of jihadist Islam facing the West. Certainly, this presidential decision must rank among the five greatest foreign-policy fiascoes in American history.

That raises a couple questions: What are the other top-five foreign-policy fiascoes? And how should they be ranked within the top-five list?

Before entering into an exploration of that question, perhaps we should establish some definitions. First, we’re talking about presidential decision-making, so we should concentrate on decisions that were volitional, matters of choice and not dictated by the force of events. Second, the result must be significantly negative for the country in historical terms.

Some people might want to include, for example, James K. Polk’s actions designed to maneuver the country into the Mexican War in 1846. Certainly, the war still generates controversy among many Americans. But that war brought a vast expanse of territory into the American union, and that must be viewed as a significant benefit to a restless nation—unless, perhaps, one wants to argue that America should never have become the vibrant, expanding, great-power nation that it became. Though the war still has many critics, few have argued that those acquired lands should be relinquished.

Similarly, some might include James Madison’s decision, under pressure from a lusty Congress, to take his country into the War of 1812. Many have argued that the proximate cause of that war—British impressment of American seamen into the Royal Navy—didn’t really get settled in the peace negotiations at Ghent, and so the war was an unnecessary waste. But students of the war note that the United States gained a great deal by thwarting British plans to take control over the crucial strategic territory around the Great Lakes and into the upper Mississippi Valley. Absent that, America never could have become the nation we know today.

My own list doesn’t include any nineteenth-century presidential decisions. Perhaps that’s because the country wasn’t inclined toward the kind of foreign-policy adventurism we’ve seen since the second decade of the twentieth century. The more adventurism, it seems, the greater is the likelihood for things to go awry. But it also may be attributable, at least in part, to the zesty spirit of the nation during its first century or so. That spirit contributed to an expansionist fervor and national confidence that keep the country moving so inexorably that impediments were simply brushed aside. It isn’t difficult to avoid fiascoes when the national momentum is so high.

Had Polk’s war turned into defeat, for example, as it easily could have, then that president’s war decision would have been seen in history as a fiasco. But there was too much force and verve in the American polity to let that happen. The same is true of William McKinley’s Spanish-American War, which yielded a costly necessity to fight a subsequent insurgency in the Philippines. But the ultimate benefits of America’s venture into the world as naval power, both to the nation and to global stability, outweighed that price.

And so we turn to the twentieth century, when things didn’t go quite so well all the time. In reverse order, beginning with Number Five, here are my candidates:

Fifth-Greatest Fiasco: The Bay of Pigs Invasion of 1961. This was ill-conceived from the beginning, given that the chief mastermind of this operation, the CIA, thought it could bring about regime change on that well-fortified island on the cheap, by sending in a small force of mostly Cuban exiles that lacked the kind of support that any such invasion would require. Much has been written about the decision of John Kennedy, who inherited the planned operation, to forego any contingency use of air power if the paltry landing party encountered difficulty, which it did. But it isn’t likely that a force of fifteen hundred ill-trained soldiers was going to upend the entrenched regime of Fidel Castro, even with air support.

Scores were mowed down by Castro’s air force, and most of the invaders were captured. It was a huge black eye for Kennedy and his country, and it undermined America’s image of fortitude at a crucial time in the Cold War. It also gave an appearance to the outside world that America’s national security leadership wasn’t quite up to the task of dealing with the seemingly more sure-footed Soviets. It is likely that it led directly to the Cuban Missile Crisis of the following year, which posed a very serious danger of nuclear war, though that was averted by Kennedy’s deft handling.

Fourth-Greatest Fiasco: The Somalia Intervention of 1992. On Thanksgiving Day, George H. W. Bush, then a lame-duck president, sent 28,000 troops into a war-crushed basket-case of a country in East Africa—and set the nation upon a new azimuth of foreign policy. The ostensible purpose was to help feed starving Somalis, beset by societal chaos throughout that tragic country. Ultimately, the mission was expanded—by Bush’s successor, Bill Clinton—to deal with certain warlords thought to be most responsible for the strife and chaos. That’s when Somali tribesmen turned on the Americans in an ambush, downing two Blackhawk helicopters and pinning down a US Army task force in downtown Mogadishu. In the end, eighteen Americans were killed, more than seventy others were wounded, and Clinton promptly terminated the mission.

But its underlying significance, as initially conceived and executed by Bush, was that it was initiated without even a pretense of any U.S. national interest being at stake. This was unprecedented, as Time magazine wrote at the time. Always before there had been at least a rationale of national interest, however tenuous or debatable. But now a purely humanitarian mission emerged from official Washington, with the result that humanitarian liberals seized upon this new precedent as a foundation for subsequent calls for Wilsonian missions throughout the world, starting with Bosnia. This led to the birth of the so-called Responsibility to Protect, the notion that the United States has a responsibility to apply its military might not only to protect Americans or their interests, but also on behalf of beleaguered peoples wherever they may be.

The result is that Americans naturally resistant to such ideas of American interventionism have been thrown on the defensive to a much greater extent than previously, when it was generally understood that American might should be reserved for purposes involving American interest. This mentality has contributed to many U.S. misadventures since—including Bosnia, Kosovo and Libya. In the process, the force of realist thinking has been severely curtailed.

Third-Greatest Fiasco: Vietnam, 1965-1975. The harm this fiasco brought to America is well understood. As for the volitional nature of Lyndon Johnson’s decision to enter the fray, that requires a little analysis. After the Soviets concluded, at the end of 1948, that they would not be able to capture Western Europe, they opened up a new Cold War era marked by two Eastern Bloc endeavors. First, the Soviets would probe and drive against the West’s weak and vulnerable colonial flanks—in the Far East, the Middle East, Africa, and even Latin America—in order to unravel Western positions in various troublesome and dangerous regions. Secondly, the Soviets would consolidate and maintain their positions throughout their own empire—concentrating on armaments and strengthening their hold on the satellites—as a means of girding themselves for the protracted struggle. The aim was to draw the West into debilitating contests in places of Soviet choosing.

The danger here was that America and the West would enervate themselves by taking the bait. President Dwight Eisenhower refused; that was the meaning of his doctrine of "massive retaliation"—a giant bluff (as author Evan Thomas has demonstrated) designed to avoid getting drawn into those crises by issuing nuclear threats. It’s an open question whether he would have continued to stand by as a communist takeover of South Vietnam became likely—and even more of an open question whether he would have resorted to a nuclear response. But Johnson took the bait. Still, it must be recognized—as many historians have failed to do—the political dangers that faced Johnson had he let the North take over the South without any effort to intervene.

Nevertheless, the military strategy devised under Johnson’s leadership proved disastrous—and should have been seen as potentially disastrous even as it was being crafted. The price paid by the country as a result of this mismanagement was huge, and it was fitting that Johnson’s presidency was destroyed by it.

Second-Greatest Fiasco: U.S. Entry into World War I: As war raged in Europe, President Woodrow Wilson sought to get America into the picture as a mediator among the parties, much as Theodore Roosevelt had done to help end the Russo-Japanese War. When the parties declined his entreaty, he resolved to get the United States into the war on the side of the Allies. He did this by manipulating neutrality policies to favor the British, which predictably put Americans at risk as Germany sought, through submarine warfare, to interdict war supplies from getting to Britain. U.S. entry promptly tipped the scales against Germany, which consequently experienced not only defeat but a national humiliation. Wilson thought he could control the outcome of the Versailles conference to settle war matters, but events quickly slipped from his grasp, and the German humiliation was codified in provisions that pretty much guaranteed another war.