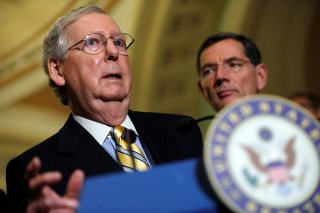 Turns out a week isn’t quite enough time for the Senate to overhaul one sixth of the nation’s economy. Mitch McConnell acknowledged that on Tuesday when he announced with great lack of fanfare that the Republican health bill, the Better Care Reconciliation Act (BCRA), would not be voted on before the July 4 recess as was the promulgated goal. This concession probably wasn’t much of a concession at all. McConnell knows his caucus well enough to understand that such a hasty vote was always impossible; he likely intended the deadline to pressure dissenters, nothing more.

It may have been an effective tactic. No sooner had the Senate majority leader announced the vote was off than the dam cracked, the water roared out and three new Republican senators announced their opposition to the BCRA. Jerry Moran of Kansas, Shelley Moore Capito of West Virginia and Rob Portman of Ohio are all freshly “no,” little surprise in the case of the latter two given how reliant their states are on Medicaid. They’ll join the conservative quartet of Rand Paul, Ted Cruz, Mike Lee and Ron Johnson, along with moderate Susan Collins and electorally vulnerable Dean Heller, in dissent.

It sounds like a full-fledged mutiny and it’s certainly a steep hill for Senate leadership to scale, given that they can only lose two Republicans before the BCRA falls below fifty votes and Mike Pence can no longer break a tie. But if anyone knows how to glue together this rowdy caucus, it’s McConnell, who retains his position as Senate majority leader in the teeth of conservative skepticism because he’s a legislative grandmaster. Where should he begin? Johnson on MSNBC Wednesday morning sounded like he was gravitating back towards the BCRA and even defended it against the CBO, so he’s a good place to start. And let’s not pretend the serpentine Ted Cruz is going to be anything except a “yes” once this bill is brought to the floor.

Who else? Senator Susan Collins’ primary objection is that the BCRA would strike one year’s Medicaid funding for Planned Parenthood; she’s to introduce an amendment that will restore the money with Lisa Murkowski of Alaska. But that’s a dangerous rope for McConnell to tug on: if he relinquishes funds for America’s biggest abortion provider, he could end up forfeiting more mainstream pro-life Republicans, to say nothing of the conservative four. The easier route would be to tease out a compromise that eliminates some of the more general Medicaid cuts while still preserving enough reform to sway irascible conservatives. The Medicaid reductions already aren’t scheduled until 2021, and anyone who’s observed Congress’s Adam Vinatieri-caliber can kicking over the past decade knows chances are they won’t happen then either. Rust Belt moderates likely don’t have anything to worry about.

And it’s here that we approach the conundrum with the BCRA: it isn’t all that different from the legislation it purports to repeal, and following the revisions McConnell has to make, it will be even less so. The exchanges are preserved, many of the subsidies remain, the individual market is little changed. The individual mandate is canceled but replaced by a barbarous lockout provision that prevents customers from buying health care for six months if they don’t maintain continuous coverage. And the real flesh and blood of Obamacare, the Medicaid expansion, which insured the vast majority of new enrollees under the law, has yielded nothing except a punt.

In which case, one wonders, what’s the point? Republicans have a formidable electoral mandate to repeal Obamacare but an ornamental bill passed so they can unfurl a “Mission Accomplished” banner seems worse than no bill at all, especially when you consider the latest CBO report. To ascribe pinpoint accuracy to the Congressional Budget Office is to live in Burke’s age of sophists, economists and calculators, but their report on the BCRA does contain some portentous signposts. Deductibles, for example, exploding under Obamacare, are likely to balloon even further for low-income consumers because premium subsidies will cover fewer medical costs, shifting the burden of paying for even more services onto the insurance companies. Larry Levitt of the Kaiser Family Foundation says those with incomes up to 150 percent of the poverty line would see their deductibles increase from an average of $255 to over $6,000.

This bill is great for someone like me who’s young and seeking to dodge deliriously high premiums that don’t even wholly cover my one annual doctor’s visit. Older and sicker Americans, however, are likely to see their premiums and deductibles spike, a consequence of preserving Obamacare’s essential architecture while slashing away at its provisions that, however coercive and wrong they might be, still shore up coverage. Centrists are forever clamoring for compromise solutions; this bill demonstrates that sometimes the very worst outcomes are found in the mediocre middle. Mitch McConnell may pull off a legislative checkmate here but we shouldn’t forget that it’s voters who will get the final move.