Mitch's Nightmare: Will Donald Trump Run for President in 2024? 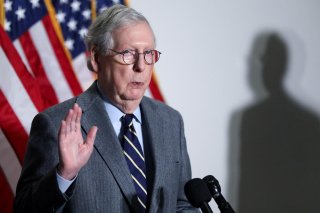 Former President Donald Trump spoke with conservative media Wednesday and repeatedly swerved away from questions about a possible 2024 White House run, insisting that it’s “too early to say.”

In an interview with Newsmax anchor Greg Kelly, Trump diverted away from questions about his 2024 presidential candidacy on three occasions and instead pointed to his polling figures.

Trump repeatedly boasted about his polling support, although new polls have indicated that a slight majority of Americans backed a Senate impeachment conviction and efforts to ban him from holding office in the future.

The former president has been on a digital hiatus ever since he left the White House last month, but Trump effectively ended the break when he released a seething statement against Senate Minority Leader Mitch McConnell (R-Ky.), noting that any Republican Senators who stick by the leader’s side “will not win again.”

“The Republican Party can never again be respected or strong with political ‘leaders’ like Sen. Mitch McConnell at its helm. McConnell’s dedication to business as usual, status quo policies, together with his lack of political insight, wisdom, skill, and personality, has rapidly driven him from Majority Leader to Minority Leader, and it will only get worse,” Trump wrote.

The former president’s remarks came after McConnell notably soured on Trump following the Jan. 6 Capitol assault, distancing himself from his fellow colleague after four years of remaining wholeheartedly loyal to him. While the GOP leader voted to acquit Trump at the Senate impeachment trial, McConnell said that the former president was “practically and morally responsible” for the Capitol siege.

But before Trump left Washington, D.C., he made it clear that “we will be back in some form.” In recent weeks, he’s stayed silent about his potential 2024 candidacy, leaving voters to question whether he will follow through with his previous teases of running for a non-consecutive term.

“I am not sure that Donald J. Trump is really laser-focused on anything in particular at this moment other than gaining some vengeance on those he believes have betrayed him. His recent statements suggest he is angry at those, like Mitch McConnell, and other Senate and House Republicans, who were not willing to support this fantasy of the ‘stolen election,’” Audrey A. Haynes, associate professor of political science and director for the applied politics certificate program at the University of Georgia, said.

Media reports have indicated that Trump’s current post-White House plans consist of punishing congressional Republicans who separated from him by either voting to impeach or convict him for his involvement in the Capitol riots. GOP Reps. Liz Cheney (Wyo.) and Adam Kinzinger (Ill.) are just a few that are on Trump’s chopping block, as the two formed part of a slender group of ten House Republicans who joined with Democrats to vote to impeach Trump.

Trump’s suddenly changed approach to jumping on a 2024 presidential train could also be due to his virtual ban on social media platforms, including Twitter.

“There could be a number of reasons why President Trump has backed off from announcing a presidential run in 2024,” Jamie L. Carlson, political science professor at UGA, said. “For one, he may have realized that such a campaign would be increasingly difficult without access to social media via Twitter. Recall that Trump received approximately $2 billion in free media coverage during the 2016 primaries as a result of his use of Twitter and roughly $5 billion in free coverage during both stages of the campaign. That would be difficult to replicate given Twitter’s current restrictions on his account.”

At one point, Trump had more than eighty-eight million Twitter followers, an account that was used as a strong tool to communicate with supporters.

The former president has also been hit with a lawsuit connected to allegations that he incited last month’s riot on the Capitol, with the likelihood of more to unravel in the future.

“I think that he may be coming to terms with some of the post-presidency realities that he is facing (legally and financially),” Jacob Neiheisel, an associate professor of political science at the University of Buffalo, said. “It was also never really clear to me that he enjoyed governing as much as he did campaigning. My guess is that he may parlay the following that he has garnered into a media role as something of a kingmaker on the Republican side rather than take another run at the White House.”

Other experts echoed Neiheisel’s remarks, noting that his tax scandal still looms and that all of these negative associations could largely impact his political ambitions.

“But as others have noted, Trump is now unprotected by his status as president and there are numerous legal cases focused on him at this moment—from civil to potentially criminal lawsuits,” Haynes said. “He has a large loan coming due. His taxes are still under scrutiny. His actions on Jan. 6 and prior are still under the magnifying glass as well. These may certainly impact his political brand and the level of support he has. His numbers and the numbers of the Republican Party in terms of negative assessments have increased post-Jan. 6.”

But while there are several jabs being punched at his reputation, Trump still holds an iron-like grip over the Republican Party, with his support and rhetoric dictating the popularity and presence for future GOP leaders.

“In my view, it really depends on whether or not a charismatic Republican leader emerges that can unify Republicans,” Haynes said. “I suspect that ’22 will have some impact on which Republicans think they can run in 2024. I am sure Ted Cruz and Josh Hawley, while coveting the MAGA brand, would really prefer that Trump not run so that they have a shot. They want his voters. Not him.”