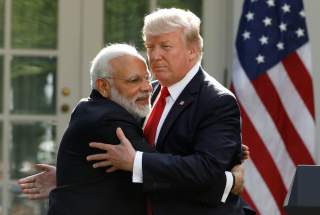 History’s largest election has swept Narendra Modi’s Bharatiya Janata Party back to power in India. More than six-hundred-million Indian voters cast ballots that decisively gave the ruling party a second consecutive lower-house majority for the first time in a half-century. Modi, who ran in part on a national-security platform, returns with a renewed mandate for international leadership, including closer strategic ties with the United States. That represents a major opportunity for Washington—if both sides can avoid the landmines.

America’s relationship with India has the greatest potential upside of any in the world today. Facing the reality of long-term competition with an assertive and illiberal China, strategic logic compels a closer bond with the Indo-Pacific’s largest democracy, one that is increasing its economic and military muscle. For all the partisan disagreements bedeviling Washington, successive presidents from Bill Clinton through Donald Trump have sustained progress in deepening India ties.

Indeed, the Trump administration’s approach to New Delhi represents something of a bright spot, and it enjoys the support of Capitol Hill. Washington now consistently describes America’s interests as residing in the Indo-Pacific region, and it renamed the former U.S. Pacific Command as Indo-Pacific Command. There is also a growing realization that closer ties with India can make America stronger in a contested Asia.

On specific issues too, there has been steady progress in recent years. The Trump administration made India eligible for space and defense technology under a “strategic trade authorization,” building Barack Obama’s designation of India as a “major defense partner.” Washington’s concerns about China’s Belt and Road initiative mirror worries in New Delhi, and the administration has revived the Quad meetings, which also pulls in Japan and Australia, as a vehicle for cooperative action. In February, when a deadly terrorist attack in Kashmir elicited a direct India-Pakistan military clash, the Trump team and the U.S. military ably combined public support for New Delhi with private calls to both sides urging restraint. Moreover, this month, the Indian Navy joined the United States, Japan and the Philippines in a joint exercise in the South China Sea.

But last week’s election also creates new possibilities. Modi favors closer alignment with the United States, while also wishing to maintain a healthy dose of national autonomy. Support for closer ties with America is growing among India’s strategic elite, but many of Modi’s compatriots remain skeptical—and perhaps even nostalgic for their country’s old Moscow ties. A newly empowered prime minister, whose vision of a muscular foreign policy resonated with voters, may now more room to resist Chinese assertiveness and cultivate closer U.S. bonds.

With the China competition growing more heated by the week, the imperative for the United States and India to step on the bilateral accelerator is strong. That requires, however, navigating some sizeable landmines strewn across the short-term agenda.

Many of these landmines were created by the Trump administration’s willingness to flex its economic muscle abroad. New Delhi has eliminated its imports of Iranian and Venezuelan oil, but it is worried that Washington may not exempt the Indian-backed Iranian port of Chabahar from sanctions. Furthermore, India is set to spend $5 billion on Russia’s S-400 air defense system—the same one whose purchase by Ankara is currently roiling U.S. relations with Turkey—and requires a waiver from Congressionally-mandated sanctions. Currently, India is the world’s biggest beneficiary of the Generalized System of Preferences program, which allows certain goods duty-free access to the U.S. market, but the Trump administration wants to end it. Additionally, last week Washington added India to a watchlist of countries suspected of manipulating currency values.

If and when there is a China trade deal, then it is all too easy to imagine India, and its sizeable trade surplus, moving into the president’s crosshairs. But allowing such issues to cloud the geopolitical promise of a closer alignment would represent a major mistake.

There are longer-term pitfalls, too. The rise of Hindu chauvinism, and American worries about the freedom and security of India’s sizeable Muslim minority, could undermine the natural affinity between two liberal democracies. Also, while the postponed Indo-Pakistan diplomatic dialogue is likely to resume soon, the subcontinent remains just one terrorist attack away from crisis or even conflict.

Yet the overall picture is extraordinarily promising. After India’s historic election, now is the time to move from seizing bilateral opportunities as they arise to imposing a strategic framework and timeline on ties with New Delhi. Leaders on both sides should sketch out a maximalist vision what is possible over the next decade, with concrete steps along the way as they work toward it.

There seems to be all too few win-win possibilities in the world today—growing Indo-American relations are an exception. A closer bond, anchored by a long-term U.S. commitment to presence and influence in the Indo-Pacific region, is key to effectively competing with China. It’s also smart on its own terms. With Modi’s big win, it’s time to get moving.

Richard Fontaine is chief executive officer of the Center for a New American Security.
Image: Reuters