Moldova has Become a Geopolitical Battleground between Russia and the West 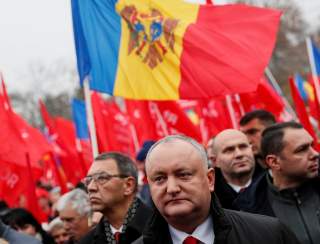 From the most impoverished European nation to one of the unhappiest places on earth, Moldova has attained no shortage of dubious milestones in its brief post–Soviet history.

In 2000, the World Bank characterized Moldova as a “captured state,” one in which the levers of government are held hostage to powerful private interests. Moldova’s political dysfunction is, at least partly, the result of deep-seated social cleavages. The population remains sharply split between two mutually exclusive developmental paths: integration into western institutions with the eventual goal of EU accession, or joining the emerging Russian sphere of influence through membership in the Moscow-chaired Eurasian Economic Union.

Over the past decade, Moldova has become a geopolitical battleground between Russia and the West. The former is represented by the Moldovan Socialist Party (PSRM), while the pro-Western ticket has long been split between a colorful cast of self-declared, pro-European parties.

But Moldova’s standard order of business was turned on its head when, for the first time since the Crimean annexation of 2014, Brussels, Washington, and Moscow united to block an upstart oligarch from seizing the reigns of government after months of parliamentary deadlock following an inconclusive election. What does Moldova’s 2019 Constitutional Crisis have to teach us about great-power cooperation in the post–Cold War era?

The crisis dates back to the February 2019 parliamentary election. The Socialists won with a razor-thin margin at 31 percent of the vote, not nearly enough for a majority government without forming a coalition with either one of the pro-Western runners up: ACUM or the Democratic Party, which had garnered 26 and 23 percent respectively. Coalition talks stalled amid allegations of electoral fraud; the most serious of these were leveled against the Democratic Party, led by influential businessman Vladimir Plahotniuc. When the socialists and ACUM reached a coalition deal on June 8 with ACUM leader Maia Sandu as prime minister, Plahotniuc initiated what can only be described as an attempted coup. Moldova’s Constitutional Court, which Plahotniuc had earlier packed with his supporters, blocked the PSRM-ACUM coalition due to it allegedly being filed after the deadline. Acting through his longtime proxy, Prime Minister Pavel Filip, and Democratic Party member, Plahotniuc dissolved parliament and called for snap elections to be held in September.

Plahotniuc had counted on Western support—particularly, on EU institutions—to underwrite this scheme on account of his self-professed pro-European leanings. But the Moldovan oligarch had overplayed his hand. The EU had lost all patience with Plahotniuc’s long-standing pattern of blackmail and intimidation, not to mention his habit of buying out entire branches of the Moldovan government. The ACUM party, while not as influential as the sprawling empire that Plahotniuc carved out for himself, is not nearly as compromised as the Democratic Party and thus a safer candidate for long-term EU and U.S. support. Meanwhile, the Kremlin perceives Plahotniuc as an anti-Russian political actor and distrusts him for his alleged past dealings with Russia-connected Moldovan businessmen.

Having lost all international support, Plahotniuc was at the end of his rope. He then turned to a desperate, final gamble: using Moldovan president Igor Dodon as an intermediary between himself and the Kremlin, Plahotniuc solicited Moscow’s imprimatur for his regime in exchange for a pro-Russian policy orientation and the promise of a federalization scheme for the Russian breakaway region of Transnistria. But the Russians, who already have a reliable Moldovan proxy in the Socialist party, had little to gain from a partnership with as controversial and demonstrably unreliable a figure as Plahotniuc. The Kremlin rebuffed his offer, instead putting its weight behind the Western-backed PSRM-ACUM coalition. With no more cards left to play, the Democratic Party government resigned; Plahotniuc left the country shortly afterward.

What are we to make of this remarkable turn of events? First, the good news: for the first time since the Crimean annexation of 2014, Russia and the West were able to successfully come together to defuse a major international crisis. But lest we overstate the significance of the Moldovan compromise and what it means for the future of Russian-Western strategic discourse, there are several caveats to be addressed.

This unusual convergence of international interests occurred under a set of Moldova-specific circumstances that cannot be easily replicated elsewhere. For one, it took the prospect of total state capture at the hands of a rogue oligarch for Russia and the United States to put aside their differences and agree to a compromise governing coalition. Neither Russia nor the United States are strangers to tolerating unsavory entities out of geopolitical necessity, but Plahotniuc was undone by his superfluous ways. Both Russia and the West had better and more reliable options than him, in the form of the socialists and ACUM.

This phenomenon is harder to replicate in, say, the neighboring battleground state of Ukraine, where there is no viable third option; there is no “wild card” candidate or political force for the great powers to unite against. A similar kind of unifying effect could perhaps be achieved with another type of external shock—for instance, a war, global recession, or grand bargain on the scale of the Helsinki accords—but it remains difficult to reach meaningful diplomatic arrangements when both sides are constrained by a narrow political path dependence.

The Moldovan Crisis illustrates the crucial importance of diplomatic back channels and lower-order communications. Neither Presidents Donald Trump nor Vladimir Putin publicly involved themselves in any stage of the negotiating process, instead choosing to act through professional diplomats who ironed out the coalition details in a series of small, private meetings. Maintaining a degree of separation between high-profile politicians and ongoing, sensitive negotiations is politically healthy, especially in the American domestic context; it offers governments greater diplomatic flexibility and frees them from the brunt of the unforgiving, frequently sensationalist scrutiny of the 24/7 news cycle.

As unprecedented and refreshing a development as the compromise is, the basic prerequisites for a lasting settlement over Moldova remain unfulfilled. The most pressing problem is the separatist Russian enclave of Transnistria, posing an active territorial dispute that must be resolved for Moldova to have a viable pathway into the European Union. The socialists and

ACUM have yet to demonstrate any capacity to enter good-faith negotiations over Transnistria. Meanwhile, the window for a Russian-Western settlement concerning Transnistria has progressively shrunk over the past few decades. As it stands, the PSRM-ACUM coalition is more of a modus vivendi than a comprehensive agreement on Moldova’s post–Soviet future.

In the early 2000s, the Putin administration refused to consider any federalization proposal that did not treat Moldova and Transnistria as equal participants. Then, In 2003, longtime Putin ally and current Russian deputy prime minister Dmitry Kozak drafted what came to be known as the Kozak Memorandum. Under this asymmetric federalization scheme, Transnistria would become a “state entity” within Moldova while retaining broad cultural-linguistic autonomy and wielding a considerable degree of veto power in the Moldovan senate. Negotiations were in their final stretch when Washington abruptly pressured Moldova to call of the deal. As Colin Powell explained to Moldovan President Voronin, granting Transnistria this degree of influence over Moldovan politics would threaten Moldova's European integration.

As far-reaching as these concessions appear, they pale in comparison to current Russian designs on Moldova. If Kozak’s 2003 proposal recognized the modest limits of Russia’s power projection capabilities and sought to work with the West to jointly administer Moldova’s post–Soviet transition, then today’s Kremlin believes that it has the capacity and resources to pull Moldova into its sphere of influence. Even within the current coalition government, the socialists enjoy a comfortable parliamentary advantage over ACUM; as the new government begins to delineate administrative roles, the effects of the socialists’ numerical superiority are already being felt.

With Russia’s growing international ambitions and the Socialist party’s consistent electoral success, the Kremlin no longer sees federalization as an end in of itself. Instead, Russia is interested in federal status as part of a package deal reaffirming Moldova’s permanent renouncement of NATO membership aspirations and a host of other geopolitical concessions.

All of the involved parties recognize that there can be no Shanghai Communiqué model for Moldova. Transnistria cannot remain a kind of a “sovereign entity” over which the great powers politely agree to disagree; its location as a landlocked, politically volatile strip of land between Ukraine and the rest of Moldova would not allow it. Until that territorial dispute is finally put to rest, any Russian-Western accord over Moldova will prove to be short-lived.