Is Moldova Next? Brigadoon in a Tough Neighborhood 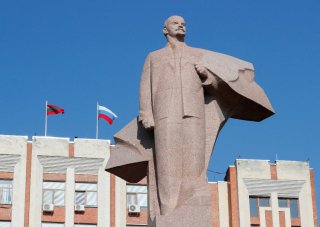 In the Scottish legend of Brigadoon (made famous by the Lerner & Loewe musical), an enchanted village appears for one day every one hundred years but is at other times unknown to the outside world. In southeastern Europe, there is a tiny place that is getting the world’s attention. It is not enchanted—it is in fact it is one of Europe’s poorest states—but Moldova has an outsized significance for Europe and beyond. By virtue of its history, Moldova has been a marker of Russian power and, to many, it looks like a mini-Ukraine, next in line for the fate of its neighbor. Like the legendary Brigadoon, contemporary Moldova is in danger from outsiders.

A Marker for Russian Power

Until the nineteenth century, the region known as Moldavia was a tributary to the Ottoman Empire. But the people there were overwhelmingly Eastern Orthodox and spoke a language directly descended from Latin (written with Cyrillic characters). Over the past two centuries, these lands were sliced up and transferred back and forth between Russia and its adversaries, usually other empires.

After a Russo-Turkish war in 1812, parts—generally referred to as Bessarabia—were brought into the Tsarist empire. They were then handed back when Russia was defeated in the Crimean War in 1856. Soon after, the two semi-independent principalities of Moldavia and Wallachia outwitted all the empires, elected the same leader, and formed modern Romania. To put the stamp on their national emergence, the Latinized version of the language replaced the Cyrillic. Then, after yet another war against the Turks in 1877-78, the Russian Empire took Bessarabia back into Russia, where it reapplied the Cyrillic alphabet and suppressed the use of Romanian.

World War I brought a shattering of the Russian Empire, and Romania was able to gain Bessarabia (along with Bukovina and Transylvania) as the price for joining the war on the Allied side. The newly established Soviet Union, withdrawn from the war and convulsed in its own social upheaval, could do little at that time except sponsor the creation of a Moldavian Autonomous Republic inside the USSR.

The opportunity soon came to undo past losses. Josef Stalin, whatever his socialist pretensions, channeled the tsars to retake territories through one of the secret sections of the infamous Molotov-Ribbentrop Pact of 1939 with Nazi Germany. The Moldavian marker moved again, in Russia’s favor and a new blended Moldavian Soviet Socialist Republic was born. During the postwar occupation of the new territory, Soviet leaders used arrests, deportation, and induced famine to terrorize the population and eliminate possible challenges. In an effort to forestall the possibility of ethnic solidarity, “Moldavian”—written in Cyrillic characters—became the official language. Soviet leaders colonized the region with ethnic Russians and Russian-speaking officials and harshly repressed assertions of Romanian identity. Both the language and the people of this republic were labeled as being distinct from the Romanians just across the border.

But, as the legend of Brigadoon demonstrates, national aspirations, though silent, can still reappear. Under reforms introduced by Mikhail Gorbachev in the late 1980s, demands were strong in Moldova for the return of the Latinized script—and thus Moldovan/Romanian identity. The change was adopted in 1989 but sparked alarm among some Ukrainians, Russians and Gagauz who together accounted for nearly 30 percent of the population. Then, when the USSR disintegrated and Moldova appeared as an independent state (1991), many of these non-Romanians feared the loss of their status or worse, absorption of the new state into Romania.

Almost immediately, Moldova suffered a secession from its secession. A brief war in 1992 resulted in the emergence in the east of Transnistria as an independent, if unrecognized, state. The war ended with the stationing of some 1,500 Russian “peacekeeping” forces in the region. They are still there.

At first glance, this would seem to make Moldova a “mini-Ukraine” and thus next in line for reabsorption into Vladimir Putin’s new empire. Like Ukraine, the state is new, never existed as an independent country, and spent decades as a Soviet republic. As in Ukraine, the Moldovan central government does not effectively govern part of its territory. The country’s population (c. 2.6 million) is three-fourths Moldovan/Romanian, but in Transnistria (c. 500,000) it is roughly one-third Russian and one-quarter Ukrainian. There, Russian is the main administrative language and “Moldovan”—Romanian in the Cyrillic script—lives on.

Like Ukraine, Moldova is eager to join the European Union. It signed a Deep and Comprehensive Trade Pact with Brussels in 2014, when Ukraine did, and this year formally applied to join. Also, like Ukraine, but under much less promising economic circumstances, Moldova has sustained a functioning democracy. According to Freedom House, Moldova’s ranking on a combined index of democracy is well above virtually all the non-EU ex-Soviet states except Ukraine.

It is, of course, precisely this democratic success, as in Ukraine, that most frightens Putin. But unlike in Ukraine, Putin cannot claim the ethnic affinity (or dominance) that he professes with Ukrainians. Moldova shares no border with Russia and the country has a co-ethnic external “referent” country, Romania, a NATO and EU member. One of every four Moldovans holds a Romanian passport.

As in Ukraine, the economic influence of the West has grown in the past decade; the EU is the country’s largest trade partner and biggest investor. Moldovans—including those from Transnistria—can travel to the EU without visas. The most recent presidential (2020) and parliamentary (2021) elections brought success to unabashedly pro-EU candidates and public opinion polls strongly support EU membership. Facing critical economic repercussions from the war in Ukraine—including nearly one-half million refugees—and related blockades, Moldova has received more than €200 million in aid from Brussels.

The story is not the same with NATO. Moldova is even less likely than Ukraine to be able to join. Unlike Ukraine, the country’s constitution mandates neutrality. Before the recent war, polls showed less than one-fifth of the country favored joining NATO, a number that has not increased significantly. Though NATO is formally open to new members, the encouraging declaration issued to Georgia and Ukraine in 2008 did not include Moldova. Militarily, the country brings no advantages to NATO. Its tiny army is poorly equipped, and Poland and Romania provide more significant land and sea borders with Ukraine.

Nevertheless, for NATO and the West, blocking Russian territorial designs in Moldova would be important. Policymakers took note when a Russian general indicated that taking southern Ukraine would be “a way out for Transnistria” and, further, claimed that Russian speakers were being oppressed there. On cue, propaganda organizations labeled Moldovan president Maia Sandu a Nazi. Claims like these are ominously reminiscent of those made about the Donbas region in Ukraine. These assertions, along with recent unexplained explosions in Tiraspol, could provide possible excuses for Russian intervention. Militarily, Russian control of Transnistria would significantly advantage the Russian position in southern Ukraine and make the major target there, Odessa—40 miles away—much more vulnerable. Taking over the whole country would create a 400-mile border with Romania, something lacking since 1991.

For now, though, a military threat to Moldova seems implausible. For one thing, the Russians have all they can handle—and much that they cannot—in Ukraine. They have not demonstrated the capacity to move large concentrations of troops across the country to effective purpose and, unlike in Ukraine, Russia has no common border with Moldova. And, looking closely, Thomas de Waal has pointed out “[a]lmost all the 1,500 soldiers there designated as ‘Russian’ are in fact locals with Russian passports.” Leadership in neither Moldova nor Transnistria seem eager to duplicate the bloody internal conflict seen in Ukraine.

Still, Moldova is small, poor, and vulnerable to economic pressure from Russia. The country covers most of its energy needs with gas from Russia’s Gazprom. This is provided virtually free to Transnistria, where the country’s main electricity generator is located, but at a steadily increasing price to Moldova itself. Some efforts have been made to seek other suppliers, but the war next door has limited those possibilities. Remittances, which provide more than 16 percent of the country’s GDP, have fallen since the war began. The World Bank predicts virtually no growth this year.

Like the once-in-a-hundred-year Brigadoon, the thirty-year existence of independent, democratic Moldova carries a significance that is more symbolic than concrete. Given its past, its heterogeneous makeup, weak economic legacy, and location in a turbulent neighborhood, its very endurance is something miraculous. What it will look like in the future is, to a large extent, dependent on forces that surround it. Like that mythical village, contemporary Moldova is an example of what courage and imagination can create, if only the world will just leave it alone to do so.